Chinese ship accused of espionage: Sri Lanka at the heart of the Sino-Indian rivalry

"Long live the friendship between China and Sri Lanka," read a red and white banner hung from the upper deck of the Yuan Wang 5 as it arrived Tuesday (August 16) at the port of Hambantota, Sri Lanka. 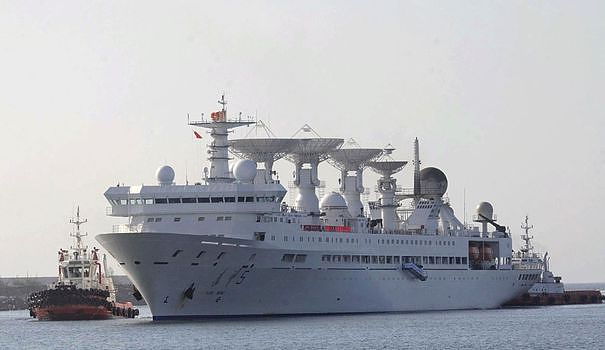 "Long live the friendship between China and Sri Lanka," read a red and white banner hung from the upper deck of the Yuan Wang 5 as it arrived Tuesday (August 16) at the port of Hambantota, Sri Lanka. This Chinese research vessel was welcomed with great fanfare by dancers, traditional musicians and several deputies on a red carpet. During the ceremony, the Chinese ambassador to the country, Qi Zhenhong, said that the visit of the Yuan Wang 5 falls within the scope of "normal exchanges between the two countries". But this relationship is not to please everyone, starting with India and the United States, which suspect Beijing of engaging in espionage activities.

The ship left Jiangyin in China on July 13 and was originally scheduled to call on August 11 at the Sri Lankan port of Hambantota. Her docking was delayed for nearly a week in the face of Indian protests. After intense diplomatic negotiations, it was agreed that he could berth at the port until August 22, on the condition that he does not carry out any research while in Sri Lankan waters, port officials said. . The boat will also need to keep its automatic identification system on.

On the Chinese side, the Ministry of Foreign Affairs argues that the Yuan Wang 5's marine research activities are "in accordance with international law". "They do not affect the security or economic interests of any country," added his spokesperson, saying that "third parties do not have to interfere". On the Indian side, however, the CNN-News18 channel claims that it is a dual-use spy building, used for space and satellite tracking and used specifically for intercontinental ballistic missile launches.

The rivalries between the two Asian giants are not new to Sri Lanka and illustrate a real war of influence. Beijing remains Colombo's main bilateral creditor, holding more than 10% of its foreign debt. In 2017, the island state found itself unable to service its $1.4 billion debt contracted with China for the construction of Hambantota and had to cede the port for 99 years to a Chinese company. It is thus part of the "pearl necklace" of the New Silk Roads, aimed at economically linking China to Europe.

Sri Lanka, plunged into its worst economic crisis, thus remains dependent on Beijing's support to restructure its debt - of the order of 51 billion dollars in mid-April - before being able to claim aid from the International Monetary Fund. (IMF). "India and China are both helping us in this very crucial period," Sri Lankan government spokesman Bandula Gunawardena said a few days ago. Particularly in maritime security and cybersecurity, two areas in which India is seeking to establish itself.

On August 15, New Delhi offered a maritime reconnaissance aircraft to Sri Lanka to enhance cooperation between the two countries. The device, intended for surveillance, landed on Indian Independence Day but also the day before the arrival of the Yuan Wang 5. This donation is part of the mission "Security and growth for all in the region", launched in 2015 by the Indian Prime Minister, Narendra Modi. The latter is also seeking international support to counter Chinese influence in Indian waters. During his meeting with Emmanuel Macron on August 16, Sri Lanka was indeed on the menu of discussions.