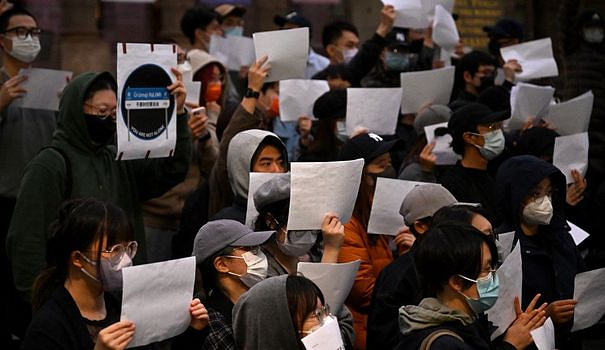 The symbol spread like wildfire. A simple white sheet brandished with determination by hundreds of demonstrators in several Chinese cities. In Beijing, Shanghai, Wuhan and even Urumqi, a crowd of residents responding to calls made on social networks took to the streets on Sunday, catching the police off guard. Among the slogans chanted in unison: "No Covid tests, we are hungry!", PCC (Chinese Communist Party, editor's note), withdraw!" or "No to confinements, we want freedom".

For BBC journalist Stephen McDonell, present on the spot, these blank sheets of paper are not only "a way of illustrating dissent reduced to silence" but also "a finger of honor to the authorities, as if to say: " Are you going to arrest me because I am holding a sign that says nothing?", He analyzes on Twitter. White is also a color associated with death and mourning in China.

Faced with the 30,000 cases of Covid recorded in recent days, a figure close to the record in the country, the Chinese authorities have tightened their measures again in an attempt to stem the circulation of the virus, and are establishing new confinements, teleworking and closing schools. To the chagrin of the economic sectors and the population.

These gatherings are the culmination of a popular discontent that has been simmering for months in China, one of the last countries in the world to apply a strict “zero Covid” policy, with repeated confinements and quasi-PCR tests. daily newspapers of the population. “People have now reached a boiling point because there is no clear direction on the way forward to end the zero Covid policy, explains to AFP Alfred Wu Muluan, expert in Chinese policy at the National University of Singapore. The party underestimated the public's anger".

A video widely circulated on the Internet, which AFP has geolocated to Shanghai, shows protesters shouting "Xi Jinping, resign!" and go after the Chinese Communist Party. A very rare demonstration of hostility against the president and the regime in the economic capital of the country, subjected at the beginning of the year to an exhausting two-month confinement.

Many Chinese have had to use their imagination to circumvent censorship. While some preferred the white A4 sheet of paper, others posted white squares on their WeChat profile. Students from the prestigious Tsinghua University took pictures of themselves showing "Friedmann's equations", named after a physicist who evokes "freed man" (free man) or "freedom" (freedom) in English.

Chinese authorities' strict control over information and health restrictions on travel within the country make it difficult to verify the total number of protesters over the weekend. But such a widespread uprising is extremely rare in China, given the crackdown on any form of opposition to the government. By its extent on the territory, the mobilization seems the most important since the pro-democracy rallies of 1989, harshly repressed.

The deadly fire in Urumqi, capital of Northwestern Xinjiang Province, has sparked anger among many Chinese, with some blaming health restrictions for blocking relief work. Perhaps a sign of a desire for appeasement, these restrictions have finally been relaxed in this city where, from Tuesday, residents will be able to travel by bus to do their shopping and parcel deliveries can resume.

In Shanghai, one of the streets occupied by the crowd during the night was now surrounded by palisades to prevent any new gathering. During the day, three people were arrested near Urumqi Street, at the very spot where a demonstration took place on Sunday. A BBC reporter in China, who was covering the protests in Shanghai, was even arrested and "beaten by the police", according to the British media. British Enterprise Minister Grant Shapps called the violence "unacceptable" and "worrying".