Burkina Faso: five questions about the second coup of the year

Yet another coup on the African continent. 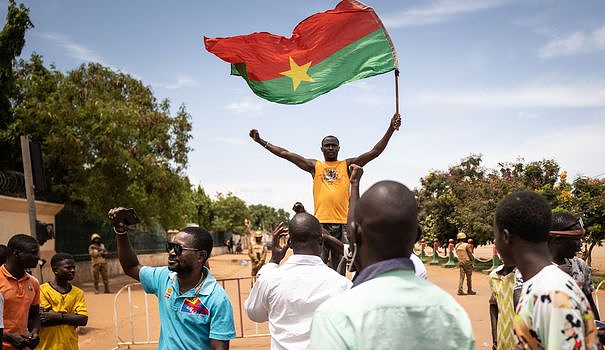 Yet another coup on the African continent. Burkina Faso experienced, Friday, September 30, a second coup in eight months, Lieutenant-Colonel Paul-Henri Sandaogo Damiba having been dismissed from his functions by soldiers. The latter, who came to power in a putsch at the end of January, is paying for his failure to curb terrorist violence. The situation remains volatile: the putschists accused, this Saturday in a televised speech, the former strongman of Burkina Faso of "planning a counter-offensive" from the French base of Kamboisin. The French Foreign Ministry "formally denies any involvement in the events underway since yesterday in Burkina", he said in a press release. "The camp where our French forces are located has never hosted Paul-Henri Sandaogo Damiba, nor has our embassy."

Adding the two putsches in Mali and the one in Guinea, this is the fifth coup in West Africa since 2020.

After a day peppered with shooting in the district of the presidency in Ouagadougou, about fifteen soldiers in fatigues and for some hooded spoke, shortly before 8 p.m., on the set of national radio and television. "Lieutenant-Colonel Damiba is removed from his position as president of the Patriotic Movement for Safeguarding and Restoration" (MPSR, the ruling body of the junta), the soldiers said in a statement read by a captain.

The new strong man of the country, appointed president of the MPSR, is now captain Ibrahim Traoré. This 34-year-old man was until now the head of the anti-jihadist special forces unit "Cobra", created in 2019, in the Kaya region (north).

"President Damiba could not solve the country's security problem, but that was why he had taken power. He found himself in an impasse", explains to L'Express Thierry Vircoulon, researcher at IFRI . To justify their coup, the putschists invoked "the continuous deterioration of the security situation" in the country, while Paul-Henri Damiba had promised to raise the issue of security to the top of his priorities.

Eight months later, its balance sheet remains mixed. Deadly attacks, affecting dozens of civilians and soldiers, have multiplied in the north and east, where cities are now subject to a blockade by jihadists, who are blowing up bridges with dynamite. Djibo, a city in the north of the country which housed one of the largest cattle markets in the region, has been besieged for seven months by armed Islamist groups.

The jihadists also attack supply convoys, two were targeted in September, each time with a heavy toll. Thirty-five civilians, including many children, died in an improvised device explosion on September 5. And Monday, September 26, eleven soldiers were killed and 50 civilians missing in the attack on their convoy. Symbol of an explosive situation, Lieutenant-Colonel Damiba had dismissed his Minister of Defense to assume this role himself, on September 13. In June, the West African mediator for the country said Burkinabe authorities controlled only 60% of the territory.

On Friday, September 30, government spokesman Lionel Bilgo mentioned "a military crisis" over "claims linked to bonuses". Some units of the gendarmerie, according to Le Faso, "consider themselves ill-equipped to deal with terrorist attacks accordingly". Among them, the Cobra unit which mutinied to demand better living and working conditions.

"There were tensions within the Burkinabe army, which has experienced numerous mutinies in the past," underlines Thierry Vircoulon, referring to the rivalries between the presidential guard and the Cobra special forces unit, originating from the putsch. "Also, President Damiba had appointed relatives to positions of responsibility and the special forces felt marginalized," he adds. Divided and corrupted for a long time, some army units saw it as an opportunity to take up arms.

According to the Mondafrique site, Paul-Henri Damiba and his brothers in arms would today pay the consequences of not having "reviewed the dysfunctions of the army", and no more "improved the conditions of the soldiers who nevertheless expected profound changes with the military in power". Added to this is the increase in the salaries of Burkinabe ministers, while part of the population is threatened by food insecurity, further fueling the anger of the troops.

In a press release, the Economic Community of West African States (ECOWAS) - whose authorities Burkina has been suspended from since the January coup - "condemned in the strongest terms the seizure of power by the force which has just taken place". Saturday, October 1, it was the turn of the President of the Commission of the African Union (AU), the Chadian Moussa Faki Mahamat, to condemn the "unconstitutional change of government" in Burkina Faso.

The European Union, for its part, expressed its "concerns". The same feeling for the United States, which said it was "extremely worried" by the situation in Ouagadougou and which called on its citizens to limit their movements. The coup "endangers the efforts undertaken for several months, in particular on the part of ECOWAS, to supervise the Transition", lamented the head of European diplomacy, Josep Borrell, in a press release.

The putschists promised to convene "immediately the living forces of the Nation" in order to designate a "new president of Faso, civilian or military". In the meantime, the new junta suspended the constitution and dissolved the government and the assembly, without deciding on the timetable for the transition which had been the subject of an agreement with ECOWAS and provided for a return to power of civilians in July 2024. Several major axes of Ouagadougou, the capital of Burkina Faso, were blocked Saturday noon by soldiers. The fate of Paul-Henri Sandaogo Damiba remained unknown on Friday evening, said AFP.

"The new captains inherit an MPSR ship and a Burkina of burdens and anguish. We have to move wide to face the danger: the loss of portions of the national territory, the deaths and the continuous suffering of the populations", wrote, Friday, September 30, the online media Le Faso. Specialist Thierry Vircoulon speaks of a Burkina Faso in "free fall", while warning: "if the Cobras monopolize power in military circles, there will be another putsch."