Attack on Salman Rushdie: his attacker pleads "not guilty" to attempted murder

"This was a targeted, unprovoked and premeditated attack on Mr. 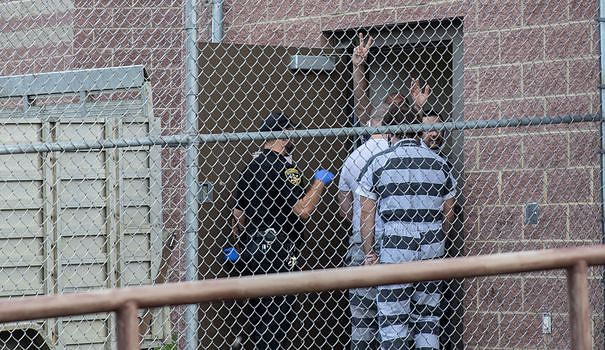 "This was a targeted, unprovoked and premeditated attack on Mr. Rushdie." The words of Chautauqua County District Attorney Jason Schmidt leave no room for doubt. The attack on Friday, August 12, Salman Rushdie - who, on Sunday, "is no longer on life support" and is "on the road to recovery", according to his agent Andrew Wylie - is the result of a project carefully thought out by a displayed admirer of Ayatollah Khomeini, the supreme leader of the Iranian revolution, who in 1989 had launched a fatwa against the British writer. The court therefore decided, on Saturday August 13, to indict Hadi Matar for "assault and attempted murder", without any bail being able to be paid to release him.

The elements known to date indeed tend to show the fatal determination of this 24-year-old man of American nationality and living in New Jersey, but originating from the Shiite community of Lebanon. In particular, he obtained, under a false identity and in advance, a pass to attend the public event where Salman Rushdie was to intervene. The study of his social networks has revealed the religious fanaticism in which Hadi Matar lives.

On his Facebook profile, now deleted, were visible photos of major figures of the Iranian regime, including that of General Solemani, assassinated by American forces in January 2020. According to the New York Times, he also had a fake driver's license in the name of Hassan Mughniyah, an undisguised reference to the surname of a former leader of the Lebanese branch of Hezbollah, assassinated in 2008 by Israel. Despite the damning charges, Matar's lawyer said his client, who will appear again on August 19, has pleaded "not guilty".

Iran, after three days of silence, on Monday August 15 "categorically" denied any involvement in the attack on Salman Rushdie, blaming the author of The Satanic Verses. "We categorically deny" any link between the aggressor and Iran, and "no one has the right to accuse the Islamic Republic of Iran", said Nasser Kanani, spokesman for the Ministry of Foreign Affairs, in his weekly press conference.

This is Tehran's first official reaction to the aggression. "In this attack, only Salman Rushdie and his supporters deserve to be blamed and even condemned," said the Iranian spokesman during his weekly press conference in Tehran.

It must be said that in the eyes of ultraconservative Muslims, he does not have to feel guilty. Quite the contrary. The Iranian daily Kayhan, whose editorial line is established by the Supreme Leader himself, wished to salute a "courageous man who is conscious of his duty", before calling on readers to "kiss the hand of the one who tore the neck of the enemy of God". Officially, Tehran, which announced in 1998 that it would give up fulfilling the fatwa, did not react to this attack.

In Pakistan, the rigorous Tehreek-e-Labbaik party felt that Rushdie deserved to be killed. In an inverse ideological logic, the giant Amazon has reported a drastic increase in orders for Rushdie's novel, The Satanic Verses, in the United States.