"A real danger for civilians": in Ukraine, the delicate mine clearance operation 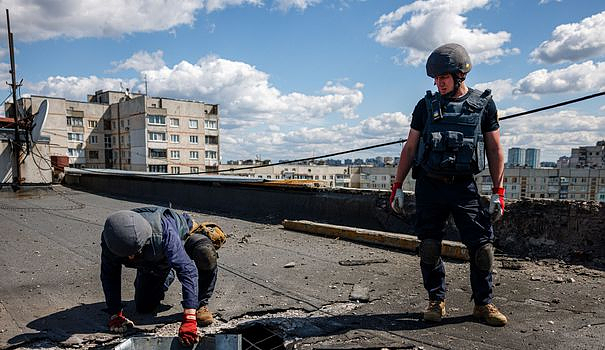 It's everywhere. In the ground, of course, but also in places where food is stored, in car trunks, in hospital rooms, and even under the corpses of war victims. In the localities that Russia has occupied since the start of the invasion on February 24, the Ukrainians find all ranges of mines: anti-tank, anti-vehicle and anti-personnel. This Tuesday, August 9, the United States has therefore announced that it will allocate an envelope of 89 billion dollars so that specialists are sent on site to clean up the soil. There are already some, but the scale of the work is such that the Ukrainian deminers are no longer enough. Last May, on the Euronews channel, one of them confided: "The work is titanic, it will take 50 years to clean everything up". For Galia Ackerman, a specialist in post-Soviet Russia, Russia's objective is clear: "If the Russian army mines as much as it can the territories it is leaving, it is so that the Ukrainians cannot return 'install there'. In Boutcha, for example, the Russians laid mines in front of the gates of houses, causing the death of hundreds of people. A practice contrary to the laws of war, observed in particular among the fighters of the Islamic State in Syria.

To thwart the Russian plan, Ukraine's Mine Action Information Management System is working with the Geneva-based International Center for Humanitarian Demining to map threat areas and determine possible actions. Thus, since the beginning of the war, more than 80,000 explosive devices have been defused. A still minimal share, when kyiv estimates that half of the country is mined. Not to mention dropped weapons that do not immediately explode, which, according to the Explosive Ordnance Risk Education Advisory Group, accounts for 10-30% of explosive weapons used. However, the financial aid will be paid to NGOs and specialized private companies, and not to the Ukrainian government, as aid from Washington usually is. "You have to keep in mind that the Ukrainians have also laid a lot of mines," said Galia Ackerman. "They serve to prevent the Russians from returning, but pose an equally real danger to civilians."

A US State Department official, however, relied on a report by the NGO Rights Watch to tell the press that Ukraine seemed to be "respecting its obligations" in terms of the use of mines, which is a signatory to the international treaty banning anti-personnel mines. "In fact, the deminers paid by Washington will work together with the Ukrainian authorities," said the founder of the Desk Russia site. As proof, the demining operation does not concern sea mines, the latter being largely deposited by the Ukrainians in order to avoid any Russian landing on the coast of Odessa. Signs installed by the municipality are also a reminder that the beaches of this city, once a seaside resort, have changed their role, and that instead of relaxing its inhabitants, they now serve to defend them.

To best protect civilians, nothing beats raising awareness. The solidarity organization Handicap International offers residents risk education, in order to identify suspicious areas based on increased attention to the colors and shapes of the ground. “As many people are starting to return home, they will inevitably find traps,” explains Céline Cheng, specialist in explosive device risk education, on the Handicap International website. Also, she wants to warn people against personal initiatives, to avoid seeing "videos of civilians removing mines from the road to deposit them in the forest". A very risky behavior, even if the Ukrainians know these weapons well, they who live permanently on vestiges of explosives dating from the First and Second World Wars.