Why Is There So Much Art Showing Dogs Playing Poker? The world of art can sometimes be a wonderfully wacky and genuinely bizarre place. Yet, of all the inspiring masterpieces and different genres developed and honed over time, perhaps none have been more captivating or iconic than that of dogs playing poker.

Dogs have always been a daily part of human life. So it is no surprise that they would eventually play a key role in art. It could be legitimately debated that no other painting in all of modern pop culture is more idolized or renowned than that of these famous canine paintings.

Not only did the series of paintings take the world by storm, but soon after, the beloved paintings would be depicted and recreated time and time again. It helps prove that the image is now and forever a part of our world and our collective subconscious.

The very first of these now-famous paintings were produced in the United States by American artist Cassius Marcellus Coolidge in 1894. It's believed that the inspiration for this came from an 1840 painting by Sir Edwin Landseer, titled "Trial by Jury", which portrays a ground of dogs holding court.

This innovative and novel concept of dogs acting like humans introduced a humorous and satirical element into art that gathered appeal from the "common" person on the street and would soon attract the attention of a wider audience not usually that interested in art.

The success of Cassius's painting would lead to a whole series on the genre, with a total of over twenty paintings being produced in just a couple of years. Other paintings of anthropomorphic dogs in different comical scenarios soon followed and would quickly become a staple on the walls of many homes in America and beyond. 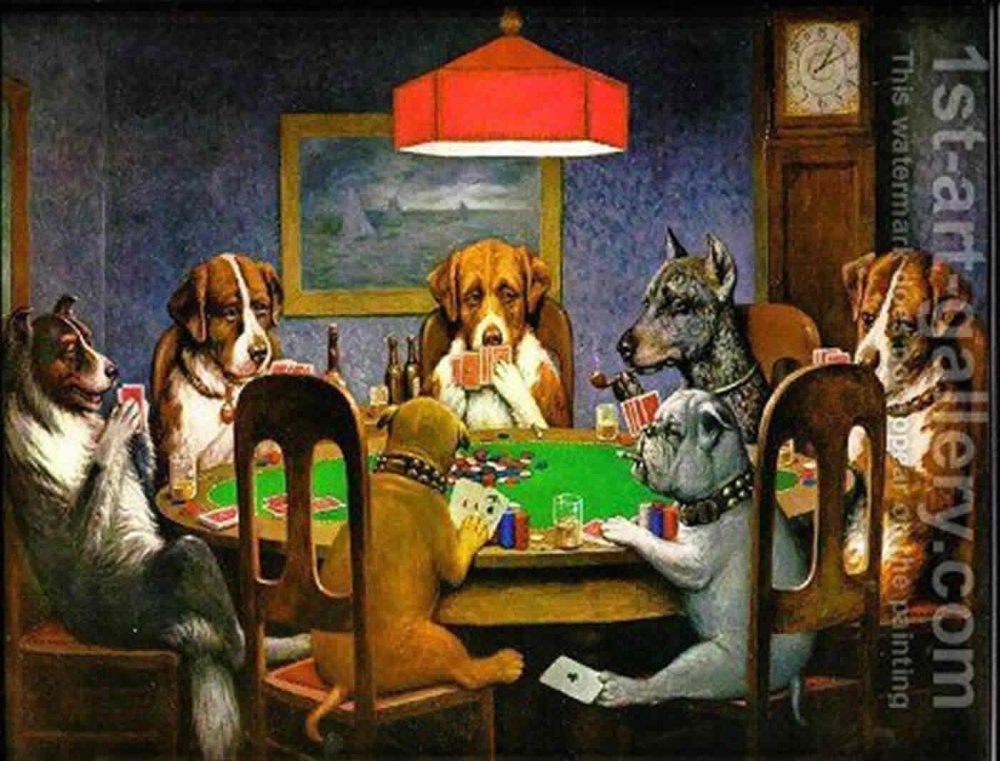 The painting, known simply as "The Poker Game", was the initial trailblazer of the series to follow. It was painted by a little-known artist known as Cassius Coolidge. Coolidge had received no formal training as an artist and had only worked as a cartoon creator up until this point.

This famous art with dogs depicts four St. Bernard shepherd dogs engaging in a poker game while enjoying some cigars and whiskey. The scene is unbelievably cute and comical, and you can't help but smile while looking at it.

It appears that one of the dogs is about to win, but the competition looks pretty serious. The fourth dog appears to have already been eliminated from the game. And he is just looking on in amusement as the game unfolds.

Soon after the painting was released, it caught the eye of an advertising company named Brown & Bigelow who could see the incredible sales potential within the painting. As a result, Coolidge began working for the company in 1903, and a series of "dogs playing" paintings soon followed.

When the 20th century started, the world of media and advertising really began to take off, especially in the United States of America. During that time, America was quickly becoming the capitalist and commercial capital of the world.

When Brown & Bigelow first saw Coolidge's quirky painting, they saw it as an excellent way to advertise and sell cigarettes and alcohol to the public. So they soon hired and commissioned Coolidge to paint several paintings similar to that of the poker game.

Out of the eighteen paintings he produced for the company, eleven depicted dogs playing poker. The other seven included scenes of dogs reading the mail, dogs playing basketball, dogs dancing, dogs camping, and dogs having car trouble. These paintings also depicted dogs drinking, smoking, and gambling and were a subtle way of selling the products.

A Friend in Need

Of all the dog paintings in the series, perhaps the most famous and iconic is the painting known as "A Friend in Need" Painted in 1903, it shows a lively scene of seven dogs of different breeds having a poker night.

The most famous and beloved thing about this particular piece is that two dogs can be seen cheating. The bulldog in the foreground slyly passes an ace of clubs under the table to his friend next to him while the others give suspicious looks and side glances around the table.

The sheer comedy of this is enough to make anyone laugh and is a cornerstone of Coolidge's work. Satirically showing dogs acting like humans reveals our comical and dubious nature, showing us just how ridiculous human beings can be.

In total, Coolidge created eighteen dogs playing poker paintings for Brown & Bigelow. They are all excellent and different in their regard, and all of them are worth looking at if you get the chance.

Coolidge also produced more dog paintings, this time with the anthropomorphic animals playing pool instead of poker. These paintings also became popular and were equally as iconic, for a time at least.

On another note, just as Coolidge's paintings would go on to inspire hundreds of homages imitations, they were also influenced by great artists such as Caravaggio and Paul Cézanne. They, too, had paintings depicting card game scenes, albeit with human players instead of dogs.

The paintings of dogs playing poker have ultimately left critics divided. While some love them, others have discredited them as rubbish and don't even consider them art. Nevertheless, there is no denying their commercial success and long-lasting legacy.