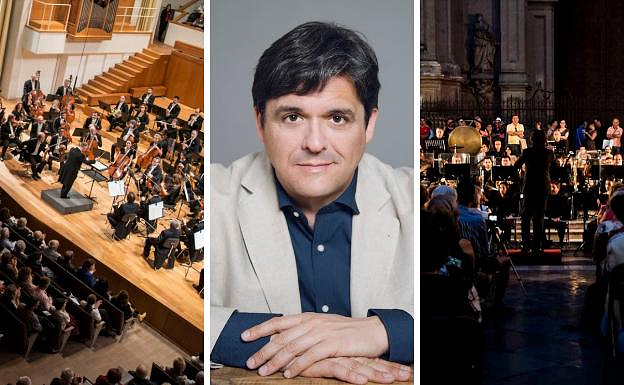 Manuel de Falla was encouraged by Felipe Pedrell and arrived in Paris in 1907. The Cadiz composer was forced to return to Madrid by the Great War in 1914. He spent crucial years in his training. He meets and develops a close relationship with Paul Dukas, his teacher, as well as Claude Debussy, one of the most prominent composers at the time. These three men are inseparable. Debussy composed La Puerta del Vino using a Falla-colored postcard. Both Dukas and the Andalusian singer would write a tribute to Debussy's death in 1918. Falla will also create another tribute to Debussy's death in 1935. Juan Carlos Garvayo, Motril pianist, will perform this intertwining of tributes. This will be expanded with additional works including a revival by MauricioSotelo, contemporary composer most involved creating new musical lines based upon flamenco. Enter the dawn at the Alhambra was premiered last February at Madrid's Reina Sofia Museum. Lorca Center, at 8:20 p.m.

Cantes Antiguos del Flamenco, a new work for viola soloists and orchestra, is the absolute premiere. It was commissioned by Festival to mark the centenary of Cante Jondo Contest. Tabea Zimmermann will be the outstanding soloist, while Lucas Macias will be on the podium. This Festival marks his directorial debut. Tabea Zimmemann will perform the solo in the symphonic premiere. Jean-Guilhen Queyras will play the ingenious Hidalgo cello. The OCG will also include the Young Academy of the OCG.

This program will have a huge appeal because it connects the 20th century with today's time. First, the orchestration by Francisco Guerrero of Linares in the 1990s for El Albaicin, Albeniz's Iberia number, was performed. Then, Mauricio Sotelo's premiere, whose starting place, like so many of its author’s music, is the universe jondo. Finally, the journey concludes with Don Quixote one of Richard Strauss’s greatest symphonic poems. This requires a solo cello in this instance, who will be Frenchman Jean-Guihen Queyras. Palace of Carlos V at 10:30 p.m.

A panel of international experts in inclusive and community dancing shares their experiences and reflections on the barriers and goals of access to training and professionalization for contemporary dance. It is important that this culture contributes to a sustainable, horizontal and diverse, innovative, and sustainable culture.

The band presents A Walk Through Europe under the direction Angel Lopez Carreno. It features symphonic works from Franz Liszt and Amilcare Ponchielli. CORRAL and VARGAS sponsored the performance.

The Gani Mirzo Band was able to take you on a journey through Kurdistan's music. This group is well-known for their research into the fusion between Eastern music and flamenco. It is a heritage to preserve and promote. A show that is full of rhythm and life. This initiative is the continuation of a solidarity project and support for the Duhok camp, Iraq, and Mirzo Music Foundation, Kurdistan. The collaboration of "la Caixa" Foundation. The appointment will take place in the Huerta de San Vicente at 10:00 p.m.

‹ ›
Keywords:
AgendaFestivalGranadaMiercolesJunio
Your comment has been forwarded to the administrator for approval.×
Warning! Will constitute a criminal offense, illegal, threatening, offensive, insulting and swearing, derogatory, defamatory, vulgar, pornographic, indecent, personality rights, damaging or similar nature in the nature of all kinds of financial content, legal, criminal and administrative responsibility for the content of the sender member / members are belong.
Related News