He was 36 years old when he completed his lieder cycle "Die schone Magelone". 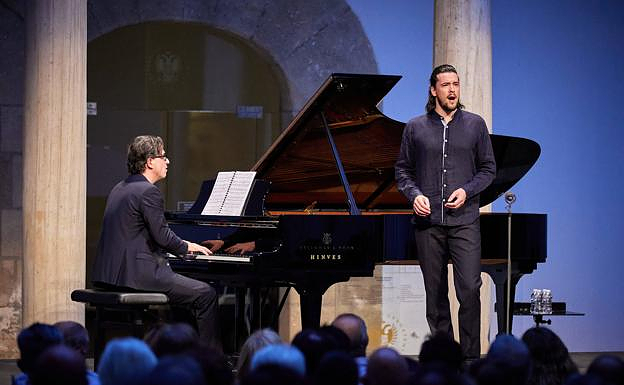 He was 36 years old when he completed his lieder cycle "Die schone Magelone". The image we have of him is one of an older man with a thick beard, a deep mustache, and clear eyes. This is a reflection of his love for Clara. He never married. Many of his works are filled with pure, romantic love. A good example of this was the notebook dedicated Magelone. It contained Johann Ludwig Tieck's poems. We were able, last Wednesday night, to listen to fifteen numbers by the two men.

Already the light was beginning to fade, and the pigeons were slowly settling down behind the Capitals of the Patio de los Marmoles at the Royal Hospital. The extraordinary baritone Andre Schuen, accompanied with pianist Daniel Heide, made sure that no note of this Brahmsian recital was lost by the ring's stony sound and closed border. The duo was young and vibrant, capable of singing and playing for over an hour without having to soak their mouths in water, or dry their sweat, even though it was hot.

Shuden pours it all into his beautiful vocals. Sometimes velvet becomes so soft it almost sounds like a murmur. Other times, it is a momentary fury or descriptive clamor. He gestures with moderation. His arms are at waist height and he holds the other hand with one hand. When describing breezes or dreams, forests, solitudes, and other things, he quietly sways his body.

He sings perfectly for this musical genre. It doesn't need to have long scales or flourishes, as it lacks ups, downs. It is a very intimate genre that involves savoring the text and making the poem unfold between the throats and the mouth. You will be savoring every syllable in the extremely sonorous German language. Festival is still successful because they translate the poems and project the bilingual version between architraves and friezes of the hospital monument.

The pianist Daniel Heide is a perfect combination of romantic expression and scenic containment. He also plays the difficult role of both essential and rearguard. His partner is more theatrical than him, especially in the endings. There's also some betrayal of his pedal to release it earlier. Two men discussing love. The forest and soul are like 15 mirrors. They seem so monothematic that if you didn't know better, it would bore you to death. It is possible to draw differences while maintaining uniformity. The beauty of the dunes is not in the size of its grains of sand.

‹ ›
Keywords:
JovenesCantanViejoBrahms
Your comment has been forwarded to the administrator for approval.×
Warning! Will constitute a criminal offense, illegal, threatening, offensive, insulting and swearing, derogatory, defamatory, vulgar, pornographic, indecent, personality rights, damaging or similar nature in the nature of all kinds of financial content, legal, criminal and administrative responsibility for the content of the sender member / members are belong.
Related News