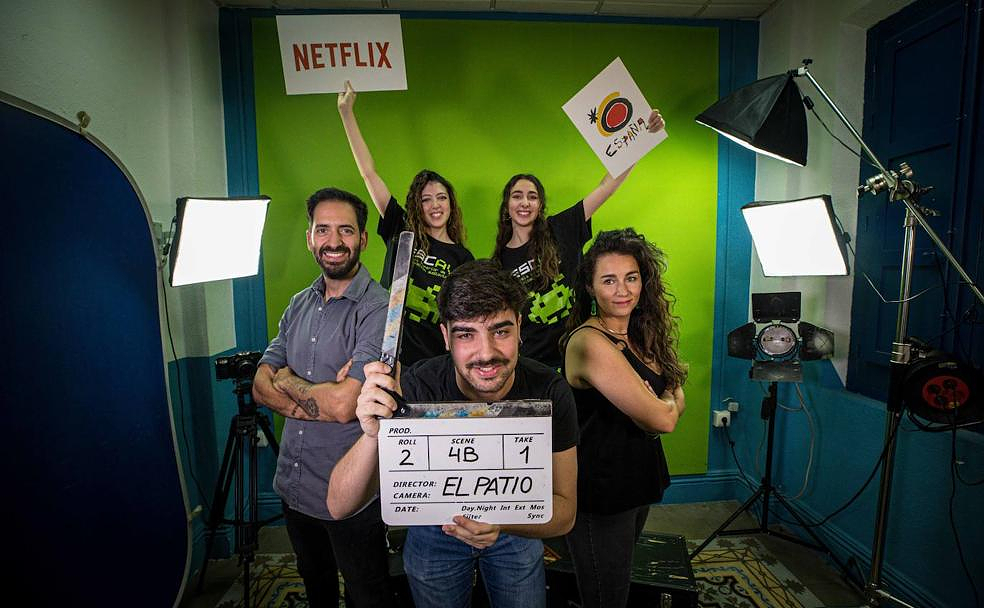 "Tada!" says Mariola. "No, no! It's just like that: tutum!" Luis calls out the final em, and loudly marks it. "Isn’t it more of a tudum Paula giggles, and everyone repeats the onomatopoeia with different intonations, until finally all three do it simultaneously: Tudum !>>. They are approximately twenty-years old and have just completed the First Degree in Filmmaking at Escuela Superior de Cine, Animacion y Videojuegos. The Netflix new talent department just signed them. The three smile with an unnatural smile.

Netflix will release El patio, the first short film of Mariola, Luis, and Paula. It will be shot in September by a team entirely made up of Granadaans and will be available on December 6. What's the story? Why Constitution Day? What did these young men do to get into the Netflix billboard and sneak in? Let's begin at the beginning.

Mariola, Paula, and Luis on the Escav stairs. / PEPE MARIN

Dara Cabrera was the director of Escav when she received an email from Netflix a few months back. All Spanish audiovisual training centers received the same email. "They invited us all to take part in the 'How would Spain be without saying it' contest. She recalls that this was the first short film contest for schools, organized by Netflix and Turespana (the Spanish Tourism Institute). It was a challenge to convey the essence of our country without resorting to clichéd topics. "Behind this project was the Netflix new talent division, which I found interesting because the school is presented but the projects had to been written by students. Jose was also impressed and I sent it.

Jose Cortes, the coordinator of the Realization cycle stood in front of his students one day when there were a gazillion works in progress and deliveries. He explained to them -Cortes continues sitting next to Cabrera in one the classrooms de Escav - why it was important to take part in this contest that only happens once in your lifetime. It was hard, but you had to do it. The young people were divided into three groups and each presented their scripts. We had to send two and El Patio was one of them. "Yours," he says to the teacher as he raises his eyebrows at Luis, Mariola and Paula who are formally seated in the corridor of the classroom.

We went to a tutorial, and suddenly, the list of fifteen finalists was published. We looked at each other, and said, 'no it can't'. But it was, and we were among the fifteen finalists. Mariola Bueno (Granada 2000) knew from childhood that she wanted to be an audiovisual professional. After trying many branches, she finally found her niche: production. In effect, she is the producer of "El patio". The second phase of contest -continues Bueno - was a meeting of directors from Netflix and Turespana, in which we had the opportunity to defend the project. It was a great experience for Susana Casares (director of new talent at Netflix). We were informed that we had been chosen as one of five winners a week later.

The prize money is 7,000 Euros to finance the short film and direct supervision by a Netflix team throughout the process (script analysis meetings; preproduction; filming ...), premiere on Netflix on December 6). The director of this project, Paula Coronado (Cordoba 2004), will play a central role. "Art has always been a passion of mine. I completed the Baccalaureate in Performing Arts. I love to interpret. My cousin and I spent a lot of time as children doing shows for our parents. Last year, however, I was able to discover the world behind the camera. I'm passionate about it. She jokingly says that I can always remember my first movie being on Netflix.

Coronado had the idea to tell a story in Cordoba. But Luis Medina (Mengibar 2000), is the author of the script. Paula convinced us that Cordoba is the right place. I took advantage of Fiesta de los Patios in May and wrote the story about a boy who travels every year from Madrid to Cordoba. He falls in love with a girl there and each year he returns, he wonders the exact same thing: Will the girl from the playground still be there? At the end "Shut up! "Shut up!" interrupts director of Escav. This causes a general laughter.

After seeing 'Memento and 'Little Miss Sunshine,' Medina was inspired to write cinema. But, the truth is that he has seen a little of each. He finished his Audiovisual Communication degree last year in Malaga. But the pandemic destroyed his experience. "In the third and fourth year, which were the most practical years, covid caught us so we hardly touched our camera," says the Jaen- man. To do more practical things, that's why I joined the Escav. I'm very happy. Medina wants to make movies and write stories. He also wants people to be able to identify his style. "Have your own seal."

Cabrera is proud to say that Luis already has the stamp. It's a gift to be able to make you laugh and cry in just three pages. It's a gift. Three pages, because "El patio" will only last three minutes. Netflix's first three minutes with Luis, Paula, and Mariola. They and the whole team that will be formed over the next months. Escav's teachers supervise a 100% Granada team.

Luis, Mariola, and Paula in one of the Escav classes. / P. MARIN

It will be a busy summer. Next week, they will meet for the first time to refine the script. Then work will begin on organizing a team and locating the protagonists. Mariola smiles at her friends as she thinks about the future. In class, we come together as a larger team and each member dedicates himself to a specific task. My dream is to make them. He sighs, but I'm not sure. Who would have thought they would finish Realization in the classroom and start it on Netflix? >.

‹ ›
Keywords:
TresAlumnosGranadaEstrenaranPrimerCortoNetflix
Your comment has been forwarded to the administrator for approval.×
Warning! Will constitute a criminal offense, illegal, threatening, offensive, insulting and swearing, derogatory, defamatory, vulgar, pornographic, indecent, personality rights, damaging or similar nature in the nature of all kinds of financial content, legal, criminal and administrative responsibility for the content of the sender member / members are belong.
Related News