Three days in a row, Almeria is declared the capital of the urban style

Almeria has thousands of residents who already embrace the urban culture. 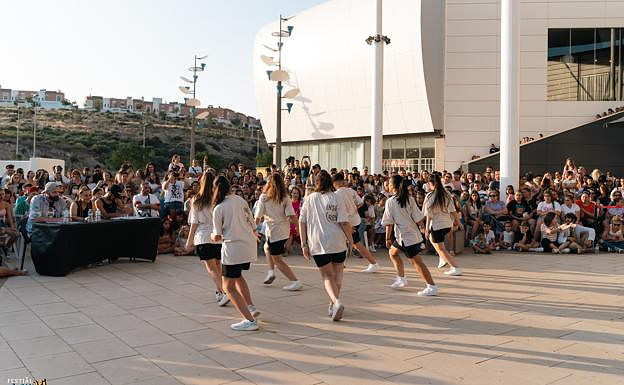 Almeria has thousands of residents who already embrace the urban culture. This is important to note, as it was not too long ago and still remains a lifestyle that was associated with crime and drugs. Public-facing jobs were prohibited from allowing tattoos or piercings. Many people still find it difficult to accept them, especially if they have lived their whole lives seeing how society rejects them.

It is common to see bankers with tattoos on their necks and arms in other European countries. This is something we can't imagine here. We are still moving forward in this way. This is due to events like the Urban Lei Festival which bring the urban world into the public spaces in Almeria. This year's edition of the festival, which began July 7, has seen a great deal of participation. There are still many activities that can be found in Almeria's Torrecardenas Shopping Center, and in the middle of the city.

The first is the Piercing

Graffiti Street Art will also be an organized activity on the Amatisteros boulevard in front of IES Alhamilla. It will allow you to see the application of spray, the expression, and the color in the center of the city. This will all be done by Irene Lopez Leon (whose work is titled 'To thrive, you must take root'). The piece will be displayed together with a plaque with descriptive text that will give the city an artistic symbol.

The I Barber Challenge, which will take place on Avenida Garcia Lorca near Burger King at 8:00 pm, will be one of the highlights. The contest will see 16 barbers from the province compete to show their artistic skills and use of the razor, machine, and scissors in a maximum of 45 minutes. They will also be using a model they choose.

A jury of three prominent barbershop professionals, Dani Rull and Francis de la Calle, will determine the best hair stylist. Prizes will be awarded to the winners. Three prizes will be given, including a trophy and a gift package with tools and other products that are typical of their profession. Exclusive Leyfer is the official collaborator in this activity.

This Saturday, the Skate at Torrecardenas Shopping Center will be closed at 8:00 pm. This great skate exhibition will take place on the exterior of the shopping center. It will feature professional skaters Manolo Robertles, Nahuel Cesar and Chanchy, as well as two longboard experts, Raluca Alonso and Nito Alonso. Participants will be encouraged to use their own boards after the event from 9:00 p.m. until 10:00 p.m.

Activities from the past

These activities are the culmination three days of urban focus. On Sunday, you will still have access to the climbing wall, which has been in place since Torrecardenas' first installation. Access requires that you apply for the shopping center. However, there have been other noteworthy activities that were free to participate in. The Torrecardenas Shopping Center hosted the Microwalkway (Friday) and Urban Lei Walkway (Friday). These were organised by Navarro Pasarela. Children from Asalsido, ONCE, and other children participated in the micro catwalk. It was characterized by an inclusive spirit. Urban Lei was accompanied by MaaCharly, an urban artist. Paraded models wearing clothing from Primark, Mayoral, and Sfera. Filmanas accessories, and fans were designed and painted by Alejandra Castillejo.

Also, the Battle of Gallos Urban was created. The Battle of Gallos Urban was a series of improvised hip-hop concerts where participants had to compete with each other using their best rhymes in accordance with the theme. The Rambla Amphitheater hosted DJ Fixi, who set the pace, and Mister Ego and Said El Ekipo performing. There were 32 participants in the battle and the jury included Klone, Sheriff Master, and Mister Ego.

The Shopping Center hosted the Hip Hop Dance Contest's 1st Edition on Thursday. The contestants were divided into age groups and showed off their choreography, repertoire, and costumes to the audience. The contest's judges were Ursula Rilo and Benje Ramos, as well as Morales. The Musical Production workshop, which had been held since Monday, was also completed that day.

Tomorrow, Sunday was the Urban Lei Festival's farewell. A concert was planned at the Almeria Fairgrounds, in which Trueno and Beny JR, the renowned Argentine artists, would perform. This concert was rescheduled for September 23. The Plaza de Toros de Almeria will host the event.

Almeria's Urban Lei Festival proved that there is a place for urban music and that it will develop in the coming years. Many talented young people will be able to showcase their talents to the public thanks to this.

‹ ›
Keywords:
AlmeriaTransformaCapitalGeneroUrbanoTresDias
Your comment has been forwarded to the administrator for approval.×
Warning! Will constitute a criminal offense, illegal, threatening, offensive, insulting and swearing, derogatory, defamatory, vulgar, pornographic, indecent, personality rights, damaging or similar nature in the nature of all kinds of financial content, legal, criminal and administrative responsibility for the content of the sender member / members are belong.
Related News