This afternoon, the 'ConTempo" exhibition was opened. 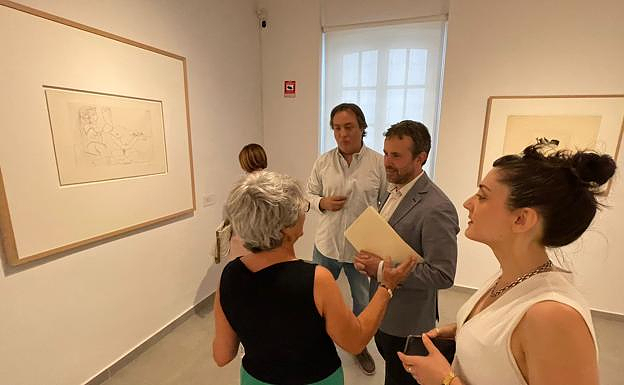 This afternoon, the 'ConTempo" exhibition was opened. It features the Municipal Contemporary Art Fund of the City Council, which includes graphic work by Picasso and Manuel Angeles Ortiz as well as Miro, Miro, and Chillida. The unprecedented exhibition will be on view until February 10, 2023 at the Banos del Naranjo's new exhibition hall. This has made Jaen a central location for culture and history.

The hours of operation are from Thursday through Sunday from 11:00 a.m. until 2:00 p.m. Saturday openings will also be possible from 5:00 p.m. until 7:00 p.m. The Consistory created the new space to host long-term art exhibitions. It also has figures of artistic relevance that enhance the attractiveness of the tourist infrastructure of the old town.

"After the restoration of this building with funds from Spain, it has opted in this municipal stage to give life to Banos del Naranjo" stated Julio Millan, the mayor. Jose Manuel Higueras, the Councilor for Culture, was also present during the event.

The Contemporary Art Hall's opening exhibition is 'ConTempo'. It reveals to Jaen residents, visitors and the public a selection from the municipal collection, along with four works donated by Manuel Angeles Ortiz, and Picasso's engraving. These works were acquired by Jaen City Council in 1981 through popular subscription, at Pilar Palazon's initiative. This exhibition places us in the moment of birth of Jaen's Municipal Contemporary Art Fund, during the first democratic City Council of Jaen. It's an exciting moment in culture. The exhibition offers an open reading.

Its origin dates back to the 1980s. From 1981 to 1984, there was an active golden period in which the city hosted exhibitions, catalogues were published, and the municipal culture was linked to other entities. Jaen was part the peak of contemporary art being created in the Spanish Transition.

It was a moment at which all local artists joined together and became part of the city's art history. This is the moment of Homage Picasso, the exhibition at Jaen Museum. It also marks the purchase by popular subscription of an engraving from Picasso after the exhibition of his works in Jabalcuz Art Gallery.

Manuel Angeles Ortiz is also named the favorite son. The City's Gold Medal is awarded to the artist of the Generation of 27. In addition, the City purchases graphic art with portfolios of pertinent artists like Miro, Chillida or Juan Genoves. These portfolios can be used to purchase graphic art.

Temporarily also, works that are in the Jaen Museum's custody and municipally owned can be recovered. These include the two oil paintings from Manuel Angeles Ortiz's 'Heads" series and an engraving by Picasso.

The Culture Board took advantage of this opportunity to clean, air, and reframe these works so they could be rediscovered with a new vision by the public.

Four scores dedicated to Pablo Ruiz Picasso are included in the exhibition. They were composed by Cristobal Halffter (Fernico Mompou), Federico Mompou (Luis de Pablo) and Xavier Montsalvatge. A text by Jorge Guillen is included in this tribute to Picasso. The exhibition concludes with a showcase that includes publications, documents, and photographs from the Municipal Archives, as well as others donated by the Jabalcuz Art Gallery heirs.

The Culture Board will host a series of parallel events during ConTempo's seven-month stay. These will include talks and conferences about the Generation of 27 and Jaen, Manuel Angeles Ortiz’s relationship to Litoral magazine, flamenco through recitals, and the cultural interpretation of the scores displayed in the room.

‹ ›
Keywords:
AyuntamientoAbrePúblicoPrimeraFondoMunicipalArteContemporaneo
Your comment has been forwarded to the administrator for approval.×
Warning! Will constitute a criminal offense, illegal, threatening, offensive, insulting and swearing, derogatory, defamatory, vulgar, pornographic, indecent, personality rights, damaging or similar nature in the nature of all kinds of financial content, legal, criminal and administrative responsibility for the content of the sender member / members are belong.
Related News