Maria Pages, a bailaora and choreographer, has been awarded the Medal of Granada International Music and Dance Festival 2022 at the Corral Del Carbon. 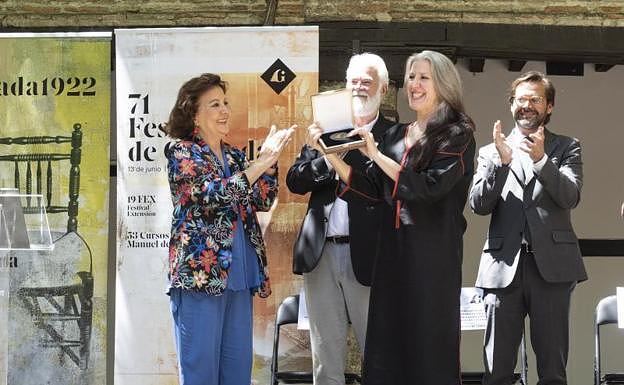 Maria Pages, a bailaora and choreographer, has been awarded the Medal of Granada International Music and Dance Festival 2022 at the Corral Del Carbon. She received this recognition from Carmen Linares, the cantaora Carmen Linares.

The Granada Festival released a press release pointing out that Linares, a close friend of the artist who also shared the 2022 Princess of Asturias Award, had already received the same Medal ten year ago.

On June 2, the Governing Board of the Granada Festival unanimously decided to award two Medals of Honor to Maria Pages, the choreographer and dancer, and Josep Pons, the conductor.

These awards are given to recognize artists' artistic and professional contributions and their close relationships with the Granada Festival. Maria Pages, a Sevillian dancer, was awarded the award "in recognition of his dedication to flamenco dancing and his ability to revive this art through his own creations>>."

Maria Pages (Seville 1963), choreographer and dancer. Her first jobs were with the Antonio Gades Company and as prima ballerina in Mario Maya's company. She started her own company in 1990, producing numerous shows. With this company, she has revived flamenco dance with a mix of tradition and modernity.

She has been performing on stages all over the globe as a choreographer and dancer for more than 30 year. She premiered Ode to the Orange Blossom at the Salzburg Festival on June 5. She established her Choreographic Centre in Fuenlabrada in 2018, where she is active in flamenco dance and art defense. In 2002, she was awarded the National Dance Award, the Gold Medal for Merit in Fine Arts in 2014. She also received the Princess of Asturias Award for the Arts in the year 2022.

On the centenary year of Federico Garcia Lorca's birth, his first performance at Festival was 1998 with De la luna al viento. His creations have shaped the history of the Granada Festival. He has been involved in seven editions. She was a dance advisor in the Artistic Commission (1997-1999) and has taught master classes in Manuel de Falla courses.

His art has demonstrated that flamenco is an Intangible Heritage of Humanity. It can evolve to dialogue with all languages, poetry, literature and music. The myth of the women. The Teatro del Generalife presents 'De Scheherazade' on Tuesday, June 28.

‹ ›
Keywords:
MariaPagesRecogeMedallaFestivalInternacionalMúsicaDanza2022
Your comment has been forwarded to the administrator for approval.×
Warning! Will constitute a criminal offense, illegal, threatening, offensive, insulting and swearing, derogatory, defamatory, vulgar, pornographic, indecent, personality rights, damaging or similar nature in the nature of all kinds of financial content, legal, criminal and administrative responsibility for the content of the sender member / members are belong.
Related News