A soloist can find the Patio de los Arrayanes stage overwhelming, even if it is small enough. 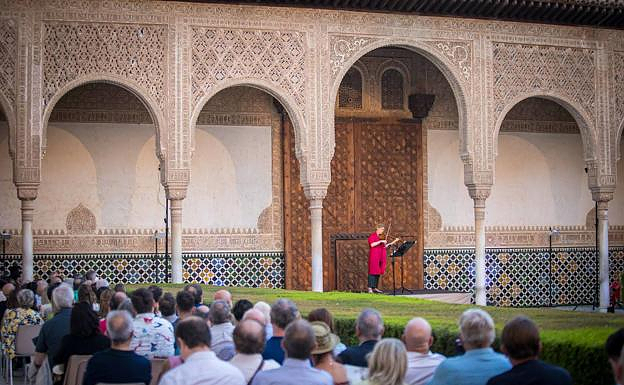 A soloist can find the Patio de los Arrayanes stage overwhelming, even if it is small enough. To be able to perform a solo recital in this setting, you must have great presence and self-confidence. Even more so, if the instrument is small enough to fit in your hands without the assistance of a piano. It is a difficult task that only the greatest can meet with assurances. Isabelle Faust, last night, a very elegant woman in black and fuchsia, can be called a great performer. Definitely. Her career supports her. She is only half-century old and has been performing arpeggios for groups like the Boston Symphony, NHK in Tokyo, the Berlin Philharmonic, and the Boston Symphony. She has been next to Sir John Eliot Gardiner (we are still waiting for him), Bernard Haitink and Daniel Harding as well as Herreweghe, among many other important names. She gave a remarkable concert in Granada last year with Roth and Gurzenich. She promised her that she would perform the concert she gave yesterday in the Patio de la Alberca.

His knowledge of the works was also a benefit. It was actually true that 'Sonata number three', which is number 1005 in the Bachian catalog, was recorded in 2010 by Harmonia Mundi. Number 2, catalogue number 1003, has been performed many times. The concert last night was a tribute to Bach's groundbreaking concept of musical composition. It featured those leaps between dissonances and consonances that present a challenge to a performer but also enrich the ear. Bach is a familiar name to many, and it's not uncommon for them to refer to him as a canon and a recognizable genius. This should be acknowledged and cited with respect.

The middle is a work that pays homage to the pater' of essential music. It was identified by the initials JSB (1926) by Gyorgy Kurtag, a contemporary Hungarian composer. He aims to unify tradition and his own interpretation. This work is ultimately a reinterpretation, but not all, of the musical ancestors. As we saw last night, Kurtag's is original and it is.

Faust began confidently with the introductory "Grave" of Bach's 1003. Overall, Faust delivered an outstanding performance. Some audience members applauded before the time was up. The best moment of the evening was, however, the very grateful Allegro'. Kurtag's work, on the contrary, is a constant game of hints that almost requires the listener to fill the gaps. It can be whispery at times and rapt at others. In a sort of sound rollercoaster, small works can excite and calm.

The bridge to Bach's 1005 was perfect. Its almost obsessive opening, 'Adagio,' with a return at the beginning point that seems endless, sounded surprising contemporary. "Fuga" honored his creative genius. "Largo" was spoilt by an inexplicable and stubborn plane. "Allegro assai", almost, made up for it with a magical performance. The German also gave us more Bach and delicious bits of the German author as a tip.

‹ ›
Keywords:
TempraneroRecitalIsabelleFaustRindePúblicoGenioBach
Your comment has been forwarded to the administrator for approval.×
Warning! Will constitute a criminal offense, illegal, threatening, offensive, insulting and swearing, derogatory, defamatory, vulgar, pornographic, indecent, personality rights, damaging or similar nature in the nature of all kinds of financial content, legal, criminal and administrative responsibility for the content of the sender member / members are belong.
Related News