Courtyard of the Marbles (H. 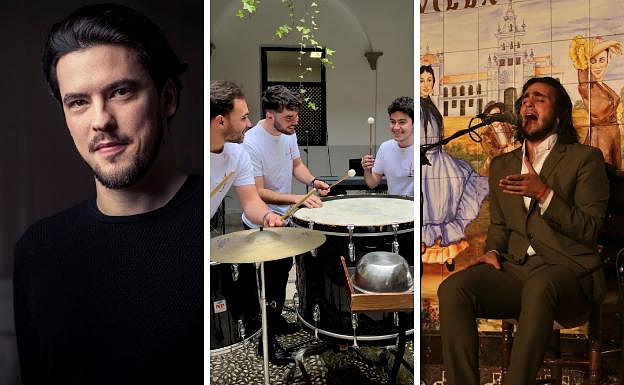 Courtyard of the Marbles (H. Real)

This extraordinary cycle of songs, which was the first to be written by Brahms, is included in the Festival's tribute to him on the 125th anniversary. The young German baritone Andre Schuen will be facing these 15 ballads. These were written by Brahms about the poems of Ludwig Tieck for Julius Stockhausen (a well-known disciple of Manuel Garcia) between 1861-1869. Romanzas These are what Brahms calls them. However, the term must be interpreted to mean 'ballads'. This refers to songs of a narrative nature that build the medieval legend about courtly love between Pierre, the son of the Count de Provence, and the beautiful Neapolitan princess Maguelone. They will be accompanied by Daniel Heide, his regular companion. Radio Clasica (RNE) and the European Broadcasting Union will broadcast the concert live. Patio de los Marmoles, 9:30 p.m.

Palace of the Cordova

Jose del Tomate is a new Almeria player. He uses the stage name of Jose Fernandez Torres "Tomatito", his father and teacher. His great-grandfather is an ancient tocaora dynasty. This has made Almeria a reference point in root flamenco guitarist, especially Camaron who chose Tomatito to be his forever companion. Although the Tomatito school is a cult, it has only one heir who can truly express artistic merits. Jose del Tomate. The young guitarist is able to bring the musical legacy of his father into the modern age with his fresh sound approach. He has been a major player in the current world of guitar playing since he published Plaza Vieja, his first piece with Universal Music. Concert sponsored by El Jardin de Hammam. Co-production with the Andalusian Agency for Cultural Institutions. Andalusian Institute of Flamenco. Palacio de los Cordova, 10:30 p.m.

The Cuarto Real de Santo Domingo will host a special concert by Whip PerQuartet, a young group of percussionists. They bring their passion for percussion to the stage with an innovative and progressive approach. They create music that explores the sounds of metal, wood, and other instruments, and objects.

Whip PerQuartet was created in the "Victoria Eugenia Royal Conservatory of Music" in 2021. The Chamber Music subject that began was turned into a professional percussion quartet training. Recently, the Third Prize in the RCSMVE Chamber Music Contest was awarded to the trio. Red Electrica de Espana sponsors the concert.

Corral del Carbon will host Flamenco at 9:30pm. Ismael De la Rosa El Bola>> is the cante player and Yerai Cortes plays guitar. Ismael's Cante is made from the finest Triana tradition. It continues a family tradition that has seen many successful artistic careers and well-known personalities. They offer a recital with Yerai Cortes on guitar, his faithful companion. AIEnRUTaFlamencos collaborated.

‹ ›
Keywords:
AgendaFestivalGranadaMiercolesJulio
Your comment has been forwarded to the administrator for approval.×
Warning! Will constitute a criminal offense, illegal, threatening, offensive, insulting and swearing, derogatory, defamatory, vulgar, pornographic, indecent, personality rights, damaging or similar nature in the nature of all kinds of financial content, legal, criminal and administrative responsibility for the content of the sender member / members are belong.
Related News