These times are not the same as ever, nor is Duquende camaron de la Isla. 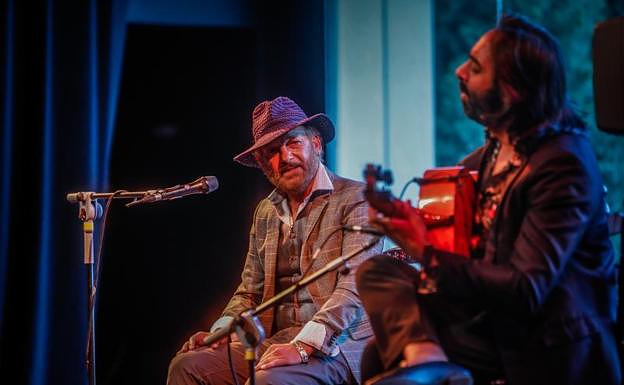 These times are not the same as ever, nor is Duquende camaron de la Isla. Juan Rafael Cortes Santiago (known as Duquende) left La Chumbera on Saturday in poor manners at the Granada Music and Dance Festival. It was half-time. He was already late for sound checks, and he blamed the organization for not being able to access Sacromonte. After he had finished sounding, the negative mood started to rise. He couldn't find the right sound and gave the technicians a black pass for his excellent work since the Festival began.

After a five minute courtesy, everything was set and the concert began with a rondena lead by Carlos de la Jacoba from Granada, the guitarist. He appeared fifteen minutes after the lights went off, his face long and his body full of urgency. He was actually unable to sing any of the songs he attempted to give to the public. They were marked by an inexplicable rush. He left the French player to face the storm, not greeting anyone respectable and without saying goodbye.

The game was discovered later: Duquende appeared in the poster for a festival organized by the Diputacion de Malaga. It began in the nearby city at 9:30 pm. The Catalan singer had made a promise to attend the meeting before 11:00 p.m., when he calculated that it would be announced and that he would perform. This was two birds with one stone. He threw in the towel and fled with his tail between his legs, leaving poor Carlos de la Jacoba to apologize to the public. They promise that they will refund the ticket amount to all attendees.

Sources at the Festival have voiced their disgust at the nonsense of someone calling himself an artist and breaking his contractual obligations. He disrespected first of all those who came to see him and secondly at one the most prestigious events of the country, the Music and Dance Festival with 71 years of existence and third to the city, Granada. La Plateria members, on the other hand, recall that they had done something similar in La Pena a few years back. They comment on the board, "He is a poor professional and I don't think we will take him anymore."

This gentleman's ethics, however, is a discrediting of flamenco. It goes back many decades and calls into question hundreds of honest artists who work every day to make their art dignified.

‹ ›
Keywords:
DuquendeAbandonaMedioRecitalDesprestigiaFlamenco
Your comment has been forwarded to the administrator for approval.×
Warning! Will constitute a criminal offense, illegal, threatening, offensive, insulting and swearing, derogatory, defamatory, vulgar, pornographic, indecent, personality rights, damaging or similar nature in the nature of all kinds of financial content, legal, criminal and administrative responsibility for the content of the sender member / members are belong.
Related News