"We are confident", explains the Minister of National Education, after reviewing his troops. 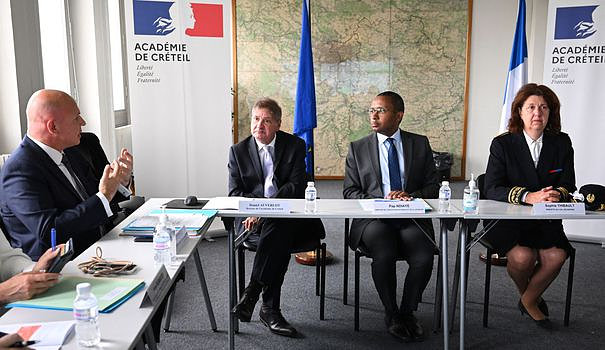 "We are confident", explains the Minister of National Education, after reviewing his troops. This Tuesday, August 23, Pap Ndiaye went to the rectorate of Créteil, in the south-east of Paris. The latter met the members of the back-to-school unit set up to best meet the demands of schools and establishments in terms of staff in this academy, which brings together Seine-Saint-Denis, Val-de-Marne and Seine et Marne. A trip, to calm fears, while a shortage of teachers is looming, nine days before the start of the school year.

From this visit, Pap Ndiaye draws the greatest serenity, while France is going through a shortage of teachers. "There are structural difficulties linked to the attractiveness of the profession, but at this stage we are confident that the start of the new school year will go as well as possible for the students of the Créteil academy, and beyond of course for all territory," he told AFP. A displayed calm, to respond to the fears of teachers and parents of students, while the staff is still missing. For his first return, Pap Ndiaye promises, there will be "a teacher in front of each class".

A challenge, 10 days before the start of the school year. In the Grenoble academy alone, this Tuesday, 773 replacement offers remained to be filled, over periods covering the entire school year for the most part. The sign of the holes left by teachers who have gone into retirement, on leave, or in retraining. This year, more than 4,000 positions were not filled in the teacher competitions, a historically low rate, according to figures from the Ministry of National Education. In the first public degree, the rate of positions filled is 83.1%, against 94.7% last year. For colleges and high schools, it stands at 83.4%, compared to 94.1% in 2021.

These particularly acute recruitment difficulties, particularly linked to a crisis in the attractiveness of the profession, raise fears of numerous absences. In Créteil, the situation is comparable, or even slightly better than last year at the same time", according to Ndiaye. A status quo not really encouraging, when we know that the academy is one of the most affected: "There is difficulties in certain disciplines" of the secondary, in particular for the vocational high schools, and "we are working on it", recognizes the minister.

From year to year, the pool of teachers is reduced. "It is an old problem, but which has worsened in recent years", explained the minister last July. Faced with these recruitment difficulties, the National Education has in particular resorted to the recruitment of contract workers from June during controversial "job-dating", interviews organized in several academies.

Créteil is no exception. Those selected, who must have at least a license - whatever it is - will teach from the start of the school year, often with only a few days of training, offered from this week. "We must respond to this by improving the attractiveness of the teaching profession (...) in the meantime, we are recruiting as best as possible", evokes the minister, together with Daniel Auverlot, the rector of the Academy of Créteil, whose remarks were collected by AFP.

But the situation is far from settled. In the first degree (nursery and elementary schools), serious deficits exist in particular in the Ile-de-France academies, and more particularly in those of Créteil and Versailles. Barely more than 900 candidates were recruited out of 1,665 open positions in Créteil, and no more at Versailles, for 1,600 open positions. In secondary education, certain subjects are of particular concern: several subjects are far from having filled up the competitions, such as German (55% of positions filled compared to 70 to 81% during the three previous years), classics (57 %), physics-chemistry (66.7%) or mathematics (68.5%).

Faced with this insufficient recruitment, ten Nupes deputies from Seine-Saint-Denis also asked the Minister of Education in July for "emergency measures" for the start of the school year, in a popular department with a large population, already penalized by many non-replacement teachers. Cells have thus been set up this week in each academy to "settle difficulties where they arise", answer questions from newly hired contract teachers to remedy staff shortages, and prepare for the start of the school year as well as possible.

"It's still very light. It does not replace a little more substantial training", reports to AFP Sophie Vénétitay, general secretary of Snes-FSU, the first secondary school union, who evokes her "concern, and at the same time a form of annoyance". "It's the return of the shortage," she adds. "We have seen that the rectorates and the ministry are tinkering in every way to be able to display a teacher in front of each class at the start of the school year. But even if this objective is achieved, we can wonder what the price will be, if these are untrained teachers. Stéphane Crochet, of SE-Unsa, another teacher union, fears that "behind the back-to-school display, if we manage to put people in front of the classes, we no longer have any reservations substitutes". What may perhaps risk disconcerting the minister, in the weeks to come.