Z 650 RS, the perennial beauty of the old school Kawasaki in the XXI century

We got on one of the greatest exponents of the neo-retro current of motorcycles. 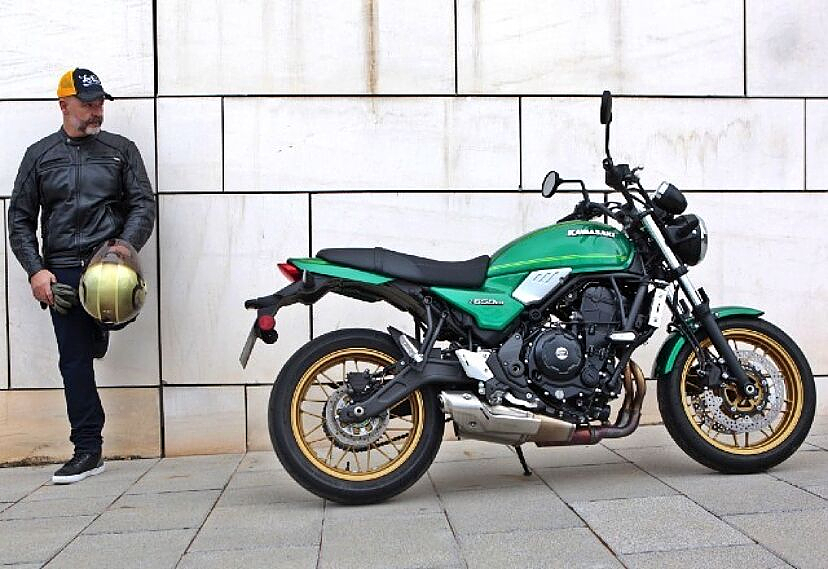 We got on one of the greatest exponents of the neo-retro current of motorcycles. Its price, which does not reach 9,000 euros, also makes it one of the best options on the market.

This Kawasaki Z 650 RS is one of those bikes destined to draw the eyes of passers-by on the street and motorists at traffic lights. Its style, an almost perfect balance between the old school of the brand, drinking directly from the fireball style of that original Z1000 Super Four myth from 1972, and a good selection of the latest generation technology from Akashi's signature, is one of the maximum exponents of what is now called neo-retro, in fact the brand catalogs it as RS, Retro Sport.

With dimensions designed for a perfect ergonomic profile for almost any type of user (2,065 x 800 x 1,115 mm, length, width and maximum height, respectively), its ground clearance of 125 mm together with a seat at 820 mm allows you to comfortably reach down.

Visually, the Z 650 RS stands out for a clean front where its LED optics command and a wide but comfortable handlebar with a straight-cut profile, suggestively finished off by a seat in line with the tank, also retro in style. , all very horizontal and, in this case, because of the green color that simply suits him perfectly. The twin 17-inch wheels seem to have spokes, although they are made of sticks, as many as twenty, and with a gold chromatic finish.

On the go, its four-stroke parallel-twin (DOHC, of ​​course, it's a Z) engine delivers the power (68hp at 8,000rpm) at two levels of grip and revs, so to speak. On the one hand, when starting the march and circulating in the low range of revolutions, this Z 650 RS shows a very linear behavior accompanied by a smooth delivery, all accompanied by the pleasant sound of its tube hidden between the wheels and under the chassis. . As the rev counter progresses, the delivery becomes more direct (its maximum torque of 64 Nm is delivered in 6,700 laps), more intense, uncovering the most radical gene Z... without becoming extreme.

Its wheelbase of 1,405 mm and a curb weight of 187 kg (the trellis-type steel trellis chassis is around 13.5 kg) also make it very agile in curves despite its unsportsmanlike appearance and stance. Driving that does not invite you to give in to the fun a priori because it is very neutral, with well-placed footrests and you have to force the bike to get to rub against them. This circumstance is also highlighted by the good behavior of its 41 mm front telescopic fork that is neither too hard nor too soft, but not the rear one that sins a bit towards the soft side (at least in this unit) which is can be adjusted, although access to the shock absorber is not easy, everything must be said.

The correct braking, neither more nor less than what it needs or perhaps with a front plus, since it mounts two semi-floating 30mm petal discs with a double piston caliper at the front (more than enough) and one, also 220 mm petal rear, with simple piston in this case.

And what happens in the city? Well, the Z 650 RS is like a fish in water in traffic with smooth but resounding turns between cars, with significant ease in the grip when climbing laps at mid-range and with an ergonomic posture perfect for the urban jungle.

Electronics is fair. No help. In the instrument panel, with two analog clocks with tachometer and speedometer and with the basic information (complete, but basic) in digital format on its LCD screen, you will not find either traction control levels (which it does not have), nor selection of power or anything like that... You don't need it, the essence of the model is anti-all this, hence its excellent value for money with a starting price of 8,650 euros (this beautiful green version costs only 150 euros more compared to the black of access, price that it shares with the other special edition in gray and black combined, separate 50th Anniversary edition).

A declared consumption of 4.3 liters per 100 km impossible to meet unless it is rolled at the WMTC pace and conditions, during the mixed test carried out for a week, this consumption did not skyrocket either, hovering around 5.8/6 liters , a very respectable figure considering that on the road it was quite enjoyed, you know what I mean.

This Z 650 RS is, and will undoubtedly be, one of the best options for all those who seek a balance between the nostalgia of the golden years of the 70s, but who do not want to give up the technology of an engine that contrasted, perfect performance for urban day-to-day and weekend getaways and finishes a step above many of its peers in the segment.