In the last quarter, in which the Ibex has fallen by 4. 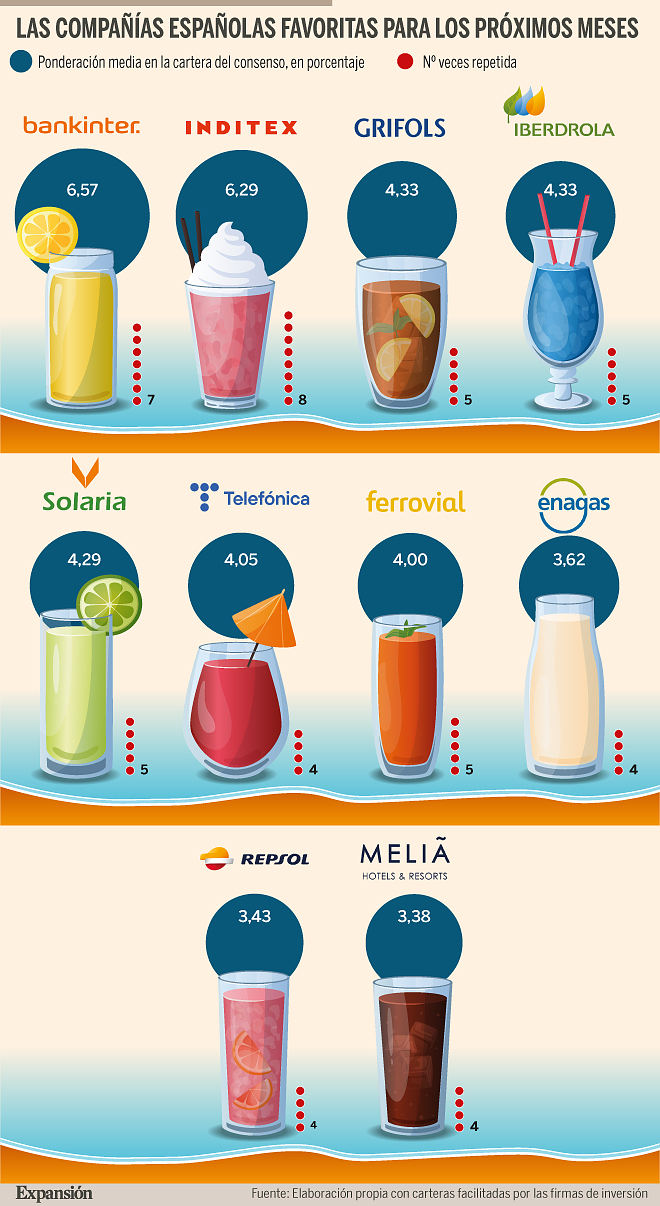 In the last quarter, in which the Ibex has fallen by 4.10%, fourteen of the 21 portfolios participating in the securities portfolio competition organized by EXPANSIÓN have beaten the performance of the Ibex. Three of them have achieved increases of between 7% and 11%. This is the case of the proposals from Mirabaud, Norbolsa and GVC Gaesco Valores. The first two are placed among the firms that achieve the best results in the accumulated of the year.

Mirabaud leads the ranking in 2022 with a gain of 34.43%, which contrasts with the 7.06% drop suffered by the Ibex between January and June. Its commitment to the financial sector in the first part of the year has been decisive, as has the success with some smaller and smaller stocks in the energy sector.

In the case of Norbolsa, the good tone of Repsol, Vidrala and Cie Automotive in the last quarter played in its favor.

Looking ahead to the coming months, despite the threats of the risk of recession that are planned in the market, experts are confident that the portfolio will be profitable with securities from various sectors.

The ranking of favorite securities for the quarter, according to the proposals of the 21 investment firms, is headed by Bankinter. It rises from the third position and represents 6.6% of the consensus portfolio. Experts point to it as the best positioned in terms of profitability/risk in the sector. They consider that it is a solid entity, with controlled risk, that can obtain a greater margin in its mortgage business with the rise in rates and they value the increase in the profitability of savings products.

In the financial sector, preferences have changed compared to the previous quarter and BBVA, which has fallen by nearly 16% in the year, gains positions in the portfolios.

Among the companies on the Spanish Stock Exchange with the best prospects is Inditex, which has risen from seventh position to second among the favorite stocks. The firm, now led by Marta Ortega, is down 18% so far this year and is undervalued, according to analysts. Despite the doubts generated by the change in the management leadership and the headwinds facing the sector, the textile firm presented record results in the last quarter.

"The results were very good in all the lines, which allowed us to provision the costs of the Ukraine and Russia for the entire year. The sales data we have for the second quarter show a good behavior and the positive evolution of the US stands out", comments Virginia Perez, from Tressis. The firms believe that Inditex is capable of absorbing the negative impact of the increase in the prices of raw materials, highlighting its efficiency and capacity to generate cash. They remember that it is a company without debt, especially relevant in the current environment of rising rates.

The third position in the ranking goes to Grifols. Investment firms continue to bet on the plasma derivatives manufacturer, although with less intensity than in the previous quarter. The rumors of a capital increase have sown some doubts, although they have been denied by the company. Analysts say that Grifols has achieved self-sufficiency in plasma, is well positioned in China and is sharpening its innovation efforts. They believe it offers accelerated revenue growth and margin expansion opportunities.

The energy sector remains among the most recommended, although with some changes. Iberdrola becomes the value of this group with more weight among the bets. Although the regulatory risk weighs on the sector, the company has confirmed its forecasts for 2022, with an estimated profit of 4,200 million euros, a fact that investors should assess in times of uncertainty such as the current one.

The good behavior accumulated by Solaria, which scores close to 30%, means that the recommendations are not so strong. Repsol also gives up positions, with fears of a recession hovering and the possibility that this will be reflected in a drop in the price of oil.

On the other hand, Enagás enters with force, which the previous quarter was not recommended by any firm. With a dividend yield of close to 8% for the next few years and recurring income, it is a perfect candidate for the defensive side of portfolios. It offers growth in the medium and long term due to investments related to gas and green hydrogen. It has reorganized its structure to focus on the energy transition and security of gas supply, critical issues now. Until 2026, its commitment is to maintain the dividend.

Beyond the energy sector, firms increase their confidence in Telefónica, which is listed in the 2020 high zone and has scored more than 26% since January. It has an attractive dividend yield of more than 6% and payments from now on in cash. And it is showing an improvement in results in some areas that could be expanded thanks to the consolidation of the sector in Europe and less competition.

Infrastructures are seen as an opportunity and Ferrovial rises from 18th to seventh place among the favorites because it offers protection against inflation and exposure to the recovery of the cycle, via traffic (motorways and airports). 80% of the cash flow comes from North America, where the impact of the war in Ukraine will be less. In addition, it can benefit from Biden's infrastructure plan due to its solid financial situation.

Tourist values ​​sneak into the summer portfolio with Meliá and IAG.