After traveling 900 kilometers by bike, the Xacobea AC Hotels Route, a unique sporting and business event in Spain, reaches the Plaza del Obradoiro in a year marked by a record number of pilgrims. 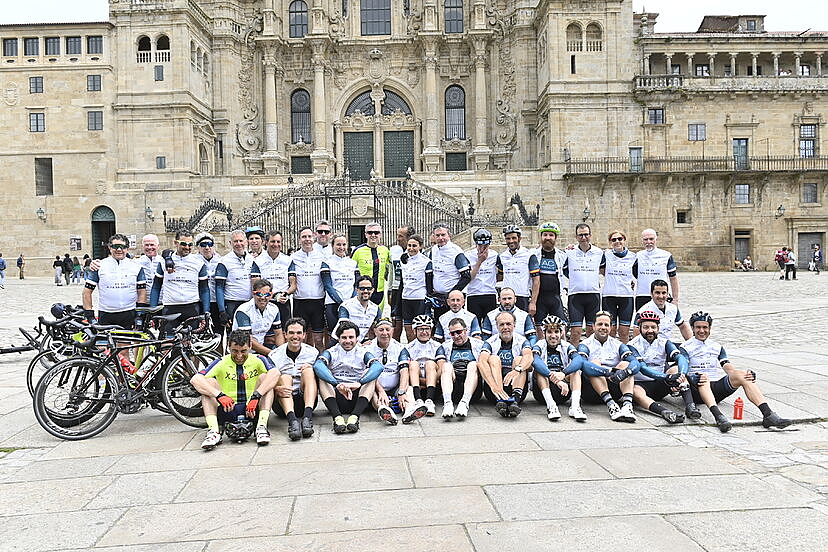 After traveling 900 kilometers by bike, the Xacobea AC Hotels Route, a unique sporting and business event in Spain, reaches the Plaza del Obradoiro in a year marked by a record number of pilgrims.

The sporting event organized by businessman Antonio Catalán to cycle the Camino de Santiago, La Ruta Xacobea AC Hotels, experienced a double celebration yesterday. The expedition successfully reached the Plaza del Obradoiro, and did so at a historic moment for Santiago de Compostela.

The Camino de Santiago is breaking a record for pilgrims this year, even surpassing the historical figures that were recorded before the pandemic. The Xacobea AC Hotels Route has celebrated its XXXII edition this year. It has been 32 years in which, consecutively, Catalán -known for having founded the NH chain, and later AC Hotels- has traveled the Camino de Santiago by bicycle. First it was with a small group of friends. Afterwards, the Xacobea AC Route has been joined by participants, but always with a common denominator: "Friendship", as the Catalan himself recalls.

Dozens of directors and businessmen now participate in the Ruta Xacobea AC, as well as professionals from the hotel chain itself, elite athletes and family members of Antonio Catalán. Every year is relevant, but 2022 has been the most special of all. The AC Route, like the hotels it represents, has recovered its pre-Covid rhythm. The event has once again brought together more than fifty participants, including cyclists and support staff. It has thus returned to the figures from before Covid. Everything has gone in line with the spectacular recovery that the Camino de Santiago itself is experiencing.

It is estimated that more than 40,000 people have collected the compostela so far this year, that is, the accreditation that shows that the Camino de Santiago has been traveled under a series of requirements depending on whether it is done on foot, by bicycle or on horseback. . To that figure we should add thousands of other people who also do the Camino de Santiago but do not request that accreditation. The AC Route this year, as usual, started in Corella, Catalán's hometown near Tudela.

For six consecutive days in as many stages, the Route has covered the distance that separates that city of Navarra from Santiago de Compostela, with overnight stays in the chain's hotels. They have been around 900 kilometers in which four autonomous communities, half a dozen provinces and almost a hundred towns have been crossed, some of which have an incomparable cultural and historical wealth, such as Santo Domingo de la Calzada, Castrojeriz or Samos, before arriving to the Plaza del Obradoiro.

Almost a dozen mountain passes or notable peaks have also been climbed, such as Alto de la Pradilla, O Cebreiro and Foncebadón. In the latter is the Cruz de Ferro, the best-known shrine of all those that pilgrims on the Camino de Santiago find on their way. The shrines are mounds in which, according to tradition, the pilgrim must deposit a stone, preferably brought from his place of origin, to symbolize that he leaves behind all his sorrows.

The year 2022 undoubtedly serves the Xacobea AC Route and the Camino de Santiago itself to leave behind, but without ever forgetting them, the difficult years that the pandemic meant for everyone. Unlike 2020 and 2021, in which the Camino de Santiago suffered a huge drop in the number of pilgrims -with the economic consequences that this has had for entire regions and towns-, 2022 is experiencing an unprecedented explosion. It was a success to also declare a Holy Year (Compostelano or Xacobeo Year) to 2022, and not only 2021, as per the calendar.

Since Catalan began the Route, a thousand people have participated, fully in all its stages or in part of them. Not only relatives of Catalan. Also professionals from all sectors and well-known politicians and athletes. A regular participant has been Miguel Induráin, winner of the Tour de France five consecutive times. Roberto Heras, winner of the Vuelta a España four times, José Ramón Navarro, president of the National Court, and Alfonso Rueda, president of Galicia, have also participated this year.