A sport in which audiences and ticket sales fall, but revenues continue to grow, is good business. 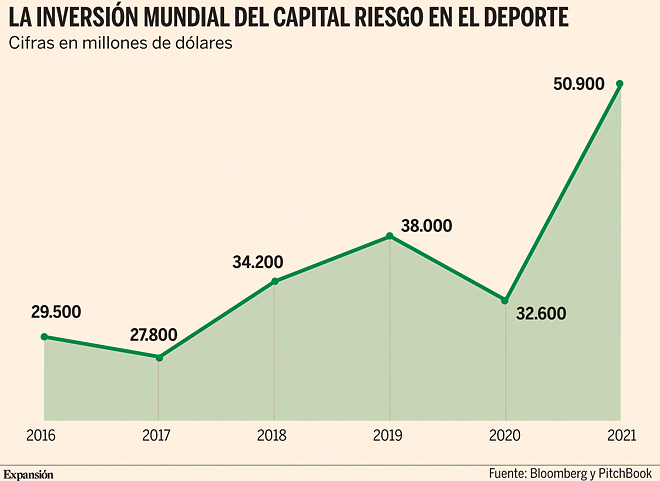 A sport in which audiences and ticket sales fall, but revenues continue to grow, is good business. CVC realized this in 2006, when it bought Formula 1 for $2 billion. If a race did not achieve a good capacity data, the fund was indifferent, since the affected circuit had to pay the corresponding fee in advance to participate in the World Cup, regardless of the public that later populated the stands. And despite occasional losses in audience, television agreements always ended up being renegotiated upwards. In fact, the largest contract ever closed by the event took place in 2016 with the Sky chain, which disbursed 1,200 million euros despite the fact that the category accumulated three years with a declining following.

Thus, it is not surprising that a year and a half before the British fund sold this championship to Liberty Media for 8,000 million dollars -including debt-, the return that it had already obtained with respect to its initial investment was 350%.

Before his time in F1, CVC also did business in MotoGP, where he entered in 1998 contributing 71.5 million euros. It was precisely his commitment to motorsports that forced him to leave racing on two wheels, since the European Union considered that his presence in both events violated antitrust legislation. That did not prevent the firm from multiplying its initial investment by almost seven, since it sold its stake for 525 million.

Five years after leaving the circuits, CVC has chosen Spain to continue collecting juicy dividends from its investments. The group has injected almost 2,000 million in the First and Second Division teams - with the exception of Real Madrid, Barcelona and Athletic Club - in exchange for 8.2% of the commercial business of LaLiga. The objective is that the clubs take advantage of this money to promote new sources of income that make them less dependent on television rights. The utility that will be given to this money will be monitored, and the venture capital group will be in charge of offering advice if necessary to speed up the recovery of the funds contributed. In fact, there is already an approximate date.

"We will leave LaLiga after a little more than five years have elapsed. There is no exact date, but in these operations it is normal to leave in 8 or 10 years," Juan Arbide, general director of CVC, announced a year ago.

At club level, the most notable operation took place last year, when Ares Management became a shareholder of Atlético de Madrid, injecting 120 million euros. The North American fund, which manages assets worth almost 300,000 million dollars, took over 33.96% of Atlético Holdco, the company through which Miguel Ángel Gil and Enrique Cerezo have the titles of the Madrid team.

But Spanish football is not the only one in which the big investment firms have focused their eyes. A little over a week ago, the purchase of a historic team from the king of sports, such as AC Milan, was closed for 1,200 million. The new owner of the Italian group is the RedBird fund, which will be in the team's shareholding together with Main Street Advisors, a Los Angeles fund that has LeBron James, Drake, Bono (U2) and Arnold Schwarzenegger among its investors.

In France, once again it is CVC that has landed strongly this year, having bought 13% of a new commercial subsidiary of the French Professional Football League (LFP) for 1,500 million euros. In Germany, on the other hand, the refusal of several clubs to close an agreement with similar characteristics left the British group out of an operation in which KKR and Bridgepoint were also interested.

The funds are beginning to make room for themselves in the capital of the clubs of the Old Continent despite the fact that the current league format, which unlike the American one can cause demotions, has always aroused concern.

However, the sector has shown its economic potential after the harsh impact of the pandemic on its accounts. It should not be forgotten that, for more than a year, stadiums and pavilions were empty or with reduced capacity, collapsing the main source of income for the biggest competitions, after television rights. This strength has convinced the funds to shell out hundreds of millions to organizations that remain reluctant to give them decision-making power, but see their money as an opportunity to diversify their sources of income.

And it is that the Covid-19, although it did not cause any debacle in the sector, caused the start-up of new projects to require excessive indebtedness from teams and leagues. Hence, some of the vetoes that weighed on this type of fund were lifted. Especially in the US.

The NBA allows venture capital to buy a minority stake in its franchises from January 2021. This led to Arctos Sports Partners, a firm with 3,000 million under management, to take 13% of the Golden State Warriors at the end of last year. Taking into account the market value that Forbes gave to this team at the time of the operation, the second highest in the entire competition, this participation would have a value of 700 million dollars. The firm is also present with a nearly 17% stake in the capital of one of the Warriors' rivals, the Sacramento Kings.

For its part, Blue Owl, through its Dyal HomeCourt fund, owns stakes in the Atlanta Hawk, Phoenix Suns and Kings.

These two funds have been the most active in investing in the world's biggest basketball league, although they have done so under different conditions. While Arctos, a firm specialized in the sports sector with a presence in 16 teams, cannot enter the capital of more than five NBA teams, Dyal obtained the green light from the owners to invest in all the franchises he wanted. At the end of last year, the firm had spent 200 million in the league.

In the state of Texas, Sixth Street Partners bought 20% of the San Antonio Spurs at the beginning of the year. At the same time, Michael Dell, founder of the technology company that bears his surname, took another 10% in an operation that valued the team at 1,800 million dollars. Sixth Street is known in Spain for having acquired 30% of the business of the new Santiago Bernabéu for the next 20 years for 360 million euros and 25% of the television rights of FC Barcelona for 607 million euros.

These funds await with anticipation the renewal of the television rights of the NBA. The current contract in force ends in the 2024/2025 season, and with Disney as one of the favorite groups in the bidding, the league aspires to triple its annual income, going from obtaining 2,600 million dollars a year for its broadcasts to pocketing some 8 billion.

In the American Football League (NFL, for its acronym in English), the veto on investment funds is maintained, but the competition faces a paradoxical situation in the coming years. Given that its 32 franchises continue to increase in value and are already valued at at least 3,000 million dollars, it is increasingly difficult to find entrepreneurs who meet the necessary financial requirements demanded by the competition in order to own one of their teams. This delayed until this summer the sale of the Denver Broncos for 4,650 million dollars and may lead the biggest competition in the US to make room for venture capital in the capital of its franchises.

"Franchise values ​​have skyrocketed and capital structures at clubs have become more complicated. The idea of ​​having a fund, which would essentially be a passive investor in a club or clubs, is helpful in terms of facilitating sales. of these clubs," said Rob Manfred, commissioner of the Major League Baseball (MLB), already in 2019. The organization he leads anticipated the problem facing the NFL and was the first to allow funds into its teams. Its operating margins and growth forecasts are lower than those of the NFL and the NBA and, at the moment, the Arctos fund is the only one that has invested in it, but in the last decade it has experienced a revaluation that makes the once favorite pastime of America in a more attractive bet than the Stock Market. Between 2002 and 2021, the MLB appreciated 669%.