The president of CEOE, Antonio Garamendi, today rejected an agreement that would index wage increases to the consumer price index (CPI) to avoid second-round effects and the loss of competitiveness of companies. 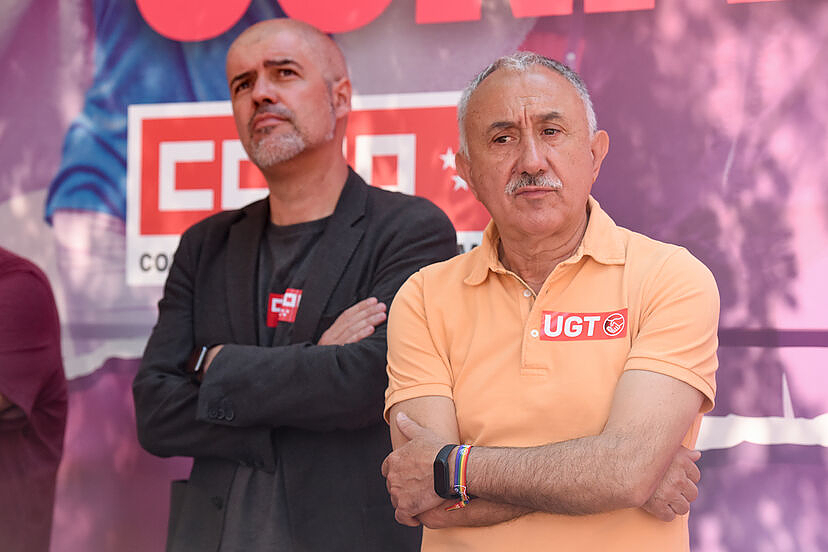 The president of CEOE, Antonio Garamendi, today rejected an agreement that would index wage increases to the consumer price index (CPI) to avoid second-round effects and the loss of competitiveness of companies.

CCOO and UGT have demonstrated this Wednesday before business organizations throughout the country to demand the maintenance of the purchasing power of wages, and have warned of an increase in social conflict after the summer if the CEOE employers remain in their "closure ".

In front of the CEOE headquarters, the general secretaries of the UGT and CCOO, Pepe Álvarez and Unai Sordo, have summoned the employers to sit down again at the negotiating table of the agreement for employment and collective bargaining, after at the beginning of They considered it closed in May due to the impossibility of agreeing on a salary framework that would serve as a reference when negotiating collective agreements.

The discrepancy that could not be overcome then had to do with the recovery of salary guarantee clauses linked to inflation, an essential issue for the unions and inadmissible for the employers.

The president of CEOE, Antonio Garamendi, today rejected, in statements to Onda Cero, an agreement that indexes wage increases to the consumer price index (CPI) to avoid the effects of the second round and the loss of competitiveness of the Business.

Garamendi is in favor of wages rising, but against including in a framework agreement a clause that automatically revises wages with inflation, since it would condition collective bargaining and not all sectors can afford it.

Thus, the unions have decided to "stress" the situation, in the words of Unai Sordo, given that the conflict is serving to close "important" salary agreements such as those for metal in Cantabria or A Coruña, where after several days of strike, increases of over 4% have been achieved with salary guarantee clauses.

If this is "perfectly possible" in sectors that export and compete abroad, "why is it not possible to reach a great wage agreement in Spain that guarantees the purchasing power of wages and allows collective bargaining to be pacified?" asked the leader of CCOO.

"Let the bosses make no mistake (...) the union organizations have to mobilize the workers who are with the blocked agreements so that they fill the streets, so that the factories and work centers stop and we manage to break this barrier that It prevents us from being able to maintain salaries," said Pepe Álvarez.

Before this afternoon's meeting with the Government, which wants to once again promote the idea of ​​a national income pact, the CCOO has been in favor of a large social agreement to distribute the impact of the price increase, but Sordo has ensured that the Executive also has to contribute to it.

"The Government has to specify what it puts on the table (...) an income pact is impossible without offensive and courageous fiscal measures," he stated.

In his opinion, corporate tax must be addressed, not just create a tax for large energy companies, because there are many companies that are passing on the entire cost in consumer prices so as not to reduce their margin, while many others have spent years accumulating "billions of surpluses".

Garamendi, however, believes that the Executive should specify what it intends to do with pensions and public salaries because when it comes to an income agreement "it is not worth circumscribing it to what is done in private activity."