The number of unemployed registered in the offices of the public employment services (former Inem) rose by 17,679 unemployed in September (0. 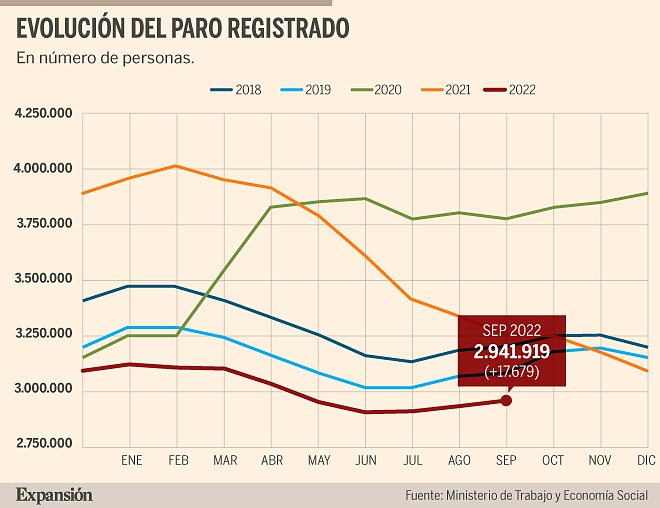 The rise in unemployment in September, the third consecutive after those of July and August, is the highest in a month of September since 2018, when it increased by 20,441 people, although it is more moderate than usual for this month, which in the average of the years 2008-2019 it added 46,307 unemployed.

"This is a smaller increase than usual and that follows the general trend of this month, marked by the strong seasonality after the summer campaign," underlines the Ministry.

Since 1996, the year in which the comparable historical series begins, there have been increases in unemployment in 22 months of September and decreases in five, the last two in 2020 and 2021. In seasonally adjusted terms, registered unemployment rose by 466 people in September . In the last year, unemployment accumulated a decrease of 315,883 unemployed, which is 9.7% less.

On the other hand, the group without previous employment added 5,016 unemployed (2%), and above all services, which add 24,691 unemployed (1.2%) after the end of the eventual hiring linked to the summer season.

By age, unemployment among young people under 25 years of age increased by 6.5% in September, with 12,787 more unemployed than at the end of August, while unemployment among people aged 25 and over grew by 4,892 unemployed (0. two%). Despite the rise registered in September, the total number of unemployed young people under 25 years of age (210,273) is the lowest in a month of September in the entire historical series. Labor also highlights that stable hiring is recovering: 46.72% of the new contracts signed are of an indefinite nature.

Registered unemployment fell in five autonomous communities and rose in the rest. The most pronounced falls in absolute figures occurred in the Basque Country (-2,078), the Canary Islands (-1,628) and the Valencian Community (-1,250).

Regarding spending on benefits, in August, the last month for which data is available, there were 1,796,339 beneficiaries, to whom a total expenditure of 1,763.4 million euros was allocated. The average monthly expenditure per beneficiary, not including the agricultural subsidy of Andalusia and Extremadura, in the month of August 2022 was 1,004 euros.