The Spanish economy stagnates in the third quarter by growing only 0.1%

Despite its worst behavior in the third quarter, domestic demand (consumption and investment) contributed 0. 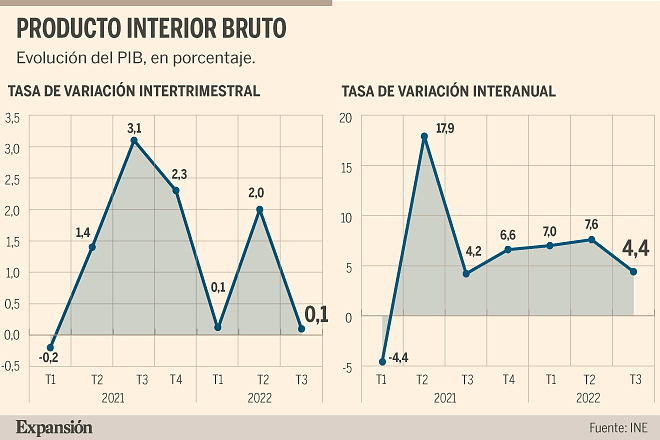 Despite its worst behavior in the third quarter, domestic demand (consumption and investment) contributed 0.5 points to growth, while foreign demand (exports and imports) subtracted 0.4 points due to the slowdown in foreign sales .

The INE has revised growth for the second quarter upwards, to 2%, so the slowdown in the economy in the third quarter was 1.9 points.

The quarterly growth of 0.1% registered in the third quarter is due to the slowdown in household consumption, since it only increased by 0.1%, which is 1.6 points less than in the previous quarter.

On the other hand, the consumption of non-profit institutions increased by 0.9%, compared to the growth of 0.5% of the previous quarter, while public spending, for its part, shot up by 1.4% between July and September, returning to positive rates after three consecutive quarters of declines.

Investment, for its part, fell by 0.1% in the third quarter, compared to the increase of 2.9% in the previous quarter.

For its part, the growth of the Spanish economy in the interannual rate that advanced on October 28, of 3.8%, has been revised upwards by six tenths, up to 4.4%. This rate, however, contrasts with the growth of 7.6% in the second quarter of the year.

Statistics explains that in the advance data for the third quarter, most of the statistical indicators on recent economic developments offered results up to August.

However, the results that are published this Friday already incorporate all the statistical indicators that mark the economic evolution of the third quarter, "whose information already covers, in the vast majority of cases, the whole of it," he specifies.

‹ ›
Keywords:
EconomíaMacroeconomíaPIB
Your comment has been forwarded to the administrator for approval.×
Warning! Will constitute a criminal offense, illegal, threatening, offensive, insulting and swearing, derogatory, defamatory, vulgar, pornographic, indecent, personality rights, damaging or similar nature in the nature of all kinds of financial content, legal, criminal and administrative responsibility for the content of the sender member / members are belong.
Related News