Queen Letizia received the first lady of the United States, Jill Biden, at the Palacio de la Zarzuela on Monday in the first of the events in which they will coincide from today until Thursday during their stay in Madrid on the occasion of the NATO summit. 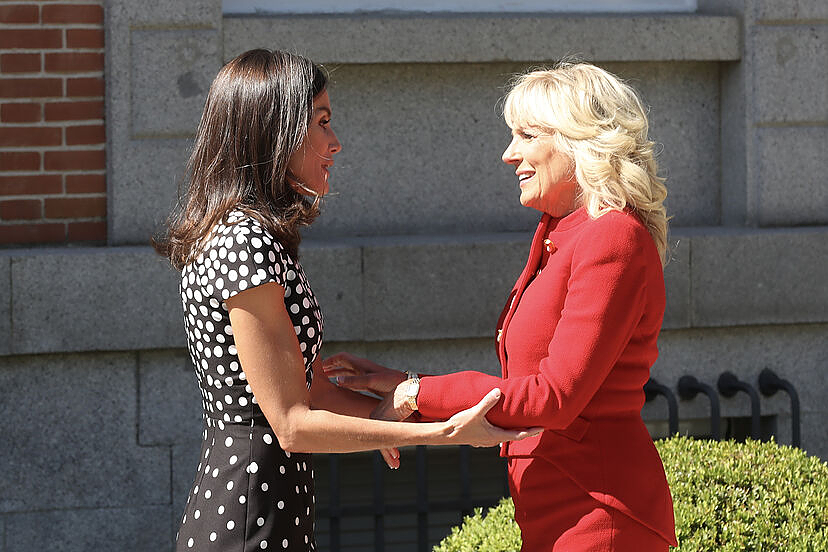 Queen Letizia received the first lady of the United States, Jill Biden, at the Palacio de la Zarzuela on Monday in the first of the events in which they will coincide from today until Thursday during their stay in Madrid on the occasion of the NATO summit.

The queen welcomed Biden on the outside steps of the Zarzuela, where they greeted each other very cordially, holding hands, according to the images distributed by the Casa del Rey.

Later, Doña Letizia and the first lady, who has worn a red dress, have entered the interior of the palace to have a conversation in a room with white sofas, which has lasted for about 45 minutes.

Biden's wife arrived in Madrid last night, while the US president will do so tomorrow, Tuesday, when he will be received by Felipe VI at the Torrejón military base (Madrid), from Germany, where he is participating in the G7 summit.

After their meeting at Zarzuela, the queen and Jill Biden went to the headquarters of the Spanish Association Against Cancer (AECC) to find out about the work that this entity carries out against the disease.

Jill Biden, 71, has been a high school teacher since 2009, a job she combines with that of first lady.

Education, the fight against cancer or mental health are some of the issues in which the American first lady is most focused and which coincide with the areas in which the queen also works, so in their first talk they have exchanged some first impressions on these social policies.

Biden's wife has also emerged as a defender of women's rights, which she made clear last Saturday when she showed her rejection of the decision of the United States Supreme Court to revoke the right to abortion.

"For almost 50 years, women have had the right to make their own decisions about their bodies. That right has been stolen from them. Although we are devastated by this injustice, we will not remain silent (...) Tomorrow we will continue the fight for our daughters, our grandmothers and ourselves until all women can once again decide for their future," she said on social media.

The agenda of the queen and Jill Biden will continue tomorrow, Tuesday, with a visit to the reception center for Ukrainians in Pozuelo de Alarcón (Madrid), and at night, at the dinner that the king and queen will offer at the Royal Palace to the leaders of NATO countries attending the summit.

On Wednesday and Thursday, parallel to the meeting of the allied countries, there will be an agenda of events for the consorts of the heads of state and government, where the queen will once again coincide with the American first lady.

They will first go to the Royal Site of La Granja de San Ildefonso (Segovia) to enjoy the fountains in the gardens, visit the royal palace and the Royal Glass Factory, and later, they will go to the Reina Sofía Museum to see the "Gernika" of Picasso and share a meal.

The program of activities for the consorts will be completed on Thursday with a visit to the Royal Theater in Madrid.

Upon her arrival in Madrid last night, Jill Biden was received by the US ambassador to Spain, Julissa Reynoso, who was the former chief of staff of the first lady's office.

"This visit will place special emphasis on several global challenges, such as the fight against cancer and support for Ukraine, in which the United States and Spain collaborate closely," Reynoso said on Twitter.

It is the first time that the queen and Jill Biden have coincided since her husband's arrival at the White House in January 2021 to replace Donald Trump.

Doña Letizia already received Michelle Obama at the Zarzuela when she was first lady of the United States in June 2016 when she gave a conference in Madrid.