In its interim Economic Outlook report published today, the Organization for Economic Co-operation and Development (OECD) corrects its own projections made in June by seven tenths to take into account a global scenario, and especially a European one. 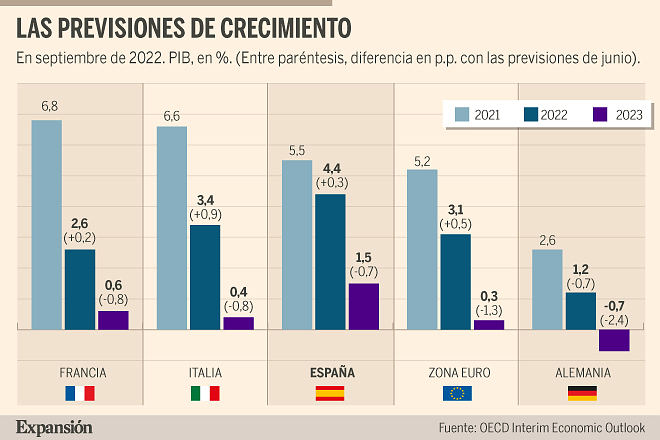 In its interim Economic Outlook report published today, the Organization for Economic Co-operation and Development (OECD) corrects its own projections made in June by seven tenths to take into account a global scenario, and especially a European one. , more pessimistic.

That 1.5%, which in any case will be above the discreet increase of 0.3% that is predicted for the euro zone as a whole (especially due to the recession expected in Germany) and the stagnation of the British economy , is below the "around 2%" that the Government says it expects now, after having abandoned 2.7% of its last macroeconomic chart.

The organization, however, is more optimistic for 2022 than the Minister of Finance, María Jesús Montero, who last Thursday also reduced her expectations to a growth of 4% (instead of 4.3% of that macroeconomic picture), and leaves it at 4.4%.

That is, three tenths better than what the OECD had forecast in its previous Economic Outlook report in June.

Spain is one of the large developed countries in which energy costs have increased the most in relative terms with the current crisis.

If in the 2019-2021 period these costs were already particularly high in Spain (5% of GDP, compared to less than 4% in Germany, France, the United Kingdom or the United States), in 2022 they have skyrocketed and will represent close to 11% of GDP.

This is due to the great dependence that the Spanish economy has on energy, greater than almost all other developed countries, now aggravated by the rise in the price of oil and gas, and which is therefore affecting the whole of the prices, as is visible when analyzing inflation.

The situation should moderate somewhat next year, but without going back even remotely to the pre-crisis situation. The expected inflation in Spain will be 5%, lower than that of the euro zone as a whole (7.5% in Germany, 5.8% in France, 4.7% in Italy) which, like the United Kingdom, (5.9%) will continue to be muddy due to the problem of energy supply.

The OECD insists that although public aid is needed to cushion the impact of the energy shortage for families and companies, this must be done on a "temporary basis and concentrated on the most vulnerable" and not, therefore, with general grants.

In addition, it recommends withdrawing these aids as the pressure of energy prices decreases and maintaining the incentives to reduce energy consumption.

In short, short-term efforts to make energy affordable must be accompanied by "stronger political measures to encourage investment in clean technologies and energy efficiency."