In his welcoming speech, Felipe VI asks to extend NATO unity to partners with the same values. 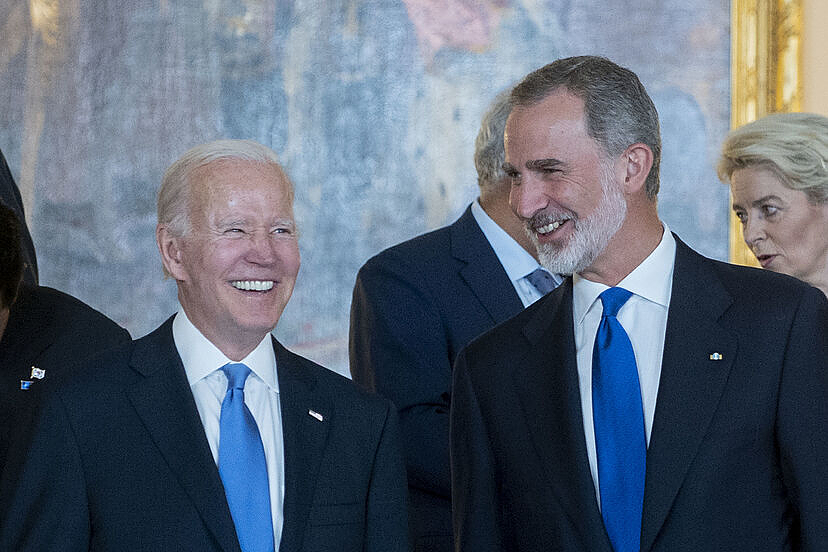 In his welcoming speech, Felipe VI asks to extend NATO unity to partners with the same values. He reminds them that they must also attend to the "unstable neighborhood in the south".

Felipe VI made this Tuesday an appeal to the Heads of State of the NATO member countries. At a welcome dinner at the Royal Palace, prior to the start of the Madrid Summit, the King encouraged extending his association to countries "with whom we share values, principles and goals." He, in turn, asked the leaders not to fall into pessimism after the setback is the stability suffered in Europe due to the "unjustifiable aggression of Ukraine" by Russia. Recalling the 1997 Madrid Summit, which faced a less worrisome world outlook, Felipe VI asked that "the strategic optimism of 1997 open the way not to pessimism but to strategic realism".

In addition, Felipe VI, during his participation in a forum on NATO organized by the Elcano Royal Institute, highlighted the importance of not forgetting other threats, even though Russia's is now the most urgent: "Today, while Europe is fighting for political stability, economic prosperity and social well-being, it faces the threat of an increasingly unstable neighborhood, both in the east and in the south, and the complex challenge of a chronically unpredictable world. And all this when "20 years ago we congratulated ourselves that Europe had never been so safe, prosperous or free. Since then, many of our post-Cold War assumptions seem to have evaporated."

In this way, the Spanish Head of State verbalized a concern common to the governments of European powers, such as Spain, France and Germany. NATO's southern neighborhood encompasses a large area of ​​the world that includes North Africa, the Balkans and the Middle East. The President of the Spanish Government, Pedro Sánchez, also highlighted the African Sahel zone on Tuesday as one of the conflictive points to which special attention should be paid in the coming years.

In the opinion of Felipe VI, there is currently a "long global struggle between tyranny and democracy that is more important than ever. This context demonstrates the importance of NATO, a benchmark of freedom, as an Alliance that offers credible deterrence against security threats to its members. Unity and freedom are strategic values ​​in a world defined by the return of great power competition and a renewed struggle between democracy and autocracy, trends that are not confined to the Euro-Atlantic space".

It was not by chance that Felipe VI mentioned in his speech the presence at the Summit of delegations from Australia, Japan, South Korea and New Zealand, countries of the Indo-Pacific zone.

Although they are not members of NATO, they have an interest in the development of the Alliance talks on China. Felipe VI specified that in that area of ​​the world there are "geostrategic developments to which we cannot turn our backs. They are competitors who continue to question the international order." The King acknowledged that "getting support beyond the Euro-Atlantic area is proving to be considerably difficult."