The G7 leaders today promised "all the support that is necessary" and "as long as it is necessary" to Ukraine, while approving new sanctions against Moscow, in addition to warning that they do not rule out "other options" against Russia. 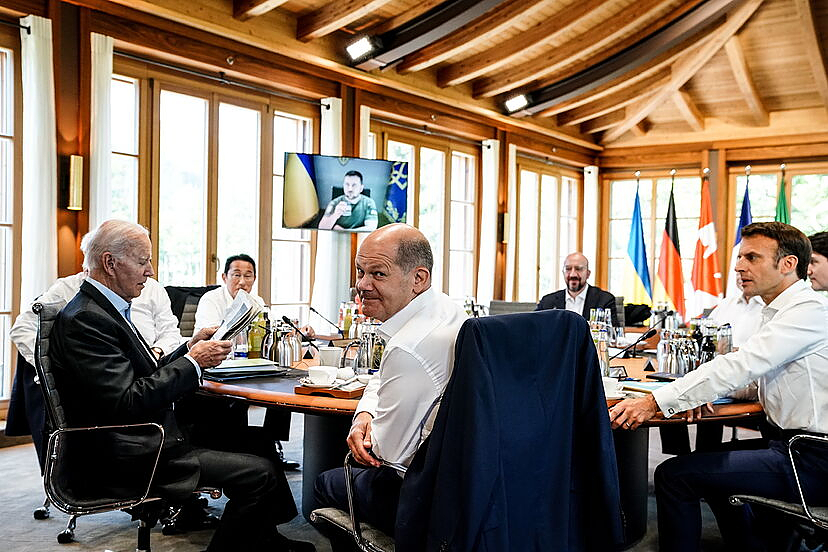 The G7 leaders today promised "all the support that is necessary" and "as long as it is necessary" to Ukraine, while approving new sanctions against Moscow, in addition to warning that they do not rule out "other options" against Russia.

"We have decided to extend the sanctions to further restrict Russia's access to key technologies and industries and other resources," says the statement issued by the German presidency of the G7, after the virtual intervention of the Ukrainian president, Volodímir Zelenski, before the leaders of the cluster.

The statement specifies that support for Ukraine will continue "as long as necessary", while urging Russia not to block Ukrainian wheat exports, but to allow their exit through "free corridors".

It also demands that Moscow organize the "immediate return" of Ukrainians forcibly deported from its territory by Russian troops.

"We will continue to explore new ways to isolate Russia," he warns, in the chapter on the new sanctions, measures that, the text continues, will be "examined" by the authorities of the respective countries to proceed with their implementation.

"We will continue to explore new ways to isolate Russia from participation in the global market and combat the evasion" of sanctions, add the members of the G7, who insist: "we are determined to cut Russia's income, including those from gold".

In addition, they warn that sanctions will be expanded to "further restrict Russia's access to key industrial inputs, services and technologies produced by our economies, especially those that support the industrial and technological weapons sector."

The objective of these sanctions is to act on Russia, for its responsibility in war crimes, illegitimate exercise of its authority over Ukraine and efforts aimed at increasing global food insecurity," it continues, for its "illegitimate" blockade of Ukrainian grain.

The declaration follows Zelenski's virtual intervention before the leaders of the G7 - the United States, Canada, Japan, the United Kingdom, France, Italy and Germany -, meeting since yesterday in Elmau (southern Germany) in a summit whose dominant theme it is the war in Ukraine and its ravages in the global economy.

The session was held behind closed doors, but according to EU and German diplomatic sources, Zelensky asked the G7 leaders for anti-aircraft defense systems, aid for the reconstruction of his country and a strategy against the Russian blockade of wheat exports.

The Ukrainian leader also urged the G7 to resolutely support his country and warned that the war against Russia must end before the arrival of next winter.

He also asked that the sanctions against Russia be tightened, something that, according to US sources, will be approved at this summit, which will close tomorrow, Tuesday.