Spain, condemned to support a public deficit above 4% until 2027

Public accounts do not add up in Spain. 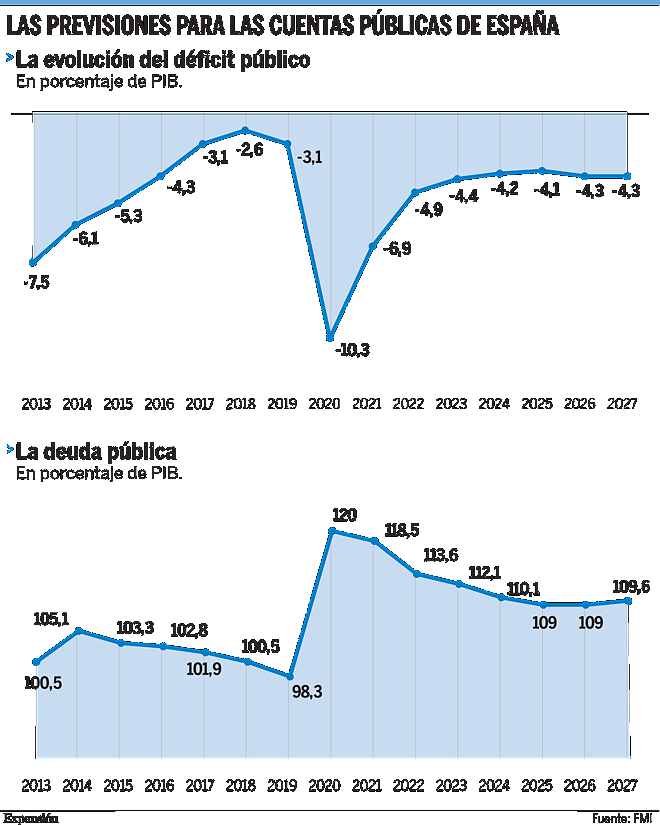 Public accounts do not add up in Spain. With a runaway debt of 113.6% of the Gross Domestic Product (GDP) for this year and the forecast that it will remain above 109% in the next five years, it is among the worst in the eurozone, according to the Fiscal Monitor published today by the International Monetary Fund (IMF).

The harsh reality that the statistics reflect is that Spain, despite not being one of the countries that allocated the most public funds to the fight against the consequences of the pandemic, sadly is among those that are having the worst time paying the bill, which is not It will not be paid off even in the next five years. In fact, and although since the worst of the confinements it has managed to reduce the public deficit, the imbalance between what the State enters and what it spends will remain above 4% at least until 2027.

In 2020, the Government of Pedro Sánchez responded with a battery of economic measures against Covid-19 that represented a blow to public accounts of 100,000 million euros, taking public debt to levels above 120% of GDP, records never seen for more than a century, specifically, since the Cuban War.

The problem was that while some countries, such as Germany, had reached this situation with an enviable fiscal situation, Spain did not have much room for manoeuvre. That year, the public deficit soared from 3.1% to 10.3%. Last year, thanks to the economic recovery after the remission of the pandemic, it fell to 6.9%. And, if the IMF's forecasts come true, this year we would end up with red numbers in the public accounts of 4.9%.

The IMF forecasts are released just a few days after the Spanish Government has presented the General Budgets for 2023, which include spending of 198,221 million euros, 1.1% more than this year, which will be financed with higher tax pressure. Among his forecasts, the deficit will fall to 3.9%, a figure that does not coincide with IMF statistics.

"In a context of high inflation, high indebtedness, rising interest rates and high uncertainty, coherence between monetary and fiscal policy is essential. In most countries, this means maintaining a restrictive budget", as as Vitor Gaspar, director of the IMF's Department of Fiscal Affairs, has pointed out.

There are many voices warning of a new almost imminent recession, but there is not much room for maneuver in the face of another crisis. "The most indebted countries exhausted their margin of fiscal response with the pandemic," according to this expert. This is where Spain and its public accounts are located. And it is not only a question of being able to react with fiscal policies, it is also a matter of credibility.

"Although it is difficult from a political point of view, a gradual and constant fiscal adjustment is less damaging than a collapse of the public accounts caused by the loss of market confidence." The IMF is not talking about raising taxes, but about not succumbing to the temptation of applying expansionary fiscal policies in a context of high inflation, such as the cut recently announced in the United Kingdom (even so, the country led by Liz Truss would end 2027 with a 1% deficit.

Unlike last year, when the IMF even suggested the creation of a temporary tax on large estates and companies to deal with the expenses of the pandemic, now it is committed to sobriety and tax balance. Don't raise taxes, but don't lower them either.

The only exception it contemplates is limiting the incentives to cases of extreme vulnerability. In the case of Europe, he specifically refers to the energy crisis, which he describes as "particularly deep and prolonged, and likely to be persistent." In Gaspar's opinion, "given the magnitude of the crisis, many households and companies need support to facilitate adjustment."

Therefore, here he does see with good eyes reducing taxes and even modifying the price system -such as the one known as the Iberian exception that limits the price of gas in Spain and Portugal-.

Even so, he recommends thinking carefully about any new policy, since the IMF has analyzed close to a thousand interventionist measures to alleviate the increase in both food and energy prices in 174 countries and has concluded that in most cases they are not effective and "they do not alleviate the problem of those who really need it", but they do increase public spending.

Special emphasis has been made by the agency when proposing the fight against price escalation. "Reducing the deficit is vital to fighting inflation." In the short term, it may seem that it is positive for public accounts, since it increases tax collection -an additional 30,000 million euros this year in the case of Spain-, but the reality is quite different: it makes credit more expensive, increases delinquency and distances to investors.

In this scenario of high inflation, "governments should prioritize financial and macroeconomic stability over any other aspect", even if it is sometimes painful. The reality is that "the possibility of fiscal crises becoming more frequent and more disruptive around the world" has increased, the IMF expert explained.

At the moment, the Spanish government is not concerned about these statistics, among other reasons because Europe annulled the Stability Pact so that states could go into debt during the pandemic and finance their shock programs against the effects of Covid-19. This year, the moratorium continues and it is expected to last throughout 2023. From then on, if Spain's public accounts do not improve, our country will be forced to make harsh adjustments, as happened a decade ago. The IMF recipe is simple: "This is not the time to spend more."

Economy sources consider that "the IMF confirms the fiscal responsibility of the Government. The path of expected reduction of public debt is in line with that established in the Stability Program, which assumes that the ratio is close to 112% by 2023" .

‹ ›
Keywords:
EconomíaMacroeconomíaFMI
Your comment has been forwarded to the administrator for approval.×
Warning! Will constitute a criminal offense, illegal, threatening, offensive, insulting and swearing, derogatory, defamatory, vulgar, pornographic, indecent, personality rights, damaging or similar nature in the nature of all kinds of financial content, legal, criminal and administrative responsibility for the content of the sender member / members are belong.
Related News