The former Catalan president Carles Puigdemont has accused the Government of Pedro Sánchez this Saturday of "political, moral and economic corruption" against Catalonia, to favor the story of the leader of the PSC, Salvador Illa, and has exploded due to the investment deficit: "Damn! , now it is OK!". 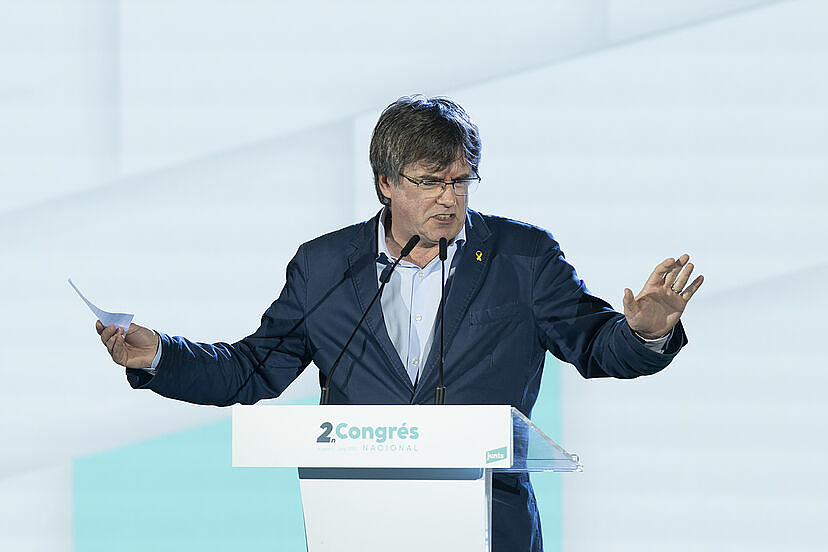 The former Catalan president Carles Puigdemont has accused the Government of Pedro Sánchez this Saturday of "political, moral and economic corruption" against Catalonia, to favor the story of the leader of the PSC, Salvador Illa, and has exploded due to the investment deficit: "Damn! , now it is OK!".

In his speech before the congress that JxCat celebrates this Saturday in Argelès-sur-Mer, in the south of France, Puigdemont referred to the controversy over the fact that the State executed last year in Catalonia 35.77% of the investment foreseen in the budget, while the Community of Madrid achieved an execution of 183.9%.

After the last speech by Jordi Sànchez as general secretary of JxCat, Puigdemont took the stage, where a video of his culminating moments as president was shown, including 1-O, and he gave one of his most vehement speeches, in his goodbye as party president.

For Puigdemont, "it is not normal" that the Spanish government, whether from the right or the left, "systematically lies and fails" with Catalonia.

"They will always consider us second-class or third-class citizens. The government lies and punishes all of us Catalans because we maintained the pro-independence majority," he denounced.

Referring to the low budget execution in Catalonia, he has accused the Government of campaigning for Illa "in a dirty way": "He is telling us that, as long as we vote badly and do not vote for the correct candidate, he will not invest what we deserve".

"They are doing their dirty work. Until you vote well they will not give us the money," said the former president of the Generalitat, according to the Efe agency.

In this way, according to Puigdemont, the State contributes to the "argument that the country is not doing well, that the Government is not working, with everyone's money."

"This is called political, moral, economic corruption, a corruption that you will never see prosecuted," he exclaimed.

Puigdemont has warned the Catalans who vote for PSC, Vox, Cs, comuns or PP that, as citizens, they should feel "just as harmed" as an independentist voter: "For Spain, the problem is that we are Catalans."

Puigdemont has pointed out that in Catalonia there are still no "conditions of normality", because the "state of repression has not stopped accelerating since that unfortunate speech by the king on October 3" 2017, after the unilateral referendum on 1-O.

He has also charged against the Spanish judiciary, stating that some judges "seem to be an extension of the Vox parliamentary group", and has denounced the "harassment of Catalan speakers" with the intention of "annihilating" Catalan.

"They are going for us," said Puigdemont, who has asked the independence movement to assume the "reality principle" without deluding themselves or sticking their heads underground like an "ostrich", since there is "nothing more magical than making a policy of normal times" in moments as "serious" as the current ones.

He took the opportunity to veiledly direct a dart at the ERC spokesman in Congress, Gabriel Rufián, who reproached the leader of the commons in Madrid, Jaume Asens, for his visits to Puigdemont.

In a message to Laura Borràs -who assumes the presidency of JxCat today-, to Jordi Turull -who becomes the general secretary- and to the rest of the new management, he asked to ensure that Junts will continue to be "the same project with the same purpose for which it was founded", without "never losing this north".

Faced with the "resignations" of others, he stressed, "Junts must be able to be recognized, whether we are in government or in the opposition, as the political tool that, despite having everything against it, remains serenely committed" to "complete" independence.