Pedro Sánchez warns the Andalusians: voting for the PP is the same as voting for Vox because "they will understand each other"

The President of the Government, Pedro Sánchez, has warned Andalusians that voting for the PP and for the "far right (Vox) is the same because in the end they will end up understanding each other" and has assured that when there is a socialist government, progress is made in rights and with the popular ones there are cuts. 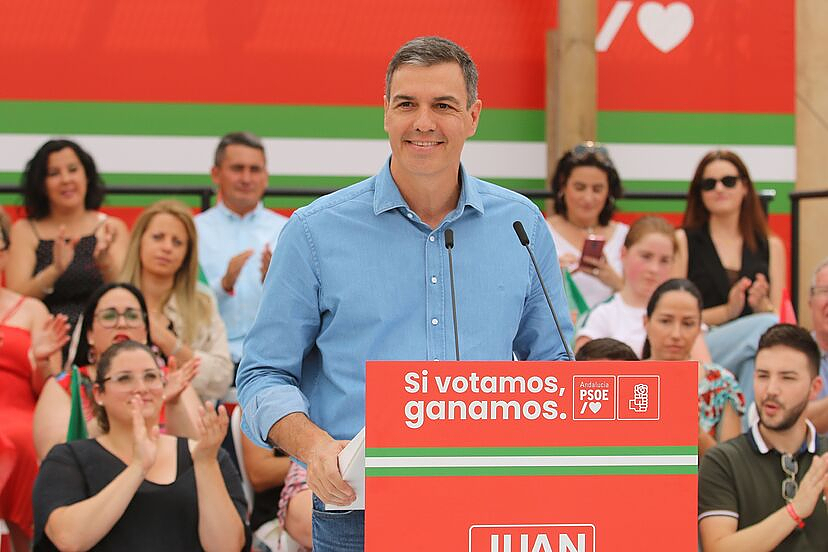 The President of the Government, Pedro Sánchez, has warned Andalusians that voting for the PP and for the "far right (Vox) is the same because in the end they will end up understanding each other" and has assured that when there is a socialist government, progress is made in rights and with the popular ones there are cuts.

Along with the candidate for the Junta de Andalucía, Juan Espadas, the leader of the PSOE has participated in a rally in Cuevas de Almanzora (Almería), Sánchez's first campaign act since it began on Friday and has done so with an intervention plagued with warnings against the PP, of which he has said that it is the party "of corruption" when it is in the Government and of "twitching" in the opposition.

On the contrary, he pointed out that the Socialist Party is the one "that has brought good things to Andalusia and Spain", perhaps they have not done everything that has been demanded of them, but "everything good that there is in Andalusia, it has done the PSOE", he has sentenced.

All those conquests that the socialist general secretary has attributed to his formation, then the PP - he has affirmed - "does not dare to touch them because they know that they are shared by the social majority", but now "with the extreme right in the equation", he has underlined All of this is no longer so evident, assuming that the PP, which is close to an absolute majority in the polls, will agree with Vox to remain on the Board.

Sánchez has again valued the response of his Government, first in the pandemic and now in the Russian invasion of Ukraine, exhibiting the latest unemployment data, corresponding to the month of May and which places the number of unemployed below three million, the lowest since 2008.

The fact that Spain has managed to beat all employment records in the last fifteen years, with a pandemic and a war in between "says very good things about Spain and something good about this Government, and nothing good about an opposition" that in order to deny it assures that these data are false, Sánchez insisted.

Pedro Sánchez has summarized part of the successes of the Coalition Executive "with the figure 20-50-1,000: 20 million Social Security affiliates, 50% of indefinite contracts and 1,000 euros of Minimum Interprofessional Salary", an achievement that has been done alone - Sánchez stressed, according to the Efe agency - "despite the opposition and with the opposition in front of us".

An opposition, the president has charged, that what he is trying to do is "overwhelm all of progressive Spain" so that it is considered inevitable that the only ones who can govern "are the right and the far right."

And they resort to noise, disqualifications and insults -he has repeated- so that "people do not find out that they vote against" any social advance of the Executive and initiatives such as the revaluation of pensions or the minimum wage.

Sánchez, who does not doubt that the PSOE is the one that is helping to improve people's day-to-day lives, has also recalled that they are the Government that deployed the ERTE, the ICO credits or the aid to the self-employed during the Covid crisis. , the one that promoted the SMI or the one that launched measures to help the sectors affected by "Putin's war" and that are going to be extended with the announced vote against the opposition, he pointed out.

A way of governing, Sánchez continued, "more equitable and effective" than the one the PP had because when they had to deal with the financial crisis of 2008, "there were cuts, wages were devalued and workers were fired."

But in addition to responding to the pandemic and the war, the secretary general has affirmed, they have made progress in the reforms that the country needs, such as education, vocational training, the law of dignified death or equal pay. "These are reforms that must be done now and us because they spent seven years (the PP) without doing anything."