Mónica Oltra, accused of allegedly covering up her ex-husband's abuse of a minor under guardianship

The vice president of the Valencian government has been cited as being investigated and the president, Ximo Puig, only states that he asks for "respect for justice". 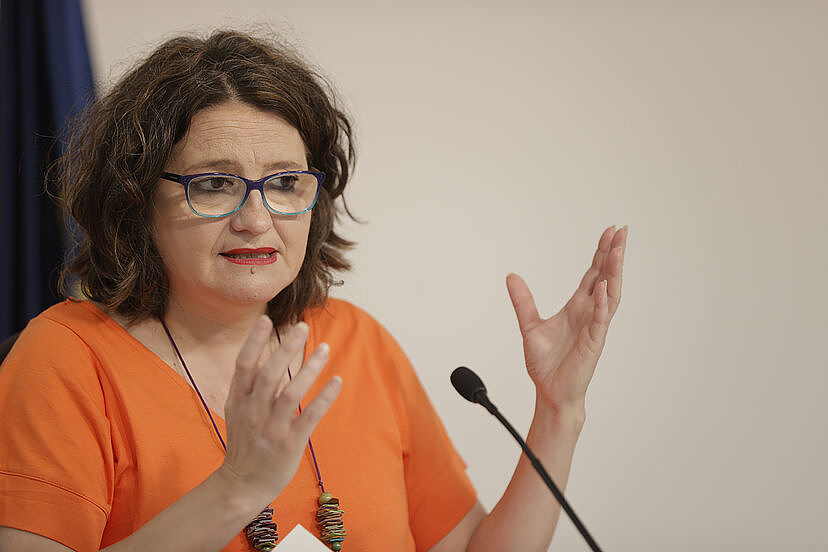 The vice president of the Valencian government has been cited as being investigated and the president, Ximo Puig, only states that he asks for "respect for justice".

The Civil and Criminal Chamber of the Superior Court of Justice of the Valencian Community (Tsjcv) has summoned the Vice President of the Valencian Government, Mónica Oltra, to testify as an investigator on July 6 for the management of the case of abuse of a minor protected by her ex-husband.

The Civil and Criminal Chamber declares itself competent to instruct the case against the also Minister of Equality and Inclusive Policies and thirteen others investigated after the reasoned statement sent by the Investigating Court number 15 of Valencia.

This decision leaves the vice president in a position that, according to many, voices claim, she should put her position at the disposal of the regional president, because she is involved in the case. The president of the Generalitat, Ximo Puig, has learned the news during a meeting with businessmen and at the exit he has not been clear about his position. He has asked for "respect for Justice and its procedures" and "willingness to clarify and make the decision that is fairest."

Asked if he believes that it affects the stability of the Valencian government, he has indicated that "not at all" because it is a "one-off issue" in a context in which the Valencian Community has "gone from a bad reputation to a positive moment", reports Europe Press.

The Court appreciates "a series of plural indications" that "lead to suspect the possible existence of a concert" between Oltra and various officials to "protect her then-partner or protect the political career of the aforesaid".

According to an order dated this Thursday, it is considered that the different procedures and files carried out within the Ministry, "considered in the abstract and in an isolated manner, cannot be understood as illegal and even irregular," reports Eph.

However, he believes that if they are valued as a whole, "putting them in relation to their content and their opportunity", it suggests that they have been prepared "with a very specific purpose" and "of a very dubious legality", such as "benefiting the procedural situation of the -then- husband of Oltra, or simply trying to protect her political career, even when this was done to the detriment of a minor protected by the Ministry of Equality".

He acknowledges that it is true that "there is no direct evidence linking these unique procedures with the appraised person", but he believes that there are "plural indications, which in principle suggest that they were orchestrated precisely for that purpose, both by the person whom They would directly benefit from the relationship they present with the evolution of the criminal process that they tried to hinder.

And it affirms that "it is peacefully admitted by our jurisprudence, both of our Supreme Court and of our Constitutional Court, that this type of evidence is perfectly admissible to distort the presumption of innocence of a person."

To this must be added, according to the court, the public statements made by Oltra, both within Les Corts and before the media, in which the order for the initiation of the reserved file is attributed, of which, according to he says, it may now be a matter of disassociating, "but that does not mean that it is no longer an element to consider."

He also considers it "incredible" that they found out about the abuses and the possible accusation of who turned out to be Oltra's husband by the press, when the vice president herself said that "for a desire for transparency, at the beginning of her mandate she communicated in the Conselleria , both orally and in writing, your relationship" with this person and your work as an educator.

For the court, this "also leads to suspicion that contrary to what was stated, she knew these facts from the beginning, either by communication from one of her subordinates, or simply by telling her husband, with whom we do not forget at that time she lived".

The Civil and Criminal Chamber recognizes that the sentence that condemns Oltra's ex-husband "currently hangs on an appeal" before the Supreme Court, but believes that this will not "prevent him from assessing the crimes charged by the Public Prosecutor's Office, since ultimately it simply refers to preventing an investigation and not giving the minor the due protection that their particular position imposed on them".

In this sense, he understands that it is appropriate to initiate preliminary proceedings, of which the rapporteur of this resolution, magistrate Antonio Ferrer, will be the instructor, "in order to investigate to what extent that initial suspicion has sufficient entity to allow the process can continue its normal course"

‹ ›
Keywords:
ValenciaComunidad ValencianaPolíticaMónica OltraXimo Puig
Your comment has been forwarded to the administrator for approval.×
Warning! Will constitute a criminal offense, illegal, threatening, offensive, insulting and swearing, derogatory, defamatory, vulgar, pornographic, indecent, personality rights, damaging or similar nature in the nature of all kinds of financial content, legal, criminal and administrative responsibility for the content of the sender member / members are belong.
Related News