Juanma Moreno: "The only way is the center and the useful vote"

The Popular Party's candidate for re-election as president of the Andalusian Government, Juanma Moreno, defended today that the "centre" is the "road of reference" and the "great road" that his party "must travel" in order to "block to Vox". 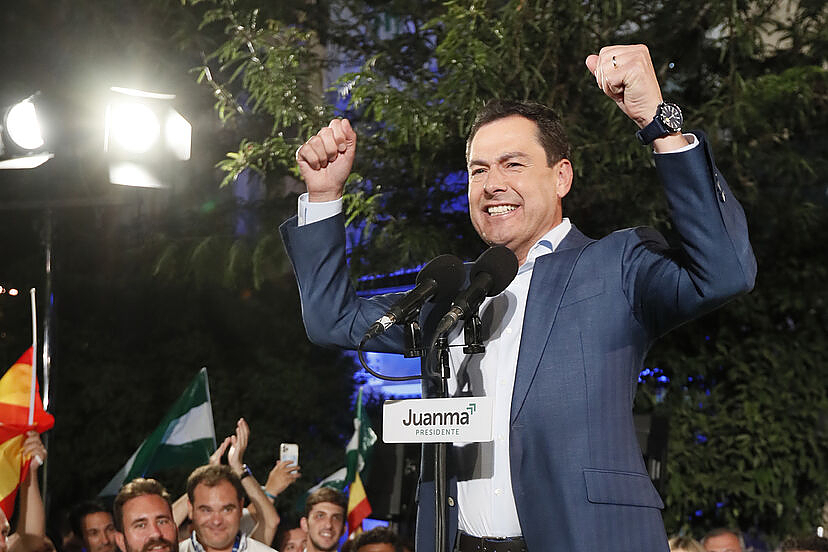 The Popular Party's candidate for re-election as president of the Andalusian Government, Juanma Moreno, defended today that the "centre" is the "road of reference" and the "great road" that his party "must travel" in order to "block to Vox".

Moreno has celebrated in an interview with the SER chain the absolute majority in the elections that were held this Sunday, where the PP won 58 seats in the Andalusian Parliament. With this number of deputies he fulfills his aspirations and will be able to govern alone.

Moreno "was convinced" that he was not going to need to put Vox in the Junta de Andalucía to govern because the formation led by Santiago Abascal would have had a very difficult time explaining to his voters an electoral repetition "out of national pride."

"Many things are said in the campaign," Moreno said, and he assures that "he would endure until the last circumstances" if Vox had blocked the formation of the regional Executive. Moreno knows if Vox "has reached the ceiling", but he does interpret its electoral results as a "setback": the useful vote has been "very powerful", he points out, in addition to the feeling of belonging to Andalusia and the defense of self-government, a "reality social" that "collided" with the speech of the Vox candidate, Macarena Olona.

Moreno has recognized that the PP was wrong in Pablo Casado's stage when trying to stop Vox by copying his speech: "You cannot be aware of the rearview mirror, of what Vox does. We are a project, we cannot be aware of what they do. The path through the center has a very wide track that is the one we have to take. Pablo Casado took a path to plug which, obviously, was not the best in the end", he pointed out.

When comparing his position regarding Vox with that adopted by the president of the Community of Madrid, Isabel Díaz-Ayuso, Moreno emphasizes that the sociology of both communities is "completely different" and that "each teacher has his booklet." "My speech would not fit in Madrid and Isabel's, the same, would not fit in Andalusia", she has pointed out in this regard.

Moreno thanked the leader of the PP, Alberto Núñez Feijóo, for his ability to "know how to interpret and make things easy" as regional president, which he has been until just a month and a half ago.

"He has made this campaign very easy. He has not put a snag. Alberto perfectly interprets the plural and diverse Spain in which we live, and that interpretation is going to make him president of Spain," he predicts.

Moreno has also pointed out that there have been "very valid" people from Ciudadanos in the "second and third levels" of the previous regional government, and he plans to "incorporate independents without any problem" in his new executive.

"I have not proposed anything because it is premature," and he recalls that he proposed to the acting vice president of the Andalusian Government, Juan Marín, as well as five councilors from the orange party, to join the PP list. But Ciudadanos ruled out this option, an "error in the integration process," according to Moreno. "Citizens Walk Toward Extinction".

"My government will be plural, managerial and effective. I will not look at ideologies or origins. I would incorporate independents without any problem," said Moreno, who said that Marín is "a person who can contribute things" and for whom he has "personal appreciation." "But not only him. There are very valid ones in the second and third levels of the administration," she concluded.