Inflation rises to 10.5% in August due to the rise in energy and fresh food 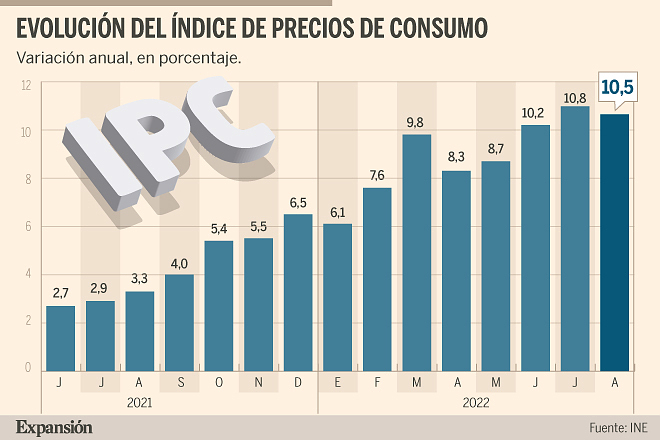 Year-on-year inflation finally stood at 10.5% last month, one tenth more than the advance figure and three tenths below that of July. The rise in prices is above two digits for another month, driven by the cost of energy and, to a lesser extent, of fresh products, restaurants and tourist packages. Compared to last month, prices have risen 0.3%.

The indicator has not dropped below 10 points for months, far from the 2% that the European Union (EU) considers desirable. It finally moderated three tenths compared to July, pulling down on all transport, with a rate of 11.5%, four and a half points lower than that of the previous month, due to the lower price of fuels and lubricants compared to the rise August 2021, says the INE. But, despite the fact that fuel prices have fallen, housing, which increased by 3.6%, is the component that pushes the August data the most, while the rise in fresh food continues.

Core inflation, which excludes from the statistics the evolution of the most volatile prices of unprocessed food and energy products, rises four tenths to 6.4%, the highest since January 1993, and places its difference with that of the General CPI in more than four points.

The Harmonized Consumer Price Index (IPCA), for its part, remained at 10.5% year-on-year, two tenths more than the advance data.

In August, what has become more expensive compared to the same month last year is the housing group (invoices associated with housing, not the price of housing itself, mainly the electricity and gas bill). The group of housing expenses rises 24.8% compared to last year.

Food and non-alcoholic beverages rose by 13.8% in the interannual rate, also above the general CPI and three tenths more than last month, its highest rate since the beginning of the series prepared by the INE, in January 1994 Milk, cheese and eggs are especially expensive, to which is added meat and bread and cereals.

The inter-monthly CPI (August prices compared to July prices) stands at 0.3%, a rise also attributed mainly to housing, which rises 3.6% also due to the electricity bill, since instead, it lowers the gas bill. To housing expenses are added those of food and non-alcoholic beverages: everything goes up in a month, especially milk, cheese and eggs, meat, bread and cereals, and legumes and vegetables, except for fruits, which go down .

Leisure and culture are also more expensive due to the increase in tourist packages, to which are added the prices of hotels, cafes and restaurants. Bala, on the other hand, transport 3.7% due to the drop in fuel and lubricant prices. points out the INE. The prices of clothing and footwear also fell (-0.6%) due to the end of the summer sales campaign.

The CPI at Constant Taxes (CPI-IC), an indicator that has been included in the statistics since 2012, and which measures how prices would have evolved if indirect taxes such as VAT had not been modified, stands at 11.2%, seven tenths above that registered by the general CPI. The monthly variation rate of the IPC-IC is 0.3%. For its part, the IPCA at Constant Taxes (IPCA-IC) presents an annual rate of 11.2%, seven tenths more than that of the IPCA, and the monthly rate of 0.3%.

Considering the territorial distribution, the annual rate of the CPI moderates in August compared to July in 13 of the 17 autonomous communities, increases in two and remains stable in the remaining two. The greatest decreases occurred in Castilla-La Mancha, with a decrease of 0.6 points, and in Asturias and Galicia, with decreases of 0.5 points in both autonomies. The increases occurred in the Balearic Islands and the Canary Islands, with rises of 0.4 and 0.1 points, respectively.

Compared to July, compared to the decreases of 0.1% in Castilla-La Mancha and Navarra, prices rose more in the Balearic Islands (0.7%) and the Canary Islands (0.6%), they remained the same in Madrid (0. 0%) and grew less in Castilla y León and Galicia (0.1%).

In the first eight months of the year, the most inflationary community continues to be Castilla-La Mancha, which in any case drops one tenth to 7.3%, followed by Castilla y León (6.7%) and Extremadura and Galicia (6 .6%), while Madrid remains at 5.1% and the Canary Islands rise to 5.3%.