Inflation moderates to 8.9% in September, but food prices are at record highs

The National Statistics Institute (INE) has published the definitive data for the consumer price index (CPI) for September, which moderated to 8. 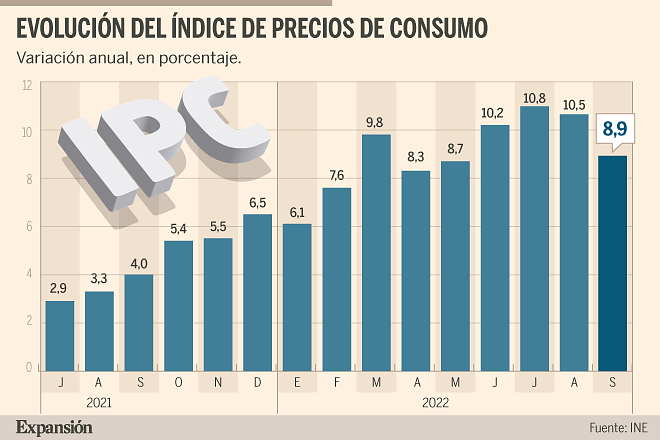 The National Statistics Institute (INE) has published the definitive data for the consumer price index (CPI) for September, which moderated to 8.9% year-on-year, 1.6 points less than the rate for August.

The body has thus lowered the data that it advanced at the end of last month, when it estimated a CPI of 9%. The anticipated monthly decline has also improved by one tenth, from -0.6% to -0.7%.

The September data is 1.9 points lower than the July highs - a level not seen since September 1984 - and is also the steepest decline in a ninth month of the year since the beginning of the historical series in 1961.

With this moderation of 1.6 points, inflation adds two consecutive months of declines in its year-on-year rate after falling three tenths in August, to 10.5%.

According to the INE, the moderation in the year-on-year CPI to 8.9% is mainly due to the drop in electricity and fuel prices. In fact, the housing group moderated its interannual rate by more than 10.5 points, down to 14.2%, due to lower electricity prices.

For its part, the transport group cut its interannual rate by more than two points, to 9.4%, due to the lower cost of fuel and transport services.

At the opposite extreme, food prices rose again in September. Its rate increased six tenths, to 14.4%, the highest since the beginning of the series, in January 1994. Particularly noteworthy is the increase in the price of legumes and vegetables, meat, and milk, cheese and the eggs.

Without taking into account the reduction of the special tax on electricity and the variations on other taxes, the interannual CPI reached 9.3% in September, four tenths above the general rate of 8.9%. This is reflected in the CPI at constant taxes that the INE also publishes within the framework of this statistic.

In monthly terms (September over August), the CPI registered a decrease of seven tenths, its biggest monthly decline since July 2021, when it fell eight tenths.

Compared to other Septembers, the decline in the CPI in September this year is the most pronounced in this month since the beginning of the historical series, in 1961.

In the ninth month of 2022, the Harmonized Consumer Price Index (IPCA) placed its interannual rate at 9%, one and a half points lower than that registered in the previous month. For its part, the monthly variation of the IPCA registered a decrease of two tenths.

The Government hopes that prices will continue to be contained in the coming months despite the tensions in the energy markets. The General Council of Economists forecasts that the CPI will stand at an average of 4% in 2023 and this year it will close around 8.5% in a downward trend supported by the evolution of the downward price of raw materials.