Inflation moderates in October to 7.3% but food prices become 15.3% 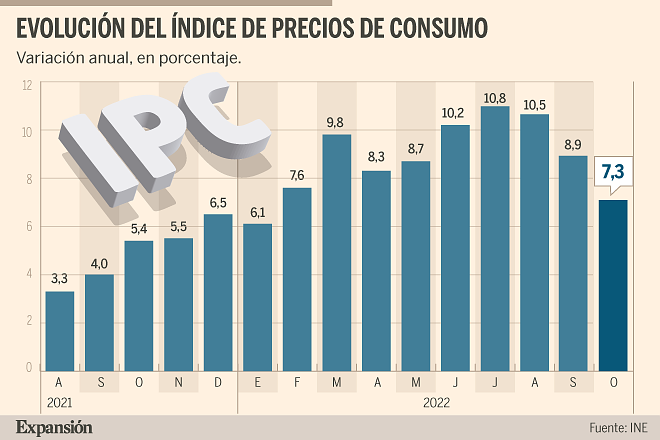 The Consumer Price Index (CPI) suddenly cut its interannual rate by 1.6 points, to 7.3%, its lowest figure since January, just before war was declared in Ukraine, when the CPI stood at 6.1%, according to the definitive data published today by the National Institute of Statistics (INE).

Therefore, the interannual figure of 7.3% that advanced at the end of last month is maintained, but it falls one tenth with respect to the advance data of the monthly advance of the CPI, from 0.4% to 0.3%.

The annual rate of core inflation, which does not take into account the more volatile evolution of energy and fresh food, remains at 6.2% and the Harmonized Index of Consumer Prices (IPCA) also remains at 7 ,3%

Inflation has moderated for three months in a row with the drop in energy prices, especially electricity, and to a lesser extent gas, although the rise in food prices renewed records by shooting up one point to 15.4%.

Compared to October last year, energy, especially electricity, has become 2.6% more expensive: the moderation in annual inflation of energy prices compared to the same month in 2021 has allowed the general rate of the CPI to moderate more than 11 and a half points, as this component is the one that most influences the evolution of prices.

Thus, the group that has dropped the most has been housing (housing costs, not the price of housing itself, in which the electricity bill weighs especially, and to a lesser extent, the of gas gas).

In second place, the clothing and footwear group also moderated two and a half points to an annual rate of 1.4%, since the increase in prices due to the start of the new season is more moderate than in October 2021; that is to say, the prices of the autumn-winter season have not risen as much as last year.

For its part, the group with the greatest positive influence on the general CPI in October was that of food and non-alcoholic beverages, which placed its rate at 15.4%, more than one point compared to last month, and the most high since the beginning of the series, in January 1994. The price of legumes and vegetables, milk, cheese and eggs and meat is striking above all.

After the shopping basket, the clothing and footwear group became more expensive by 8.5%, which reflects the behavior of prices at the beginning of the autumn-winter season. Transport rose 1.4% due to the increase in the prices of fuels and lubricants. Housing costs recorded a rise of 6.6%, as a result of the drop in electricity and gas prices compared to September.