Inflation eases to 6.8% in November but the shopping basket becomes half a point more expensive in a month

The Consumer Price Index (CPI) eased in November to 6. 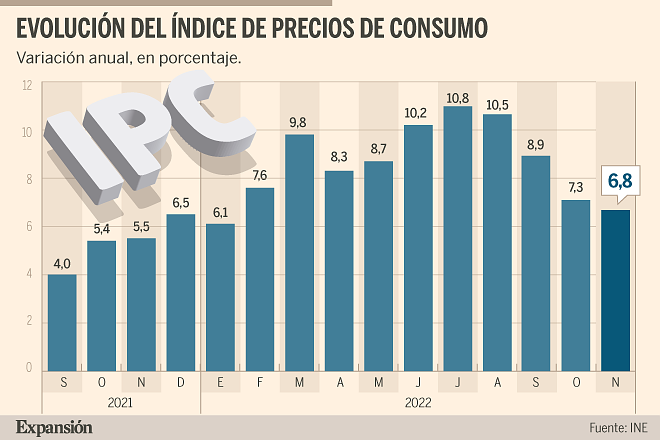 The Consumer Price Index (CPI) eased in November to 6.8%, according to the final data published today by the National Statistics Institute (INE), half a point less than the October data and the fourth consecutive drop. Subjacent inflation rises one tenth to 6.3%, thus closing the gap with the general CPI and remaining five tenths away. The Harmonized Consumer Price Index (IPCA), which is the one used by the European statistical office, Eurostat, to make averages between countries, places its annual rate at 6.7%, six tenths less.

The indicator moderates again due to the drop in the price of electricity and gas to a lesser extent compared to the same month in 2021, although food prices continue to skyrocket compared to a year ago. The inflation rate stands at six tenths of the minimum of January 2022 (6.1%), although as of today food prices remain at all-time highs, with some doubling average inflation and in one month they become half more expensive plus point.

The consumer groups that have most influenced the moderation of the general CPI (the average of all registered prices) are housing (expenses associated with housing, not the price of housing itself), whose main component is the bill of the light. This group moderated by more than one and a half points to 1.0% due to the lower price of electricity, higher than in November 2021, and of diesel for heating, compared to the increase of the previous year.

Next, spending on transport, the second group that has the most influence on the evolution of prices, moderated one point to 7.7% due to cheaper fuel and lubricants, which rose in November 2021. Clothing and footwear, with a rate of 0.0%, it falls almost a point and a half compared to the previous month because the prices for the new season ticket do not rise as much as they did a year ago. Finally, the hotel industry -hotels, bars and restaurants- rose 7.6% compared to a year ago, but it is three tenths below that registered in October due to the lower prices of accommodation services compared to November of 2021.

regions, especially in the Balearic Islands, Navarra, Aragon and Asturias, while moderation is hardly noticeable in the Canary Islands, Galicia, Extremadura and Castilla y León.

Compared to a month ago, prices fell 0.1% due to the moderation of housing expenses, especially electricity and gas (-3.5%). Going to hotels, cafes and restaurants becomes 0.3% cheaper as accommodation falls, which offsets the rise in restaurant prices. In month-on-month comparison, clothing and footwear (3.3%) increased due to the start of the autumn-winter season and food items rose again (0.5%), especially dairy products and eggs, oils and fat and meat.

Thus, what has risen the most when making a purchase in November compared to October has been oil (6.4%); milk, cheese and eggs, which recorded 3.3%, fish and shellfish (1.4%) and breads and cereals (1%). Non-alcoholic beverages such as mineral water, soft drinks, fruit and vegetable juices also rose (2.2%); as well as sweets -sugar, preserves, honey, chocolate and confectionery (1.7%)- and other food products (soups and broths, caramel and artificial honey and perishable preparations, such as sandwiches or unbaked pizzas), which rose by 1.6%

With the advance data of the CPI for November, it is already possible to anticipate how much the contributory pensions and the Minimum Vital Income (IMV) will revalue next year. Contributory pensions will rise by around 8.5% in 2023, according to the result obtained from the revaluation formula included in the pension reform law whose reference to determine the increase in these benefits is the average interannual CPI of twelve months (from December of the previous year to November of the current year). The cost for public coffers of revaluing pensions by this percentage will exceed 12,700 million euros.

Non-contributory pensions will maintain the 15% increase that was applied to them last July by virtue of an amendment approved during the budget negotiation.

The 2023 General State Budget (PGE) did not contemplate the specific figure by which contributory pensions will rise next year because the inflation data to which their revaluation is linked was unknown, although the Government estimated that it would be at 8 ,5%.