Town of Zujar uses the occasion of the 77th anniversary the liberation from Mauthausen Nazi concentration camp to pay simple tribute to five of its neighbors who were sent to Nazi extermination camps. 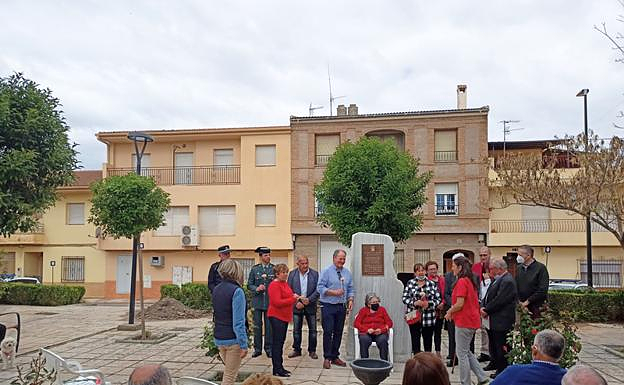 Town of Zujar uses the occasion of the 77th anniversary the liberation from Mauthausen Nazi concentration camp to pay simple tribute to five of its neighbors who were sent to Nazi extermination camps. A monolith will be erected in Los Nogales with the names of the victims in bronze. Five trees and five trees will also be placed in their honor. From Mathausen, Gusen, Dachau.

Jose Fernandez Ibanez continued to work and took all necessary steps to ensure that his relatives, along with his colleagues from Zujar, who had been so cruelly murdered, could be officially registered as dead on their land. Manuela Fernandez said that yesterday's closing of the circle was possible and the families could enjoy a little more peace.

The act saw the planting of four walnut trees as well as a laurel and maple tree, and the discovery of a monolith in honor and memory to these neighbors who were forgotten but have had their memories redeemed. Carmen Fernandez Gomez (professor and relative of victims), Antonio Segovia Ganivet (professor and researcher at the Department of Contemporary History of University of Granada), addressed the event and explained how the historical framework of Democratic Memory and of Victims of Nazism was designed to make the Zujarenos' experiences more easily understandable and remembered. Juan Marin Hernandez, a writer and expert researcher about the Spanish deportees, described the steps and the suffering of the honorees using precise data, and contrasted it with an extensive and thorough review of documentation. Jose Fernandez Ibanez (amateur and family poet) read an emotional poem to all deported Zujarenos. Maria Cabeza Sanchez Hernandez listened to a heartbreaking letter that touched the heart and showed the unhappiness families have experienced. Manuela Fernandez Gomez (great-niece) of the honored offered the final echoes of the voices and a summary the oath made by the survivors after liberation of Mathausen camp.

Salvador Moreno (the mayor of Zujar) and the coordinator of the act, Salvador Moreno, both point out that the tribute is meant to bring attention and acknowledge the suffering of these five Zujarenos. They are only a small portion of approximately 7,000 Spaniards who were killed at the hands Nazis. They were subjected to subhuman conditions, from the gas ovens to horrific medical experiments to the innumerable, unjust, and atrocious sufferings they endured. This was all done in extermination camps. It has been ignored and silenced for many decades.

I sing for peace

"Today, more than ever, we must speak out about the social conscience and commitment of these people despite the horrible suffering they suffered and the unjust silence and oblivion for which they were condemned for many years. It is important that we remember the lives of these young neighbors, whose lives were cut short in such a terrible way. It is important to remember that, behind the figures that seem to speak nothing, there may be stories, lives, frustrated dreams, and family members... May their suffering, death, and struggle for justice serve to remind us of history and prevent it becoming repeat. That peace reigns in our homes, our communities, and ultimately in the entire world. He concluded by saying Manuela Fernandez Gomez.

‹ ›
Keywords:
ZujarRealizaEmotivoHomenajeCincoVecinosMuertosCamposExterminioNazi
Your comment has been forwarded to the administrator for approval.×
Warning! Will constitute a criminal offense, illegal, threatening, offensive, insulting and swearing, derogatory, defamatory, vulgar, pornographic, indecent, personality rights, damaging or similar nature in the nature of all kinds of financial content, legal, criminal and administrative responsibility for the content of the sender member / members are belong.
Related News