"You are a war criminal, we will accuse you and we are looking for you with an arrest warrant!"

Today is the 225th day of the war in Ukraine, which Russia started on February 24 with a military invasion. 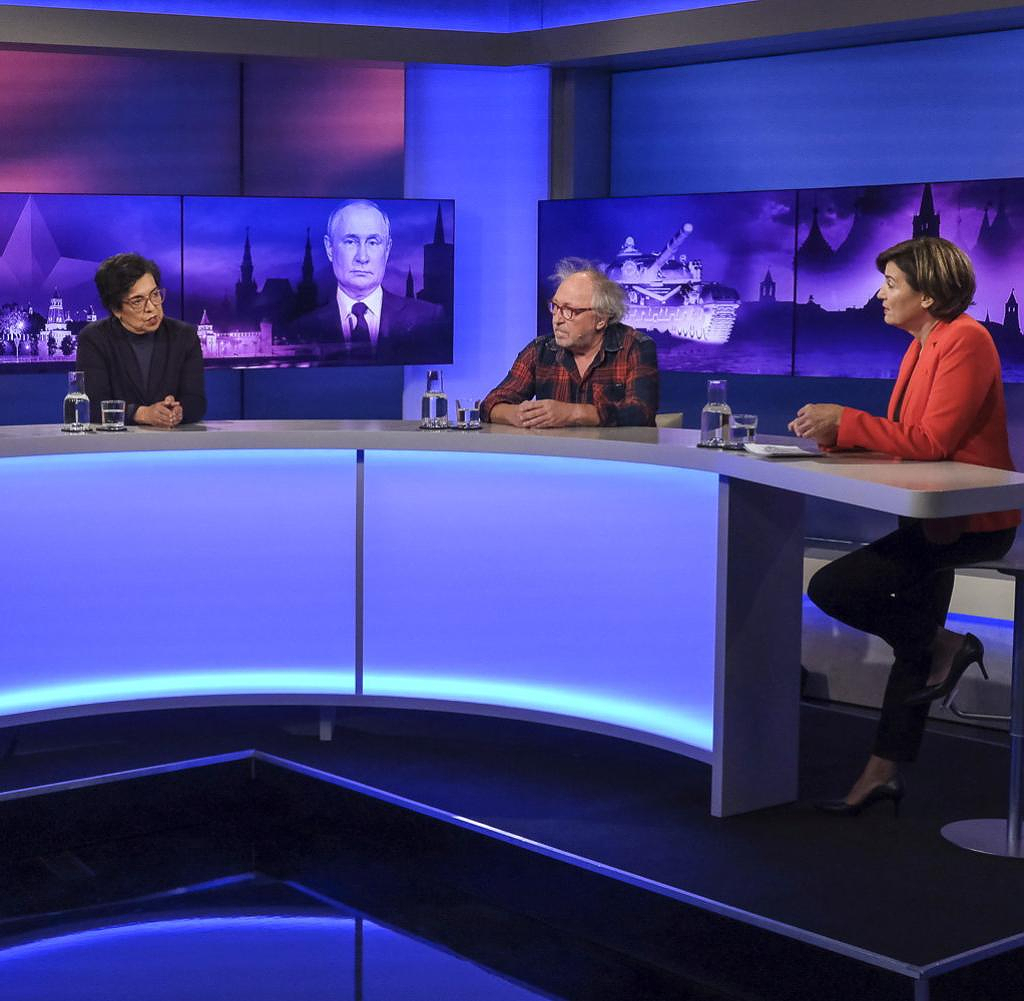 Today is the 225th day of the war in Ukraine, which Russia started on February 24 with a military invasion. In the first two months after the war began alone, the attackers made 20 nuclear threats, journalist Mariam Lau told Maischberger. "You're a bit jaded now." Nevertheless, you still have to worry and insist on peace negotiations.

How things could continue in the Russia-Ukraine war and what position the West should take was the topic of the ARD political talk on Wednesday evening. The members of the Bundestag Amira Mohamed Ali (left) and Norbert Röttgen (CDU) delivered a violent exchange of blows.

The 89-year-old former Interior Minister Gerhart Baum gave his assessment of the current situation in Eastern Europe. He explained impressively why he had filed a criminal complaint against Vladimir Putin, although this had little prospect of consequences for the Russian president.

The journalists Gregor Peter Schmitz (Stern editor-in-chief), Mariam Lau (Zeit correspondent) and the cabaret artist Urban Priol discussed arms deliveries and other possible interventions by the West in the Russian war of aggression.

Despite the saber-rattling, Lau considers the probability of a nuclear attack to be low. Germany should continue to support Ukraine with weapons. "In order to protect the soldiers and reverse the illegal annexations under international law, Ukraine needs tanks," said the journalist.

"They give the chance for peace," countered CDU foreign politician Röttgen. “Military self-defense is good and right. With every square meter that Putin no longer has in Ukraine, fewer people are killed or women are raped.” The war must be driven out of Europe.

"The gains in territory are not a sign that Russia is losing the war," said Mohamed Ali. The war will probably go on for a long time. "I think it is an illusion to believe that Russia can be defeated militarily. I think a victory peace is unrealistic and it will only lead to more deaths.”

Röttgen sees things differently. “In about five days, the Ukrainians recaptured the Russian conquests of the last five months. They want to defend their country and they do it with great and successful effort," he said. The West must support this.

There are currently no peace negotiations between the states. "What else is there to negotiate? There is currently no basis for that," said Mariam Lau. “When do I go to the negotiating table? Then when I have nothing left to achieve on the battlefield. That can only happen for the Russians if nothing succeeds in the annexation.”

"The first thing to do is negotiate a ceasefire," said Mohamed Ali. There have already been small negotiation successes in the past few months, for example with grain deliveries. “That was Turkish President Erdogan. If he can do that, I think the EU could also achieve something if it acts sensibly.”

Is the EU blocking the will to negotiate? "It's completely absurd and there's no factual basis for what you're saying," Röttgen accused the left. The Russian President is ruining his own country. "Putin is at war and wants war." So you have to focus on how to create peace: "The solution is to defeat the war."

“Then you would have to go in and wage war on Putin and corner him. That would be the conclusion of what they say," Ali said. But if NATO were to intervene, World War III would ensue. Röttgen didn't want to go that far. “We don't support them consistently enough. We should do everything but enter the war ourselves.” NATO, and especially the US, should stick to the principle of deterrence.

Amira Mohamed Ali criticized western economic sanctions. "They have bad effects on the German and European economy." There is no indication that the Russian economy would be severely damaged by the sanctions. Is the federal government to blame for the high gas prices, Maischberger asked. Mohamed Ali: "One reason for the price increases in energy costs are the sanctions, so I think they are wrong." Röttgen firmly rejected this: "The war is the cause of the economic consequences and the gas was turned off by Putin, not by us .”

The former Interior Minister Gerhart Baum (FDP) witnessed the Second World War as a child, helped shape the development of the Federal Republic and as a politician shaped political life in Germany for almost 50 years. He says: "It is one of the most serious crises." The effects of the Russian-Ukrainian war are felt worldwide.

“Putin pushed away the charter of nations as a permanent member of the UN Security Council. I've never experienced anything like it before.” He advocates rebuilding the world order. "For this, the Europeans should talk to countries like India and South Africa and consider how to build this new order."

Baum was with Maischberger in March and predicted at the time that the war could last more than a year. “Putin is not all of Russia. There is also the other Russia,” he said now. So there was not only Nazi Germany, but also the Germany that rebuilt the country after the war. "You have to stop just seeing Putin Russia."

Russia should not be given up. "I think it's absolutely arrogant to say that the Russians are incapable of democracy. I think everyone is free. We are all born free.”

Russia must be persuaded to distance itself from its "aggressive imperialism". If Putin is not prepared to do this and if he continues to endanger freedom, one must also be prepared to wage war against the regime. "Yes, you have to. There is no alternative,” said the lawyer. “We must not be in the situation again like after Crimea, where we close our eyes. And at some point we are surprised by new aggressiveness. That will not do."

A situation must be created in which Russia can flourish again. “But the people there are totally oppressed. Anyone who protests for peace is considered a terrorist,” said Baum.

Shortly before his 90th birthday, the former politician sued Vladimir Putin. Will this work? "It will be difficult with Putin as long as he is in office," he admits with a smile. Nevertheless, one must take action against injustice. "You can't punish him here, but we can give him a signal: you're a war criminal, we'll charge you and we'll have an arrest warrant for you! Let's use our own German law."

‹ ›
Keywords:
TVKritikMaischbergerSandraNewsteamNorbert RöttgenPolitikGerhart BaumKriegFriedensverhandlungPeter SchmitzWladimir PutinRusslandMariam LauSandra MaischbergerCDUUrban PriolUkraineWaffenlieferungAmira Mohamed Ali
Your comment has been forwarded to the administrator for approval.×
Warning! Will constitute a criminal offense, illegal, threatening, offensive, insulting and swearing, derogatory, defamatory, vulgar, pornographic, indecent, personality rights, damaging or similar nature in the nature of all kinds of financial content, legal, criminal and administrative responsibility for the content of the sender member / members are belong.
Related News