Yesterday night, the prestigious Byzantine Accademia of Ravenna starred as the star in a monograph about Vivaldi

The 34th 'Ciudad de Ubeda" International Music and Dance Festival presented last night a journey through Baroque sounds thanks to the performance by the Accademia Bizantina, a prestigious and experienced formation, founded in Ravenna in 1983 and who has performed at some of the most renowned festivals and theaters in the world. 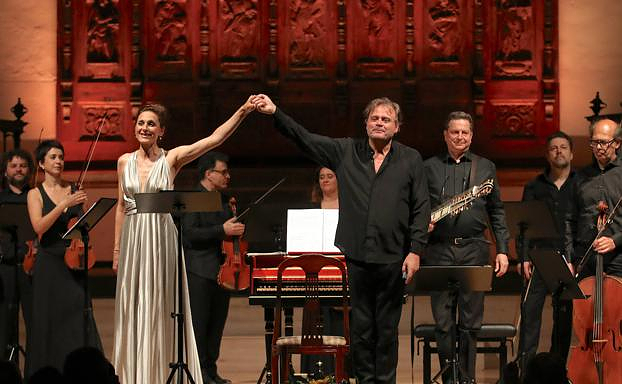 The 34th 'Ciudad de Ubeda" International Music and Dance Festival presented last night a journey through Baroque sounds thanks to the performance by the Accademia Bizantina, a prestigious and experienced formation, founded in Ravenna in 1983 and who has performed at some of the most renowned festivals and theaters in the world. He came to the Hospital de Santiago's auditorium to perform a Vivaldi monograph with just his violin and voice, echoing the success in Madrid. It was a true treat for all who attended, and they were able enjoy every note.

It is this extraordinary interpretative quality that the Byzantine Academy has. It begins with the Baroque stylistic rules, and it explores them without changing, adding or eliminating. It was also nominated last year for Europe's best baroque orchestra.

Ottavio Dantone was the conductor. He is a true expert on these expressive codes and a deep connoisseur about the performance practice during the Baroque period. This has made the Accademia byzantina in Ravenna one of the most well-known ensembles of baroque musical instruments, and accredited on an international stage. Participating was also the renowned contralto Delphine Galou, who specializes in that period's repertoire. Alessandro Tampieri was the first violinist and concertmaster.

On Thursday, Alberto de Paz was the host. He is a famous pianist, improviser and showman, and was runner-up on the television program "Got Talent". His musical comedy, 'Your great soundtrack,' featured music, humor, and improvisation. It was a fun and interactive show. The 'Diego Martinez theater at La Cultural was full for the occasion. It was filled with people who were able to travel back through time using the music of television commercials, programs, and soundtracks from well-known movies. The recital was part of the 'Soundtrack Festival' cycle dedicated to film music.

Julian Rachlin will perform at the Hospital de Santiago today at eight o'clock in the afternoon. He is an international violinist and one of the most prominent artistic personalities of our times. As soloist and director, he will be accompanied by the Madrid Soloists Chamber Orchestra. This is Spain's leading chamber orchestra and has great international projection. Its leader is Gabor Szabo, the Hungarian master violinist. The recital will feature Vivaldi’s The 4 Seasons’ and Bach’s Concerto in D Minor’. It will conclude with 'Divertimento V136' and a 'Symphony No. 29' by Mozart.

Tomorrow, Sunday, will be the end of this second week with the traditional guitar concert at the courtyard of the ‘Casa Mudejar’ Archaeological Museum, Ubeda. This concert is part of the Stage pro cycle, which focuses on emerging artists based upon the agreements the festival has with various entities and competitions. Leonard Becker, the winner of the Andres Segovia’ International Guitar Competition in La Herradura, (Granada), 2021, will perform works by Villa-lobos and Rodrigo. It will begin at 12:30 in the afternoon.

‹ ›
Keywords:
SobrePrestigiosaAccademiaBizantinaRavenaProtagonizoAnocheMonograficoVivaldi
Your comment has been forwarded to the administrator for approval.×
Warning! Will constitute a criminal offense, illegal, threatening, offensive, insulting and swearing, derogatory, defamatory, vulgar, pornographic, indecent, personality rights, damaging or similar nature in the nature of all kinds of financial content, legal, criminal and administrative responsibility for the content of the sender member / members are belong.
Related News