XV of France: facing the Springboks, the thrill of the unknown

When he took alone, in 2020, the controls of the dying Blues, eliminated without glory a few months earlier in the quarter-finals of the World Cup in Japan, Fabien Galthié obtained a preview of the documentary "Chasing the sun" behind the scenes of the Springbok coronation. 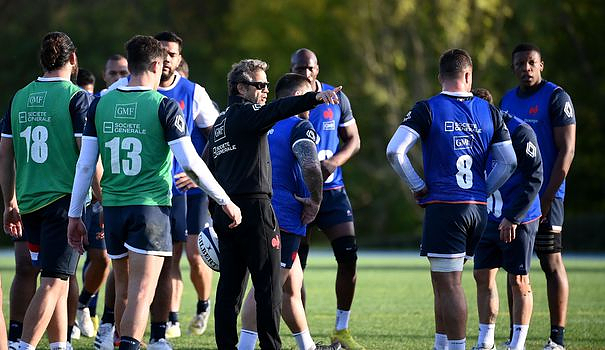 When he took alone, in 2020, the controls of the dying Blues, eliminated without glory a few months earlier in the quarter-finals of the World Cup in Japan, Fabien Galthié obtained a preview of the documentary "Chasing the sun" behind the scenes of the Springbok coronation.

During his first Six Nations Tournament at the helm, he brought together his players every evening in the large auditorium of the national rugby center in Marcoussis to watch the episodes and trace the steps to follow to know the same destiny. four years later.

"South Africa, we love them (...) They moved us, they made us vibrate", says Galthié. "What a magnificent story this team rebuilt around Rassie Erasmus (the coach) in 2018. And all these men who united to seek a world title that no one gave them".

Two and a half years have passed since the nocturnal film sessions and his team, to whom no one then dared to promise the world title as the delay seemed great on the competition, is today one of the main candidates.

She has in turn hung on her hunting board all that is best in world rugby: England from its first match in the Tournament in February 2020, Ireland three times, Australia there and last week at the Stade de France, New Zealand last fall...

Everything, except South Africa, which France has not crossed since 2018 and more beaten since 2009 (7 consecutive defeats).

After the victory snatched from the Wallabies (30-29) and before receiving Japan in Toulouse on Sunday, November 20, this thrill of the unknown gives a special relief to the second of the three autumn tests of the Blues.

They will not only have the opportunity to gauge themselves directly against the world champions, but also to take a psychological advantage over an opponent they could potentially find in the quarter-finals of the World Cup next year.

This gala match in a sold-out Vélodrome stadium, which the French hope is as hot as for the European evenings of Olympique de Marseille, will also be at stake in the current record series of eleven victories.

Antoine Dupont and his band, undefeated since July 2021, intend to remain so for a little longer. They will have to erase the shortcomings shown against Australia and prepare for the physical challenge that the robust Springboks will inevitably impose on them.

"They are magnificent fighters, players who like to move forward, who have that in their DNA", greets Galthié. "We have great respect for them, for what they have done and what they are doing. This meeting for us is wonderful, sublime".

The coach, in the name of "collective experience", did not touch his starting XV, even if the center Jonathan Danty, who became the father in the week of a little Gabriel, did not set foot in Marcoussis this week.

Opposite, South Africa, revengeful after their defeat in Ireland (19-16), presents itself with Faf de Klerk as scrum half and a crying deficit of professional openers.

In the absence of injured Handre Pollard, Damian Willemse will play in 10, but the goalscoring role will go to Cheslin Kolbe. The pocket winger will not be too out of place on Saturday, with his current teammate in Toulon Charles Ollivon and seven former Toulouse comrades facing him.