This is the first world title for the 23-year-old Provençale, a great sprint hope since the juniors, and she won it in the queen event: speed. 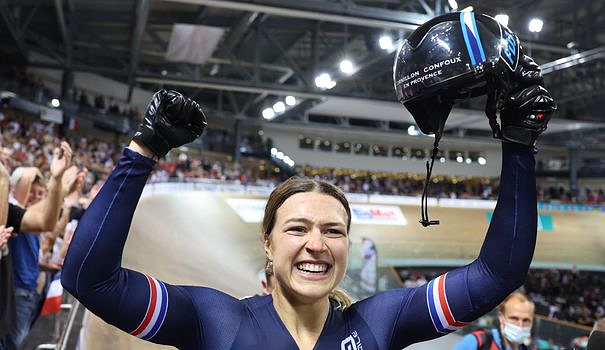 This is the first world title for the 23-year-old Provençale, a great sprint hope since the juniors, and she won it in the queen event: speed.

And this triumph, she did not steal it, after having single-handedly dominated the powerful German team. First, in the semi-finals, by ejecting the double defending champion, Emma Hinze, from the tournament, despite the loss of the first round.

She did it again for the gold by leaving Lea Sophie Friedrich no chance, this time in two straight matches to live the best day of her life on a bike.

Mathilde Gros, born in the Pas-de-Calais but who grew up in the Bouches-du-Rhône, discovered cycling by chance eight years ago when she was an apprentice high-level basketball player and dreamed of baskets at three points.

Gifted, she quickly asserted herself as a great hope of French sport by chaining titles among juniors, some then predicting a destiny for her like Félicia Ballanger, the great lady of French sprinting, triple Olympic champion.

This pressure, she struggled to take it, chaining setbacks after a promising third place at the 2019 Worlds, often for lack of self-confidence.

"I take slaps but one day I will have a click", she said last year after two successive poor performances at the Tokyo Games (9th in individual speed and 13th in keirin) and at the World Championships in Roubaix (9th in the keirin).

The click came on Friday, on the velodrome where she dreams of winning Olympic gold in less than two years and where she knew how to do violence to herself to believe more in herself.

And play eye to eye with the champions she admires, as she showed by defying her opponents with her gaze for long seconds.

"Since his arrival in January, Grégory Baugé has been telling me that basically I do this to have fun and I try to apply that", she said before the Worlds, about the former champion and new coach. national.

A pleasure that she shared on Friday with the public, numerous and overexcited, of the velodrome of Saint-Quentin-en-Yvelines who sang passionate "Mathilde, Mathilde".

He had been warmed up by the beautiful silver medal won earlier in the evening by Melvin Landereau, who was then the second charm for France in these Worlds after the bronze won the day before by the women's pursuit team.

The European champion in the kilometer in August in Munich certainly could not do anything against the overpowering Dutchman Jeffrey Hoogland who retained his title with a margin greater than 1 sec 4/10.

"It's a great performance, he commented. From the start I knew it was going to be very difficult to get him. The goal is to close this 'gap' with him by the Games. We're going back to work to try to join him on this planet."

A planet where the Italian Filippo Ganna also lives, who won a fifth world title in the individual pursuit, a new world record at stake.

The best rider on the planet, however, arrived tired at these Worlds after breaking another record last Saturday, the mythical one for the hour by covering 56.792 kilometers on the track in Granges, Switzerland.

But he was able to find the resources to beat his compatriot Jonathan Milan in the final and enrich his showcase of trophies which also includes two world titles in the road time trial.