On the plane to Doha, the man with seven Ballons d'Or will dream of only one thing, finally winning the supreme trophy on his fifth attempt. 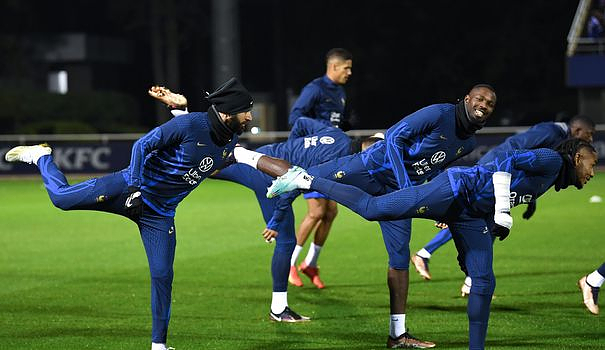 On the plane to Doha, the man with seven Ballons d'Or will dream of only one thing, finally winning the supreme trophy on his fifth attempt... But his young teammate from Paris SG, Kylian Mbappé, does not count let go so easily.

After two days of gathering at the Clairefontaine training center (Yvelines), mainly dedicated to recovery, "Kyky" and the Blues get to the heart of the matter on Wednesday, with this departure for Doha.

As they take off from Le Bourget, shortly after 10:30 a.m., they will no doubt have a fond thought for Nkunku. The current top scorer in Germany celebrated his 25th birthday on Monday with a smile, but it was grimacing that he left his family on Tuesday evening, injured during the final training of the Blues.

The verdict fell late on Tuesday evening: sprained left knee, inevitable package. After Paul Pogba, N'Golo Kanté, Presnel Kimpembe and Mike Maignan, who also threw in the towel, it's a carnage for the world champions.

However, the latter must quickly immerse themselves in their competition.

At the end of the afternoon, they will take up residence at the Al Messila hotel, to the west of the city centre, a five-star haven of peace appreciated by the staff for its tranquility and its green spaces.

No peace of mind, however, for the medical staff, attentive to the recovery of defensive leader Raphaël Varane and Ballon d'Or Karim Benzema, both affected in the thigh to varying degrees.

Injured more seriously, Varane "has good morale and feelings", assured Deschamps on Monday. "We are not going to skip the stages either, but he is supposed to be available for the first match," he warned, hoping to see the defender Thursday in collective training, five days from France-Australia.

The physical state of the troops is not the only hot spot at the start of the rally.

The Blues have worked, on the one hand, on the outlines of the future convention to govern the exploitation of their image rights, a tense subject since last spring.

And they were summoned, on the other hand, to take a position on the controversies surrounding the organizing country, targeted by NGOs on its management of human rights, in particular on the construction sites of the World Cup.

Will the criticisms be extinguished by the commitment made by the Blues on Tuesday to provide financial support to NGOs working "for the protection of human rights", recalling in passing their "attachment" to the "refusal of any form of discrimination"?

Their captain Hugo Lloris told AFP that he wanted to "keep the focus on the game and avoid losing energy with these elements, which unfortunately are not the responsibility" of the players.

And he confirmed, moreover, that he had given up the idea of ​​wearing a captain's armband with colored stripes in Qatar, in favor of inclusion. An initiative launched by several European selections, but for which Fifa has still not given its agreement, four days before the start of the tournament.

Other selections took less tweezers to take a stand.

The American training camp was adorned with a rainbow flag, that of the struggles for the rights of LGBTQ people, while homosexuality is criminalized in the emirate, the first Arab country to organize the World Cup.

Football stars have been playing the game of predictions for a few days.

For Manchester City striker Erling Haaland, who will watch the World Cup on television as Norway fail to qualify, "the favorites should be Brazil, Argentina, France and maybe England".

In Argentina, Leo Messi tempered the unbridled enthusiasm of his compatriots: "We won't be entry champions as the Argentines think". "Brazil, France and England are a bit above the rest," he said.

"La Pulga" and the Albiceleste are expected late Wednesday evening in Doha: they first play a friendly match against the United Arab Emirates, in Abu Dhabi (4:30 p.m., Paris time), before joining Qatar, a few hundred kilometers to the west.

Mbappé, Benzema, Messi... While waiting for Cristiano Ronaldo on Friday and Neymar on Saturday, Qatar is starting to adorn itself with stars.