World: Tunisia on the verge of elimination after defeat against Australia

To still hope to qualify for the round of 16, the "Eagles of Carthage", who have only one point, will have to beat France, the reigning world champion, in their third match, and hope for a favorable situation. 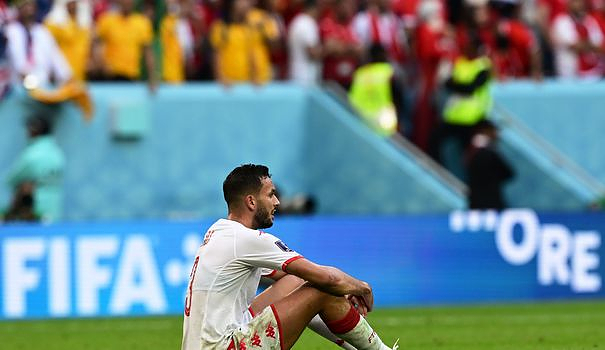 To still hope to qualify for the round of 16, the "Eagles of Carthage", who have only one point, will have to beat France, the reigning world champion, in their third match, and hope for a favorable situation. in the group.

Australia, on the other hand, can continue to dream, since a victory against Denmark would open the doors to the knockout stage.

After 20 soporific first minutes, where Australia monopolized the ball but never brought danger to Aymen Dahmen's goal, the "Socceroos" were the first to find the opening.

On a counter, Mitchell Duke victoriously headed a deep ball from Craig Goodwin, the man who had scored the only Australian goal against France (4-1).

This goal did not really wake up the Tunisians, certainly present in the physical engagement, but long devoid of inspiration when they recovered the ball. It took until the 38th minute to see the first interesting action of the Carthage Eagles, when their captain Youssef Msakni tried to infiltrate the opposing defense, in vain.

The Tunisians, who had shown other qualities at the start of the competition against Denmark (0-0), then had a highlight, with two clear chances: Mohamed Dräger, at the conclusion of a counter, d first forced the Australian goalkeeper Mathew Ryan to a good save (41st), before Msakni, again, found himself in an ideal position for an uncontrolled recovery in front of goal, receiving a cross from Issam Jebali ( 45th 3).

But the captain of the Eagles did not fit, and it was Australia who returned to the locker room with a goal in advance, to the dismay of some 20,000 Tunisian supporters who came to encourage their team, all dressed in red.

The Tunisians returned after the break with much better intentions. Possession, attempted percussion, use of corridors. Everything was there? No, because the efficiency in front of goal was lacking until the end for the North Africans: Jebali got locked in the defense (52nd), Msakni failed on goalkeeper Mathew Ryan, just before attempting a long shot again captured by the Australian goalkeeper (72nd).

Neither Msakni, who at 32 is coming back from injury and has played little for his Qatari club throughout the month of October, nor Montpellier's Wahbi Khazri, who entered late in the game to try to save his team, have managed to make forget the absence at this World Cup of a real Tunisian scorer.

Opposite, the Socceroos played the counters thoroughly to attempt the knockout, and Mathieu Leckie narrowly failed on goalkeeper Aymen Dahmen (71st). But the score did not change. Tunisians will no doubt watch with interest the France-Denmark at 5:00 p.m. If the Blues win, they will already be qualified, and Didier Deschamps could save his executives for the last group match.