World: the stars get off the plane, the expectation rises in Doha

In the wake of the Blues, reigning world champions and Lionel Messi's Albiceleste, who arrived on Wednesday, the World Cup plateau is gradually filling up as landings at Hamad International Airport and installations in the camps basic. 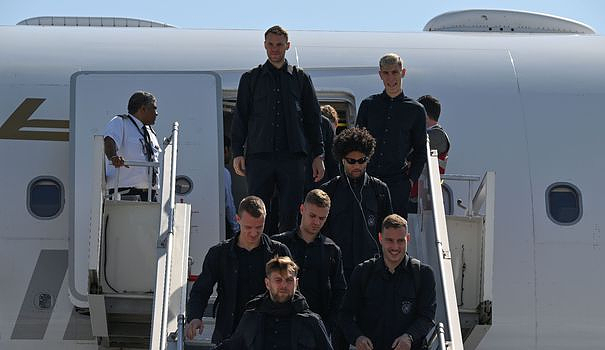 In the wake of the Blues, reigning world champions and Lionel Messi's Albiceleste, who arrived on Wednesday, the World Cup plateau is gradually filling up as landings at Hamad International Airport and installations in the camps basic.

Still missing are Eden Hazard's Belgium and Luka Modric's Croatia, expected on Friday, as is Cristiano Ronaldo's Portugal, retained in Lisbon for a final friendly match against Nigeria on Thursday (7:45 p.m. Paris time), while Brazil from Neymar, in training camp in Turin (Italy), should close the ball on Saturday.

Germany, difficult winner of Oman (1-0) on Wednesday during its final trial gallop, for its part arrived Thursday at midday to take up residence in Al-Ruwais, at the Zulal Wellness Resort, in the northern tip of the peninsula.

As for Spain, which gauges against Jordan in Amman on Thursday evening (7:00 p.m.) before heading for Qatar overnight from Thursday to Friday, it is preparing for a very tough Group E with the poster against the Germans on November 27.

In the meantime, in the shadow of the skyscrapers of Doha, where the faces of the main stars of the tournament are displayed, supporters from all over the world flock to the big global meeting, the first in the Arab world, surrounded by multiple extra-sporting controversies: human rights of migrant workers, the question of discrimination against LGBTQ people, or even the environmental impact of the tournament.

- Doubts about the Blues -

Several dozen fans, most of them residents of Doha from Lebanon, France or India, equipped with flags, jerseys, trumpets and drums, accompanied the installation of the Blues in their base camp at the end of the day on Wednesday. , six days before their start against Australia.

The French approach the tournament shrouded in doubts after a hecatomb of injuries, the latest being Christopher Nkunku (knee), replaced at short notice by Randal Kolo Muani, who joined the squad on Thursday morning. A new setback for the defending champions, threatened by tough competition.

There is of course Brazil, world No.1 in the Fifa rankings, and Argentina, which chained Wednesday in a friendly against the United Arab Emirates a 36th match without defeat, a length of the invincibility record established by the Italy in 2021, with an attacking festival (5-0) including a goal from Lionel Messi and a double from Angel Di Maria.

And behind these leaders, no complex for a skewer of outsiders including the Netherlands, unfortunate triple finalists (1974, 1978, 2010) and eternal candidates for the world title.

- Controversies and scenes of jubilation -

Their coach Louis van Gaal, known for his outspokenness, did not dodge the controversies that accompany the Qatari World Cup. Fans who do not wish to come to Qatar or even follow the 2022 World Cup are "right" if these are their convictions, he said on Wednesday.

Emmanuel Macron, for his part, considered that it was "a very bad idea to politicize sport". "These questions, you have to ask yourself when you attribute the event", launched the French president on the sidelines of a summit in Bangkok, speaking out against a boycott of the event.

Some supporters said they hesitated to go to Qatar, between extra-sporting controversies and the cost of the trip, estimated at several thousand euros for a month.

However, the excitement has begun to dawn around the main fan zone of the World Cup, located in Al Bidda Park, in the center of Doha, which is due to open officially on Saturday, on the eve of the opening match. On Wednesday, during a test event in the evening, volunteers posted at one of its entrances assured that "it was full".

The first scenes of jubilation also appeared for the arrival of players from England, France or Argentina, with many fans, some from the Indian subcontinent, who competed with drums, songs, jerseys and flags.

"False supporters", as some international media have joked in recent days? Not at all, assured the fans interviewed by AFP, considering this suspicion as "degrading and very frustrating".

He also claimed that "3.1 million tickets have been sold", i.e. all the tickets available, and promised an "exceptional tournament".