World: the Blues are already aiming for the eighth, Messi with his back to the wall

Arrived in Qatar with the status of favorite, Argentina and its superstar are on the edge of the precipice: a defeat against Mexico (8:00 p. 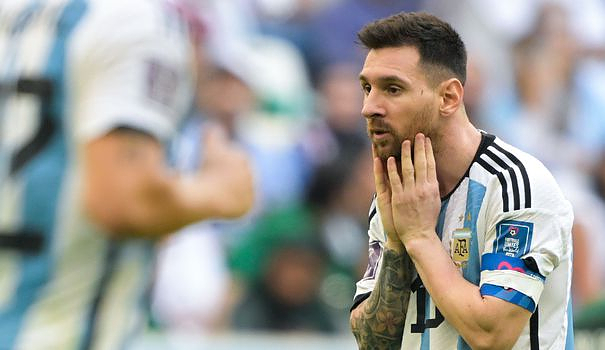 Arrived in Qatar with the status of favorite, Argentina and its superstar are on the edge of the precipice: a defeat against Mexico (8:00 p.m.) would shatter all the dreams of the "Pulga", surprised at the opening by Saudi Arabia (2- 1).

At the heart of this World Cup full of surprises - Germany beaten by Japan, Uruguay and Croatia held in check - the French world champions can be satisfied with having mastered their entry, dominating Tuesday the Australia (4-1).

"We have this possibility of being qualified, but we are not going to see ourselves more beautiful than we are, or put the rooster higher than necessary", warned coach Didier Deschamps.

The Habs will have their ticket for the eighth in case of success against Denmark. A victory combined with a draw for Tunisia against Australia (11:00 am) would even guarantee them first place in their group.

But the stopover at Doha's 974 stadium, recognizable by its brightly colored shipping containers, promises to be hectic. If they do not impose themselves, the Blues will indeed have to win their ticket against Tunisia on Wednesday, with their destiny in hand, of course, but fear in their stomachs.

"If we start looking too far into the competition, we risk having accidents," warned captain Hugo Lloris before facing his club teammate Pierre-Emile Højbjerg and his ex-partner Christian Eriksen, now at Manchester United .

In 2022, the latter broke both twice on the recent semi-finalist of the last Euro: 2-1 at the Stade de France in June with an almost complete "eleven", 2-0 at Parken in Copenhagen in September with a ton of injuries.

Denmark, 10th world nation in the FIFA rankings, is "underrated", recalled Deschamps on Friday. He "made us miseries, a lot of miseries", he continued, before urging his people to "reverse the trend, not to mention revenge".

To break through the Danish wall and its goalkeeper Kasper Schmeichel, "DD" can count on a Mbappé at the top of his game, an Antoine Griezmann who is ever more valuable in defensive balance and an Olivier Giroud driven by the quest for the team goal record. de France, still shared with Thierry Henry after his double against Australia (51 goals).

"Titi, watch out, I'm coming!" launched the center-forward after the entry into the running of the Blues.

Tactically, the French can consider several adjustments. Their vice-captain Raphaël Varane is potentially a candidate for a return to the starting "eleven", a first since his right thigh injury on October 22.

Ousmane Dembélé hopes to chain a second tenure on the right wing, while Benjamin Pavard is balanced with Jules Koundé at the right-back position.

If they win the victory, the Blues will then be able to calmly watch the Argentine match at the Lusail stadium a few minutes after their meeting. And take out their calculators, because a first place for Les Bleus combined with a second place for Albiceleste would reserve a clash between France and Argentina in the round of 16, as in 2018...

Messi supporters, for their part, would sign with both hands for such a scenario, so much do they fear the elimination of their idol from the group stage, a national disaster for what must be the last World Cup of the sevenfold Ballon d 'Gold, 35 years old.

Against all odds and after the relative missteps of the Netherlands and England, Saudi Arabia could become the first nation qualified for the eighth, probably also one of the most unlikely. The Saudis need a win against Robert Lewandowski's Poland (2:00 p.m.).