Uruguay defeated Ghana 2-0 in vain, ahead of South Korea in the standings by the number of goals scored (2 against 4). 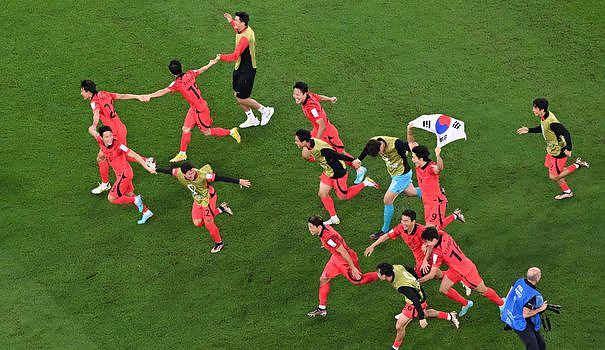 Uruguay defeated Ghana 2-0 in vain, ahead of South Korea in the standings by the number of goals scored (2 against 4). Both teams have the same number of points (4) and a zero goal difference.

First in their group, Cristiano Ronaldo's Portugal has a good chance of avoiding Brazil in the 1/8 finals, who are trying to seal their first place in Group H against Cameroon in the evening.

Very quickly led to the score on a goal by Ricardo Horta (5th) and virtually eliminated, the South Koreans never abdicated, equalizing at close range by Young-gwon Kim (27th) before Hee-chan Hwang, who left for the limit of offside, does not snatch the decision in stoppage time (90th 1).

But they had to wait long minutes for the result of the other match: a third goal for Uruguay against Ghana would have eliminated them.

The South Americans thought they had done the main thing thanks to a double from De Arrascaeta (26th, 32nd). At the end of the match, they claimed a penalty for a foul on Edinson Cavani but it was not granted.

The Ghanaians, who could qualify, missed a penalty in the first half, very badly shot by André Ayew when the score was 0-0.