World: Poland and Lewandowski wake up against Saudi Arabia

Held in check by the Mexicans at the opening (0-0), the Poles won thanks to Piotr Zielinski (39th) and the first goal at this level from their star Robert Lewandowski (82nd). 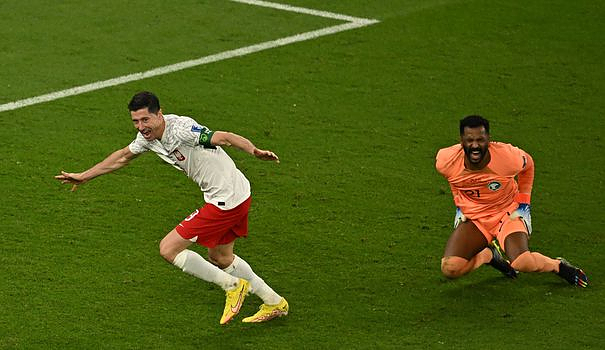 Held in check by the Mexicans at the opening (0-0), the Poles won thanks to Piotr Zielinski (39th) and the first goal at this level from their star Robert Lewandowski (82nd). Mute in four World Cup matches (three in 2018 and one in 2022), the FC Barcelona striker has finally freed himself.

Poland can also thank their goalkeeper Wojciech Szczesny, decisive on several occasions. She now has four points in Group C and regains hope in the race for the round of 16.

Victorious over the Argentinians to everyone's surprise in the first match (2-1), the Saudis may have some regrets after missing the equalizer from the penalty spot just before the break.

The Saudis were the first to be dangerous when Mohamed Kanno saw his shot deflected off the crossbar by Wojciech Szczesny (13th). Then it was Saudi striker Saleh Al-Shehri, scorer against Argentina, who saved his team by repelling a powerful header from Krystian Bielik (26th).

A quick recovery from Szczesny allowed the Poles to project themselves towards the Saudi goal. Lens player Przemysaw Frankowski, launched on the right side, crossed for Robert Lewandowski who served Piotr Zielinski, whose hard shot left the Saudi goalkeeper no chance (39th).

Just before half-time, Hervé Renard's team obtained a penalty, after recourse to the VAR, for a slight contact by Bielik on the calf of Al-Shehri. But Saudi captain Salem Al-Dawsari, author of a splendid goal against Argentina, came up against Szczesny. The goalkeeper of Juventus, imperial, repelled in stride the attempt of Mohammed Al-Bureik which had followed (45 1).

Surely remotivated by Hervé Renard at the break, as in the match against Argentina, the Saudis again caused panic in the Polish area, but Al-Dawsari failed to strike (55th).

After a new action in a small perimeter, the Al Hilal player sent a shot above the cage (60th).

In this very lively match, the Poles tried to double the lead but the crossbar repelled a header from Arkadiusz Milik (63rd), then an involuntary knee strike from Lewandowski (66th).

At the end of the match, the Saudis pushed to snatch the equalizer, in vain, like the distant attempt of Sahud Abdulhamid, passed next to the cage (78th).

But Robert Lewandowski came to bury Saudi hopes by taking advantage of a defensive error from Abdulelah Al-Malki to finally open his counter (82nd). The former center forward of Bayern Munich even had the opportunity to offer himself a double, but his stung ball did not deceive goalkeeper Mohammed Al-Owais (90th).

Poland will play their qualification against Argentina on Wednesday, with their backs to the wall after their inaugural defeat and who face Mexico in the evening.

The Saudis, who dream of qualifying in the eighth as during the epic World Cup-1994, will have to react against these same Mexicans.