World: Messi and Argentina in the quarters, the Netherlands in the sights

Goals and matches follow one another in Doha, but the world of football has taken the time to support its most illustrious living legend, "King" Pelé, ill and hospitalized for several days, with many wishes broadcast in Doha of recovery. 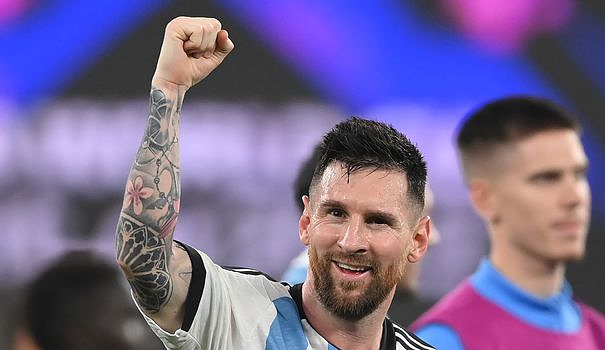 Goals and matches follow one another in Doha, but the world of football has taken the time to support its most illustrious living legend, "King" Pelé, ill and hospitalized for several days, with many wishes broadcast in Doha of recovery.

"Pray for the King," tweeted French star Kylian Mbappé, while the words "Pelé, recover quickly" were displayed on the facades of several iconic buildings in Qatar, such as the famous Aspire Tower, before the broadcast of a reassuring medical statement evoking a "stable" condition for Pelé.

"I want to reassure everyone. I am strong, and hopeful and continuing my treatment as always," the 82-year-old icon said in an Instagram post.

At the same time, at the Ahmed Ben Ali stadium, a small event happened: in his fifth World Cup, and for the thousandth game of his career, Messi finally scored in the knockout phase of a World Cup, c that is to say from the eighth!

This anomaly had not prevented him from reaching the final of the 2014 World Cup but the little Argentinian elf remedied it with style, opening the scoring with a low shot as he has scored so many in his long career (35th minute ). Or his 789th professional goal, club and selection combined!

It's because the seven-time Ballon d'Or has no more time to lose: at 35, the Argentine genius is "surely" playing his last World Cup, the last opportunity in his rich career to win the only trophy misses and would make him the equal of his compatriot Diego Maradona, crowned in 1986.

Incidentally, Messi notably joined Mbappé, his partner from Paris SG, at the top of the scorer rankings for the 2022 World Cup with three goals.

Julian Alvarez then doubled the bet (57th) but the Albiceleste could have avoided such a feverish end to the match after the reduction of the Australian score on an own goal from Enzo Fernandez (77th). All the Argentine people massed in the stands trembled, especially on a last burning attempt by the Australian Garang Kuol (90th 7) saved by the goalkeeper.

"It was a very physical match. Very happy with this victory. It's one more step," Messi savored at the microphone of Argentine television.

Four years after falling in the round of 16 against France (4-3), future world champion, this success propels Argentina to the rest of the tournament, where it will meet the Netherlands next Friday: this is the first poster known to the quarters and it's a rematch of the 2014 semi-final won on penalties by Messi and others (0-0 ap, 4-2 t.a.b.).

On the Dutch side, this return with great fanfare to the top 8 in the world concretizes the spectacular rebirth of the Oranje selection, absent from Euro-2016 and the World Cup-2018 in Russia then eliminated from the eighth of the Euro in 2021.

But this rewards the work of coach Louis van Gaal, a sharp technician with clear ideas, who had already led the Netherlands to the semi-finals in 2014 in Brazil, with the same recipes, defensive solidity and offensive realism.

At the Khalifa International Stadium, three goals from Memphis Depay (10th) and Daley Blind (45th 1) and Denzel Dumfries (81st) were enough for the Dutch to take the lead, despite the reduction in the score of Haji Wright (76th).

It's cruel for the "Team USA", which hoped to reach the quarter-finals, as in 2002, four years before hosting the 2026 World Cup on its soil, co-organized with Canada and Mexico.

Argentinians and Dutch will now be able to take a break for a few days before their quarter-final, scheduled for next Friday (8:00 p.m.) at the Lusail stadium, and watch the other favorites for final victory fight off until the end of the round of 16 on Tuesday.

Sunday (4:00 p.m.), Mbappé's France comes up against Robert Lewandowski's Poland and the pressure of a first match in Qatar. And the winner of this confrontation will challenge the survivor of an unprecedented England-Senegal duel in the evening (8:00 p.m.).