World: Ghana meets Uruguay for a place in eighth

Will the "Black Stars" manage to repeat the exploits of the 2006 and 2010 World Cups? In Germany, they had reached the eighth, eliminated by Ronaldo's Brazil. 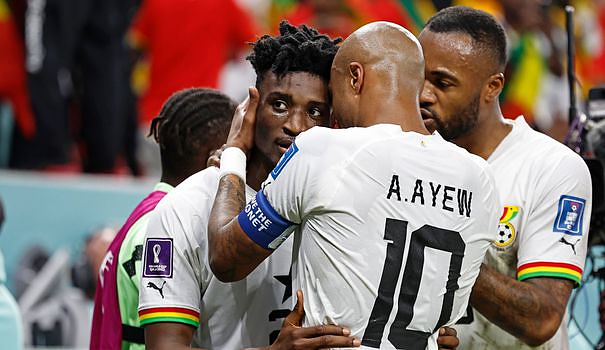 Will the "Black Stars" manage to repeat the exploits of the 2006 and 2010 World Cups? In Germany, they had reached the eighth, eliminated by Ronaldo's Brazil. In South Africa, they had been taken out in the quarter-finals on penalties, during a memorable match against Uruguay.

In Qatar for their fourth participation in the World Cup, Otto Addo's players have at least given themselves the means to afford a sort of round of 16 against Uruguay in four days.

The opportunity will be great on Friday at the Al-Janoub stadium in Doha, to avenge the hand of Luis Suarez at the 2010 World Cup, at the end of a legendary extension, and the missed penalty of Gyan Asamoah, which could have made Ghana the first African selection in the semi-finals of a World Cup.

Captain André Ayew is the only one of the 26 Ghanaian players present in Qatar in 2022 who was already there twelve and a half years ago.

"It will be a different approach against a difficult team. We will have to be at our best to hope to beat them, but I have confidence. This incident goes back a long time, and we should not necessarily think of it in terms of revenge", explained the coach Otto Addo at a press conference.

On Monday at the air-conditioned Education City Stadium in Doha, the Ghanaians blew hot and cold for 90 minutes. Dominated by Koreans well in place for twenty minutes, they opened the scoring by Mohammed Salisu (24th), a little against the course of the game, on a free kick badly negotiated by Kim Min-jae.

They probably thought they had done the hardest part thanks to Mohammed Kudus (34th), ideally served by André Ayew ten minutes later.

But the Taeguk Warriors, through their center forward Cho Gue-sung, sounded the South Korean revolt at the start of the second half, three times from the head. The first was repelled by Ghanaian goalkeeper Lawrence Ati Zigi, but the other two found the nets (58th, 61st).

With two everywhere, the Ghanaians found the necessary resources to seek victory by Kudus (68th), named best player of the meeting.

"What is most important is to have won. The energy is good in the team. The whole country is proud of what we do", commented soberly Kudus, the first Ghanaian to register a doubled in the World Cup.

After the eleven minutes of additional time and the successive waves of South Korea, the Black Stars were able to raise their arms to the sky, and then gathered in a circle after the meeting to celebrate the victory.

For South Korea, this defeat is almost synonymous with elimination, while Paulo Bento's players, excluded after the final whistle, will have to achieve a feat against Cristiano Ronaldo's Portugal to hope to see the knockout stage.