France approaches the defense of its title diminished by the package of several executives or safe bets (Pogba, Kanté, Maignan, Kimpembe, Nkunku), and here it is suspended from a soap opera which it would have done well around the Ballon d'Or. 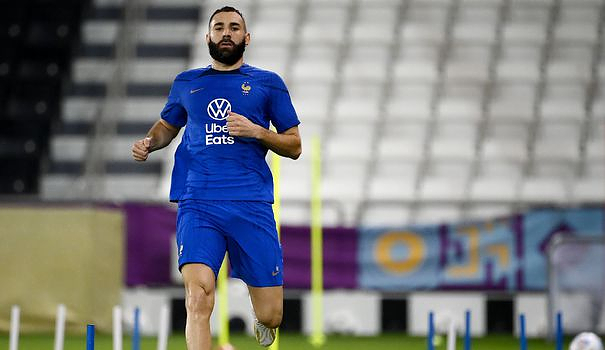 France approaches the defense of its title diminished by the package of several executives or safe bets (Pogba, Kanté, Maignan, Kimpembe, Nkunku), and here it is suspended from a soap opera which it would have done well around the Ballon d'Or.

Since the reunion of the Blues on Monday, the center-forward of Real Madrid has not participated in any collective training, contenting himself with running at the start of the session before carrying out exercises away from the group, under the supervision of the trainer physical.

Didier Deschamps had hoped to see his N.19 join the rest of the team on Thursday for the first scheduled work session in Doha. The coach had to resolve to see him from the side, with the other injured Raphaël Varane, practicing tonicity exercises, at admittedly sometimes high intensity.

- "Very serene" according to Tchouaméni -

Simple precautionary measure, or deeper problem? Publicly, the speech is reassuring both from those around him and from his partners, despite an unavailability that has been stretching for several weeks.

"He is very calm, he has a lot of experience, he knows his body and if he didn't play, it was because he didn't consider himself capable of helping the team as much as possible," said argues Aurélien Tchouaméni, midfielder of Real and the Blues, Thursday before an assembly filled with journalists from around the world.

The duel against "Socceroos" on Tuesday (10:00 p.m. local, 8:00 p.m. Paris) is nevertheless fast approaching and Benzema continues his comeback on tiptoe, he who played less than half an hour (November 2 against Celtic Glasgow) since their last match played in full, on October 19 against Elche in La Liga.

Three days later, Real Madrid communicated on a "muscle fatigue in the quadriceps of the left leg" concerning the striker, just haloed with his Ballon d'Or and left to rest for the next meeting.

"I prefer to lose (Luka) Modric or Benzema for a match rather than for a month", then justifies Carlo Ancelotti, convinced that the passage to the infirmary will be short-lived. But at the end of October, the tone changed on the side of the White House coach.

Several observers have speculated that Benzema has been deliberately saving himself in recent weeks ahead of the World Cup, his second after 2014.

Since August, the striker trained in Lyon has taken part in twelve matches or, for comparison, ten less than Kylian Mbappé with Paris SG and the Blues.

The lack of pace may raise some doubts about his ability to repeat the efforts in Qatar, where temperatures exceed the 30 degree mark, even if some specialists qualify the line.

"For me, at the physical level, the injured players who cut ten days before the competition, it is always beneficial because (...) they recover physical and mental freshness", explained Nicolas Dyon, ex - physical trainer from Nice and Rennes in particular, before the rally.

This is all the more true for Benzema since, during last season, "he was overworked. So it may be a blessing in disguise, provided he does not relapse", he specified to the AFP.

Asked at a press conference on Friday, Adrien Rabiot extended this reasoning: "It's better when you have the opportunity to chain matches. But Karim is a special case, it's less of a handicap than for a midfielder. He is a very high level player who knows how to manage himself".

If he is not restored in the first game, "it will be in the second", relativized the middle of Juve, like Lucas Hernandez after him. "If unfortunately they (Varane and Benzema, editor's note) do not arrive in time, we have a fantastic group" with players all "holders in big clubs", supported the defender of Bayern.